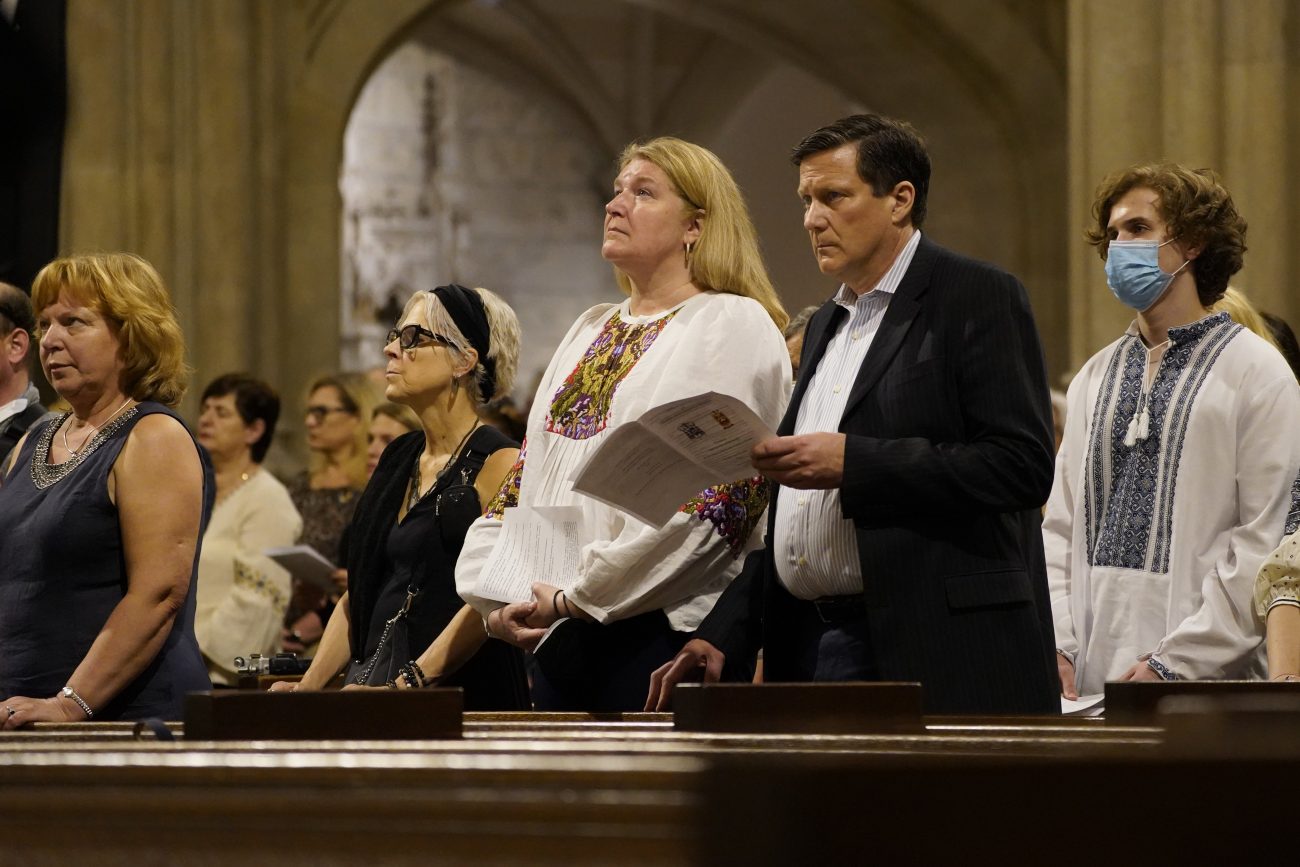 Participants gather for a memorial prayer service for the victims of the Russian invasion of Ukraine at St. Patrick's Cathedral in New York City June 11, 2022. The ecumenical event was co-hosted by the Archdiocese of New York and the Ukrainian Catholic Archeparchy of Philadelphia. (CNS photo/Gregory A. Shemitz)

NEW YORK (CNS) — New York Ukrainian Catholics and other worshippers found community and solace June 11 at St. Patrick’s Cathedral where Cardinal Timothy M. Dolan of New York and Archbishop Borys Gudziak, head of the Ukrainian Catholic Archeparchy of Philadelphia, led an evening memorial prayer service for the victims of the war in Ukraine.

It was a traditional service for the deceased, known in the Eastern Catholic Church as “panakhyda.” The Ukrainian Chorus Dumka of New York sang, and throughout the service there were prayers and readings in English and Ukrainian.

Many of the faithful gathered to pray for their family members and friends in their homeland and for the very future of the country, which was invaded by Russian forces Feb. 24.

Archbishop Gudziak, who also is the head of external relations for the worldwide Ukrainian Catholic Church, estimated that during the length of the 45-minute service another 10 to 20 Ukrainians would be killed and another 60 injured. He said the overall death toll of Ukrainians cannot be accurately counted because so many of those who have been killed have been buried in mass graves.

After the service, the archbishop told reporter Magee Hickey of PIX 11 News that to help Ukraine, people must “pray, be informed, advocate and help however you can.”

“There’s a lot of people who need food, medicine, and the country needs defensive aid,” he added. 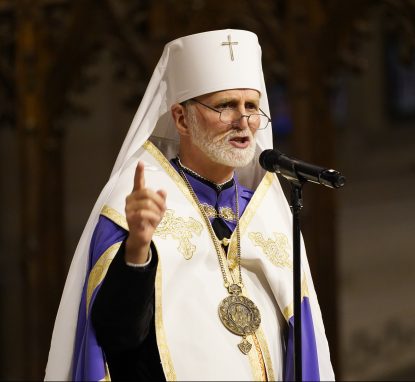 Archbishop Borys Gudziak of the Ukrainian Catholic Archeparchy of Philadelphia speaks during a memorial prayer service for the victims of the Russian invasion of Ukraine at St. Patrick’s Cathedral in New York City June 11, 2022. The ecumenical event was co-hosted by the Archdiocese of New York and the Ukrainian Catholic Archeparchy of Philadelphia. (CNS photo/Gregory A. Shemitz)

According to Hickey, one estimate put the amount of relief American Catholics have donated for Ukrainians at $100 million.

Cardinal Dolan said that many Americans are surprised by the “deep faith” of the Ukrainian people. “They didn’t realize how faithful they are and have such a beautiful religious diversity — Jewish, Islamic and Christian.”

In May the cardinal made a brief visit to Lviv, Ukraine, as part of a trip by a New York church delegation to visit and express solidarity with Ukrainian refugees, including those in the bordering countries of Poland and Slovakia.

Cardinal Dolan and Archbishop Mieczyslaw Mokrzycki, the Latin-rite archbishop of Lviv, met with the leadership of the Ukrainian Catholic University, families of displaced Ukrainians who found refuge during the war and student volunteers.

The U.S. prelate told the Religious Information Service of Ukraine he was surprised and inspired by Ukrainians he met. “I thought I would come to Ukraine and see great depression,” he said. “Yes, I see sadness and pain, but I am impressed by the vitality, hope and solidarity of Ukrainians.”

At St. Patrick’s Cathedral after the prayer service, Sergiy Kyslytsya, Ukraine’s ambassador to the United Nations, told Pix 11’s Hickey that Ukraine will win the war. “Victory is imminent. It will unfortunately cost more additional lives,” he said.

As she was leaving St. Patrick’s, Ukrainian New Yorker Sofika Pysanky said: “Yes, we will (win). If we don’t, that’ll be the end of Ukraine.”

More than 13 million people have fled their homes since Russia’s invasion of Ukraine, according to the United Nations. Almost 5 million have left for neighboring countries, while 8 million people are thought to be displaced inside Ukraine itself, the U.N. said.

The world body also estimated that hundreds of thousands of Ukrainians have returned to their home country — especially to cities. 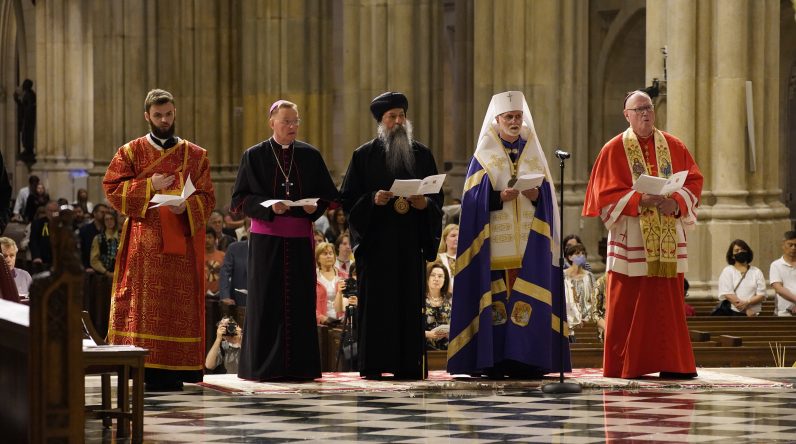 NEXT: As charter turns 20, trust in bishops is slow to return, cardinal says