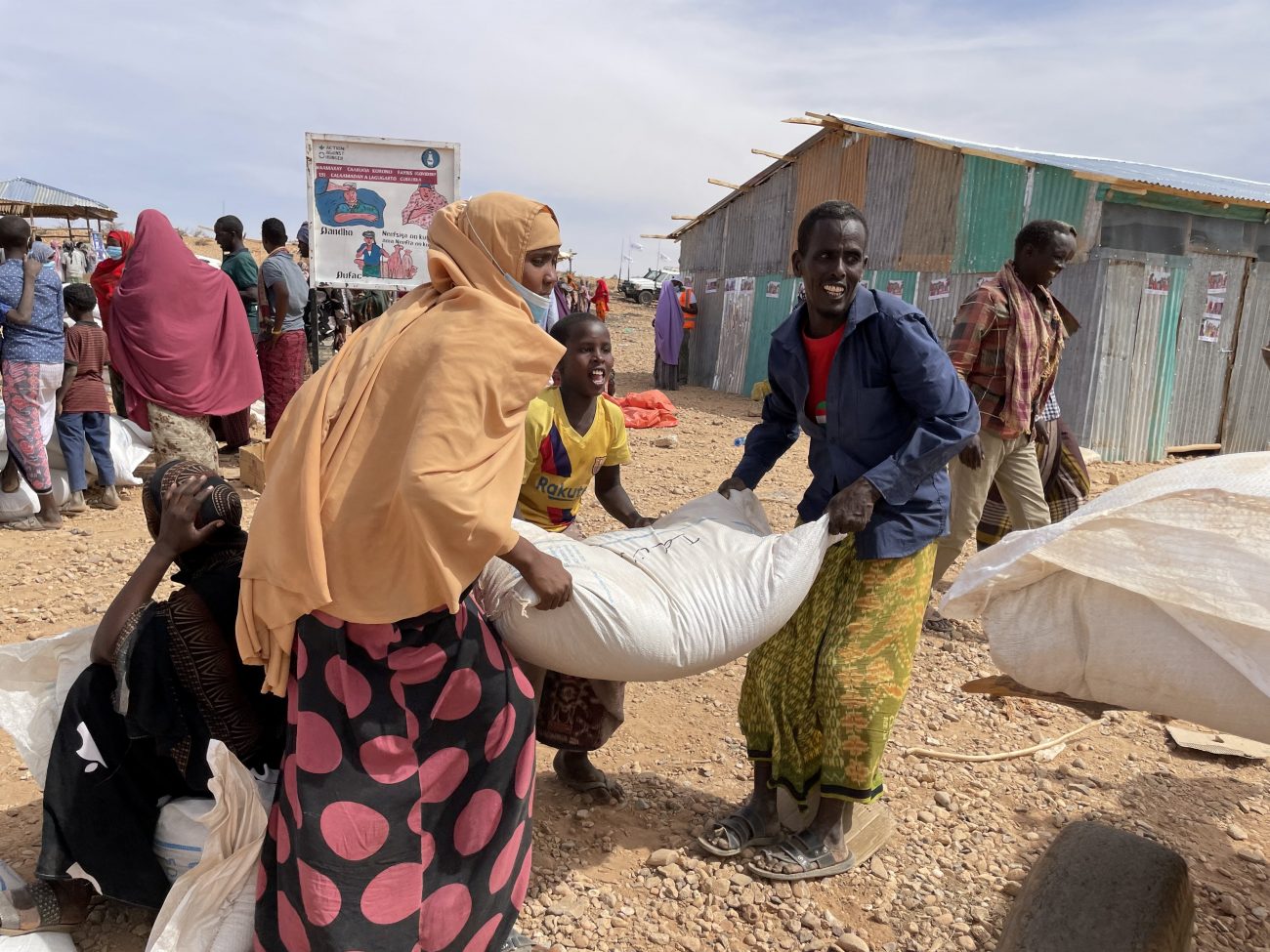 People receive bags of relief grains at a camp for the internally displaced people in Adadle, Ethiopia, Jan. 22, 2022. The war in Ukraine, ongoing instability in Tigray and global inflation -- peaking at 43% for food items in Ethiopia in April -- have placed additional burdens on humanitarian and pastoral efforts in Ethiopia, where hardships once contained regionally are extending throughout the country. (CNS photo/Claire Nevill, World Food Program handout via Reuters)

In Alitena, a remote village in Ethiopia’s northern Tigray region, the Daughters of Charity host a traditional coffee ceremony for women in the community. The conversation, however, is unlike the usual spirited conversations at a coffee ceremony.

Here, the women gather to support each other in their grief, mourning and trauma in the wake of the terror and violence that has raged in the region since November 2020, when war broke out between the Tigray People’s Liberation Front and the Ethiopian armed forces.

“Spiritual group counseling was found to be such a healing exercise for the people who went through unspeakable atrocity, killing of innocent civilians in their homes,” said Sister Lemlem Redda, who heads the project.

“Bringing together the affected families, including the immediate community members, enabled them to comfort each other, mourn together, and pray to God to enable them to cope with the trauma,” she said.

Trauma and grief are rife in the villages across the region, devastated by a war that has killed between 50,000 and 100,000, an additional 150,000 to 200,000 from starvation and more than 100,000 from lack of medical attention, according to estimates provided by researchers at Ghent University in Belgium.

The entire Tigray region has been facing food scarcity for months — exacerbated by the Ethiopian government’s initial refusal to allow humanitarian aid into the region.

But the war in Ukraine, ongoing instability in Tigray and global inflation — peaking at 43% for food items in Ethiopia in April — have placed additional burdens on humanitarian and pastoral efforts in Ethiopia, where hardships once contained regionally are extending throughout the country.

“We are not able to do what we planned earlier,” said Argaw Fantu, who directs the work of the Catholic Near East Welfare Association, a papal agency, in Ethiopia. “So, everything is now being diverted and redirected.”

The needs have increased dramatically since his 2022 program budget was approved, he said.

Inflation — in addition to ongoing natural and manmade calamities — has caused greater need for basic assistance and less purchasing power to address these needs, he said. Among the challenges are the ever-increasing costs involved in trying to access remote villages, such as Alitena, in the country’s northern, war-devastated Tigray region.

“For these reasons, the approved grants are not enough, and institutions are not able to properly address the needs of the beneficiaries,” he said.

Back in Alitena, for instance, the Daughters of Charity redirected CNEWA-funded provisions intended for a nutritional support program for school children to feed the most vulnerable among the general population, including those internally displaced by the war, the elderly and people with special needs. But these funds are insufficient for the need, said Fantu.

While the Ethiopian government lifted restrictions to deliver aid to Tigray two months ago, the challenge to reach people in areas he described as “inaccessible” remains, even for the largest humanitarian organizations.

Getting aid to those who need it most is further complicated by the lack of communications infrastructure in Tigray, which has not yet been restored. Aid is not reaching these areas as quickly as it was before the war in Tigray, said Fantu, and in some cases food or cash do not arrive “in time.”

Fantu said he had to find alternative ways to transfer funds to these remote areas, where CNEWA provides support to six schools, a major seminary and the clergy.

As well, with the current humanitarian truce in Tigray, the priests who were evacuated at the height of the conflict are returning to their parishes. However, many rectories and church buildings were destroyed, and the church is seeking assistance for reconstruction or repair. Many schools, too, need rebuilding, but funds are very limited.

“We really feel the pain because we are not able … to deliver the support,” he said.

The war in Ukraine has only worsened the situation, said Fantu, citing the rising fuel prices and their impact on the cost of all consumable products and the transport of goods.

Sanctions against Russia and Russia’s blockade of Ukraine’s sea ports have limited exports of wheat, gas and oil, affecting supply worldwide. However, countries already experiencing food scarcity, such as Ethiopia, are hit hardest.

At the end of the general audience June 1, Pope Francis appealed for an end to the blockade of grain exports from Ukraine, “on which the lives of millions of people depend, especially in the poorest countries.”

A week later, the United Nations also appealed for an end to the blockade and for the food and fertilizer produced by Ukraine and Russia to be “brought back into world markets.”

The impact of inflation is countrywide, and families who could provide for themselves previously now need basic assistance. Parents can no longer afford tuition fees and schools are absorbing the cost, leaving them without the means to justly compensate teachers, said Fantu.

“Everything is interrelated,” he said. “The situation is getting worse across the country.”

The current drought in the Horn of Africa — the worst in 40 years, according to the United Nations — and the 200% increase in the cost of fertilizer, which is a Russian export and beyond what most Ethiopian farmers can afford, do not paint a hopeful picture for food security in Ethiopia in the foreseeable future.

Without the assurance of more funding from donors, Fantu is left managing the shortfall.

“The only way is to do as much as possible with what is available, to try to respond at the minimum,” he said.

“What we are trying to do is just to share their pain,” he said. “What can we do more than that?”

While some planned building projects have been postponed or simplified, cutting programs altogether, especially food assistance and education, is not an option, said Fantu.

“And so, we hope. We always have to be people of hope.” 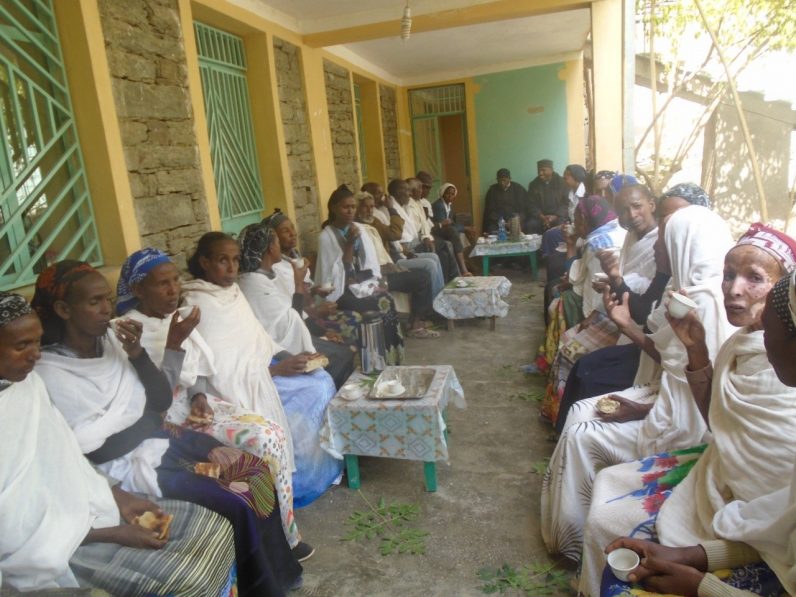 The Daughters of Charity in Alitena, Ethiopia, host a traditional coffee ceremony for mothers traumatized by the war in the Tigray region. The entire Tigray region has been facing food scarcity for months — exacerbated by the Ethiopian government’s initial refusal to allow humanitarian aid into the region. (CNS photo/CNEWA/Addis Ababa)

PREVIOUS: Pope to visit Canada, limiting participation to one hour at various events