Spiritual and human care: Chaplains help Ukrainian soldiers with both 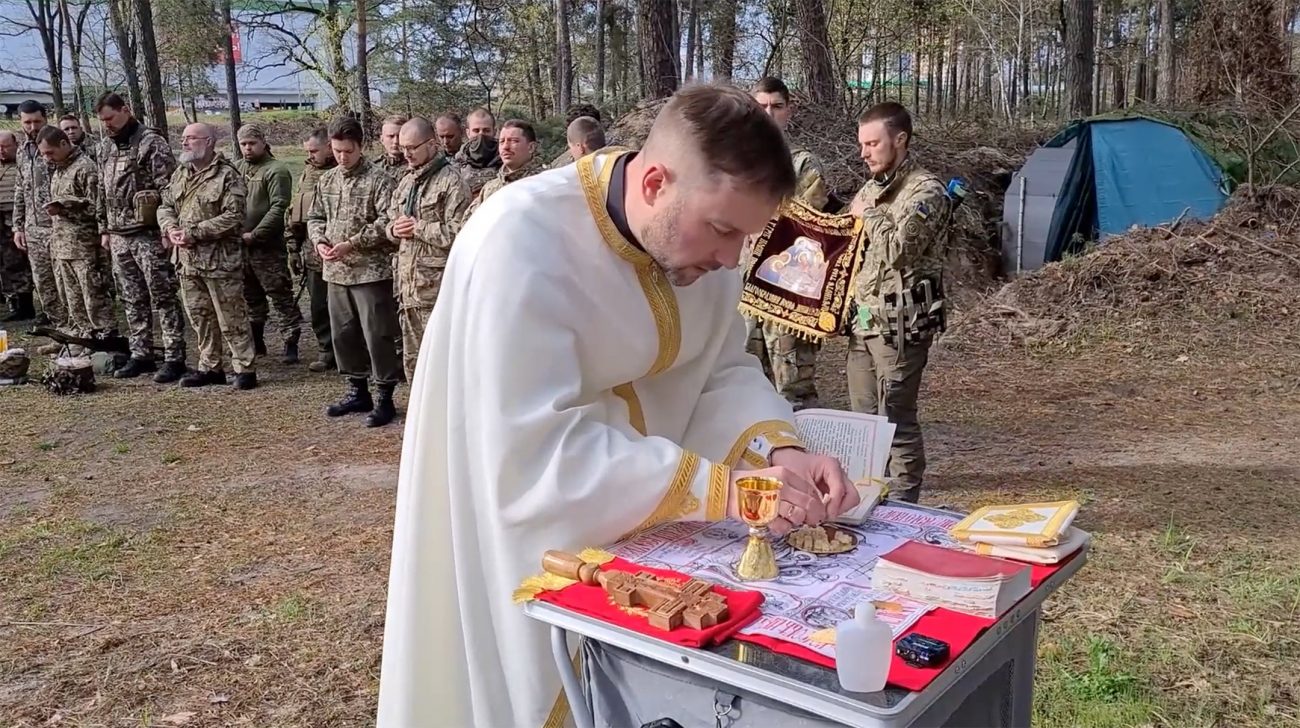 Father Rostyslav Vysochan, a military chaplain, celebrates a Divine Liturgy with soldiers in an undisclosed location in Ukraine in June 2022. (CNS photo/Voznyak Production)

KYIV, Ukraine (CNS) — As Russia’s war on Ukraine drags on and joint funerals are held for the soldiers who die, Catholic military chaplains say they still see faith, hope and humanity in the soldiers with whom they minister.

“It is a very special vocation to be a man of God among those who are called to defend, to protect; it’s very challenging, but it’s a great vocation to be a defender of humanity dressed in a military uniform, especially in times of war,” said Jesuit Father Andriy Zelinskyy, coordinator of chaplains for the Ukrainian Catholic Church.

“The mission of military chaplains is to stay nearby,” he told Catholic News Service in June. “A human being in a military uniform needs a shoulder to lean on, needs ears to be heard, needs the heart to be open to his or her fears, his or her uncertainties. The voice of the military chaplain in such a situation sounds like the words of Christ.”

Lubomyr, a military instructor who gave only his first name, said the Ukrainian army is “not teaching our soldiers to be killing machines. We don’t go there to kill because we want to or love to. No,” the army is fighting because the Russians “came to our house. They threaten our women, our children. They capture our villages, our cities.”

A veteran who fought Russian-backed separatists in eastern Ukraine in 2014, Lubomyr said his country really was not prepared for the large-scale Russian war on his country. In fact, “if it weren’t for volunteers and chaplains, to be honest, our soldiers would have been hungry at the beginning of the war, and they wouldn’t have weapons.”

Father Rostyslav Vysochan, another chaplain, explained that “in the most active phase of hostilities when the front lines had not even been determined, about 20 or 22 trucks with humanitarian aid were transferred from the western borders of our country through a network of military chaplains.”

“The scale of this war is different from the previous period,” when Russia annexed Crimea in 2014 and the fighting began in the eastern regions of Donetsk and Luhansk. 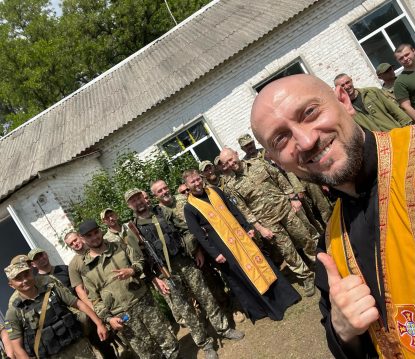 Jesuit Father Andriy Zelinskyy, coordinator of chaplains for the Ukrainian Catholic Church, gives a thumbs up after praying with soldiers in Ukraine June 13, 2022. (CNS photo/courtesy of Father Zelinskyy)

Now, he said, “it is very difficult to find a place to pray the Divine Liturgy for an hour and, moreover, to gather people there. The Divine Liturgy is served somewhere in a safer place. Then, with the Holy Mysteries, the chaplain goes directly to the battle line and there confesses and distributes Communion quickly,” he said, adding that it is not unusual for penitents to be “adult men who are confessing for the first time in their lives.”

“When I first set out in these circumstances, I was certain I would see more frustration, more pessimism out there,” Father Vysochan said. “But my experience was such that, in fact, in the eyes of our Ukrainian soldiers, I saw light and hope.”

Father Zelinskyy said he believes the difference comes from the soldiers knowing they have “their own vocation to defend life itself, to be the frontline while fighting for the values, for common sense, for life itself.”

“What I witness on the frontlines nowadays,” he said, is “the high level of spirit of the Ukrainian soldiers, because they know what they do and they know why they’re there.”

But the Russian soldiers, he said, “definitely don’t know what they are doing in Ukraine.”

Lubomyr said that in war, “There is such a small difference between a normal soldier and those who create such madness by killing civilians.” They do not respect the lives of others and “there is nothing sacred in them anymore. It is this small difference that the chaplain helps us maintain. There is a limit that cannot be crossed.”

Reporting by Voznyak Production in Lviv and Kyiv for Catholic News Service. 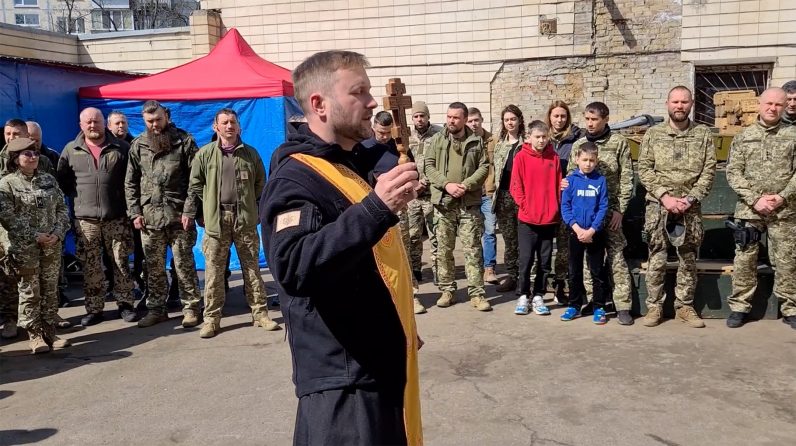 Father Rostyslav Vysochan, a military chaplain, prays with soldiers in an undisclosed location in Ukraine in June 2022. (CNS photo/Voznyak Production)