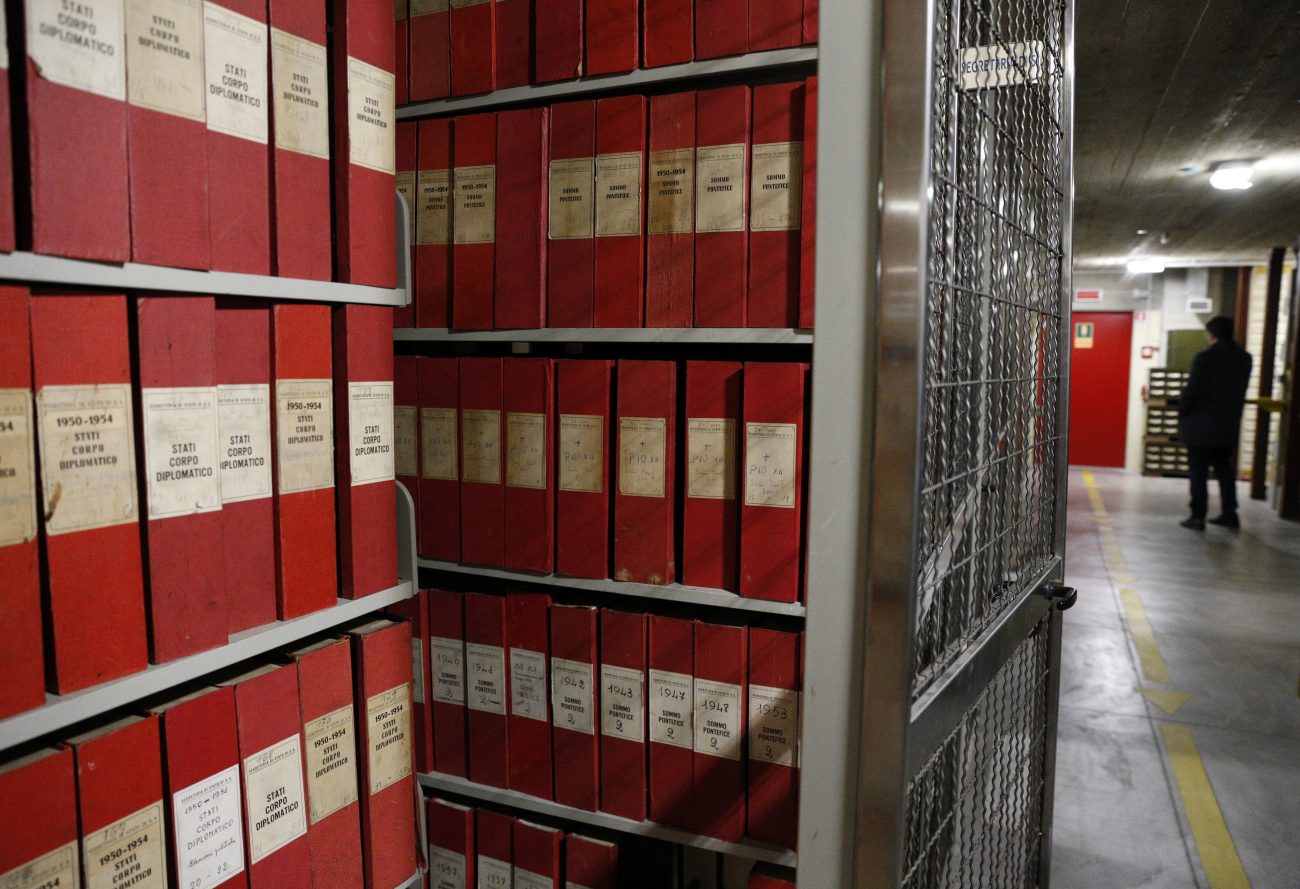 Materials from the pontificate of Pope Pius XII are pictured in the Vatican Apostolic Archives in this Feb. 27, 2020, file photo. The Vatican announced June 23 it will put online documentation detailing Jewish people's petitions for help to Pope Pius XII during World War II. (CNS photo/Paul Haring)

VATICAN CITY (CNS) — Thousands of records detailing requests to the Vatican made by Jewish people persecuted by the Nazis will be made available online to the public, the Vatican announced.

In a statement released June 23, the Vatican said universal access to the documentation, which has been available to researchers since March 2020, was made “at the request of the Holy Father.”

The documentation, titled “Ebrei” (“Jews”), aims “to preserve the petitions for help from Jewish people all over Europe, received by (Pope Pius XII) during the Nazi-Fascist persecutions,” the statement said.

“The archival series consists of a total of 170 volumes, equivalent to nearly 40,000 digital files. An initial 70% of the complete material will be made available initially, before being integrated with the final volumes that are currently being worked on,” the Vatican said.

While the Vatican made no direct link, the decision to make the documents available online closely follows controversy over a new book by historian David I. Kertzer.

In his book, “The Pope at War,” Kertzer suggested that Pope Pius remained silent out of fear of the Nazis and that the Vatican prioritized saving Jewish converts to Catholicism from persecution.

In an article for the Vatican newspaper, Archbishop Paul R. Gallagher, Vatican foreign minister, highlighted the case of Werner Barasch, a Jewish university student from Germany who was held at a concentration camp in Miranda de Ebro, Spain.

Barasch wrote a letter in 1942 to an Italian friend and asked that Pope Pius send the apostolic nuncio in Madrid to secure his release so he could travel to the United States and be reunited with his mother.

Archbishop Gallagher said that while two documents revealed that the Vatican Secretariat of State had intervened, no other paperwork existed that revealed the young man’s fate.

However, an internet search revealed that “he was released from the Miranda camp the year after his appeal in a letter to the pope, and that in 1945, he was finally able to join his mother in the United States,” the archbishop said.

The documentation being released online, he added, details more than 2,700 cases of requests for help from the Vatican, primarily for families, but also for groups of people.

“Thousands of people persecuted for their membership to the Jewish religion, or for merely having ‘non-Aryan’ ancestry, turned to the Vatican, in the knowledge that others had received help, like the young Werner Barasch himself writes,” Archbishop Gallagher said.

Archbishop Gallagher said the cases were given the name “Pacelli’s list,” referring to Pope Pius’ given name, Eugenio Pacelli, echoing “Schindler’s list,” the title given to the list of those saved by the German industrialist Oskar Schindler, who saved the lives of over a thousand Jews during World War II.

“Although the two cases differ, the analogy perfectly expresses the idea that people in the corridors of the institution at the service of the pontiff worked tirelessly to provide Jewish people with practical help,” he said.

The Vatican foreign minister said that the release of the documents to the public will aid “descendants of those who asked for help to find traces of their loved ones from any part of the world.”

It also will “allow scholars and anyone interested to freely examine this special archival heritage from a distance,” the archbishop said.