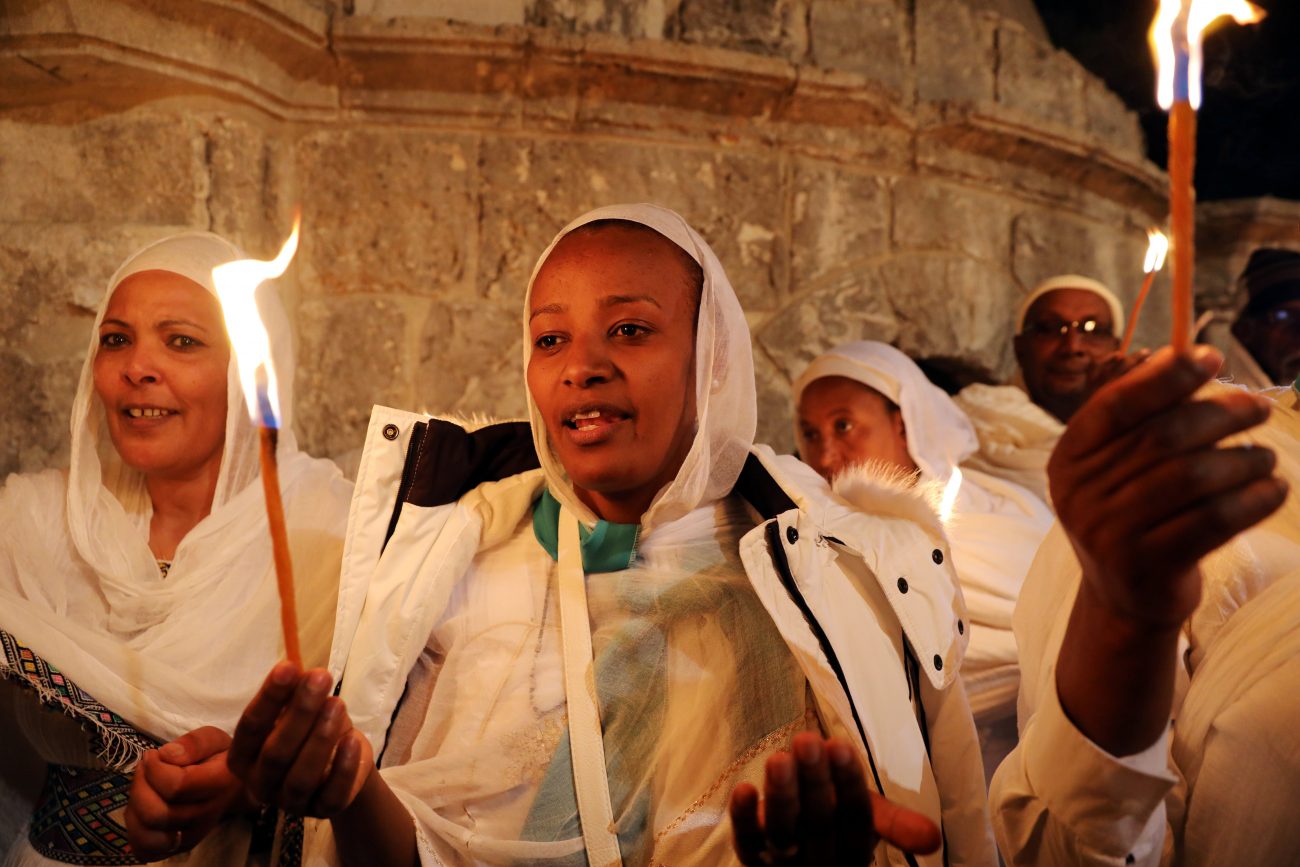 Ethiopian Orthodox worshippers hold candles during the Holy Fire ceremony on Holy Saturday in the Church of the Holy Sepulcher in the Old City of Jerusalem in this April 7, 2018, file photo. Although Western and Eastern Christians celebrate Easter on different dates most years, since the Second Vatican Council, the Vatican has been open to a common date for Easter. (CNS photo/Ammar Awad)

VATICAN CITY (CNS) — The theological dialogue between the Catholic Church and the Oriental Orthodox Churches has reached a point where it seems appropriate to consider expanding the opportunities for the faithful of any of the churches to receive the sacraments from one another when they are not available in their own community, Pope Francis said.

“Based on the theological consensus noted by your commission, would it not be possible to extend and multiply such pastoral arrangements, especially in contexts where our faithful are in minority and diaspora situations?” the pope asked members of the Joint International Commission for Theological Dialogue between the Catholic Church and the Oriental Orthodox Churches.

Welcoming the commission members June 23, Pope Francis said that “ecumenism always has a pastoral character” and is not simply about theological ideas.

“Among our churches, which share apostolic succession, the broad consensus revealed by your commission not only about baptism, but also other sacraments, should encourage us to deepen a ‘pastoral ecumenism,'” he said.

In 1984, St. John Paul II and the head of the Syriac Orthodox Church signed a declaration that “in certain circumstances authorizes the faithful to receive the sacraments of penance, Eucharist and anointing of the sick from either community,” Pope Francis noted. And a 1994 agreement allowed Catholics and members of the Malankara Orthodox Syriac Church to receive the sacrament of matrimony from either church.

“This was made possible by looking at the concrete reality of the members of the people of God and their good, which is superior to ideas and historical differences,” the pope said. The agreements focus on “the importance that no one be left without the means of grace.”

The commission is completing what Pope Francis described as “an important study on the sacraments, a document that demonstrates the existence of a broad consensus and, with the help of God, can mark a new step forward toward full communion.”

The Oriental Orthodox churches, which are in communion with one another, trace their origins to the Christian communities that did not accept the wording of the Council of Chalcedon’s definition in 451 that Christ was fully human and fully divine. Between 1971 and 1996, the Catholic Church and the individual Oriental Orthodox churches resolved their differences over the Chalcedon statement.

Pope Francis insisted at the audience that for pastors of all the churches, the good of souls is more important than ideas or historical controversies.

Pope Francis also insisted the “ecumenism of daily life” lived by the faithful of the churches must be taken seriously in theological discussions and recognized as a place where God is at work.

Especially in the Middle East, he said, Christians often experience more unity than their churches’ theology would convey, especially through “the ecumenism of suffering, the common witness to the name of Christ, sometimes even at the cost of their lives.”

So, the pope said, the reflection of theologians should focus “not only on the dogmatic differences that have arisen in the past, but also on the current experience of our faithful.”