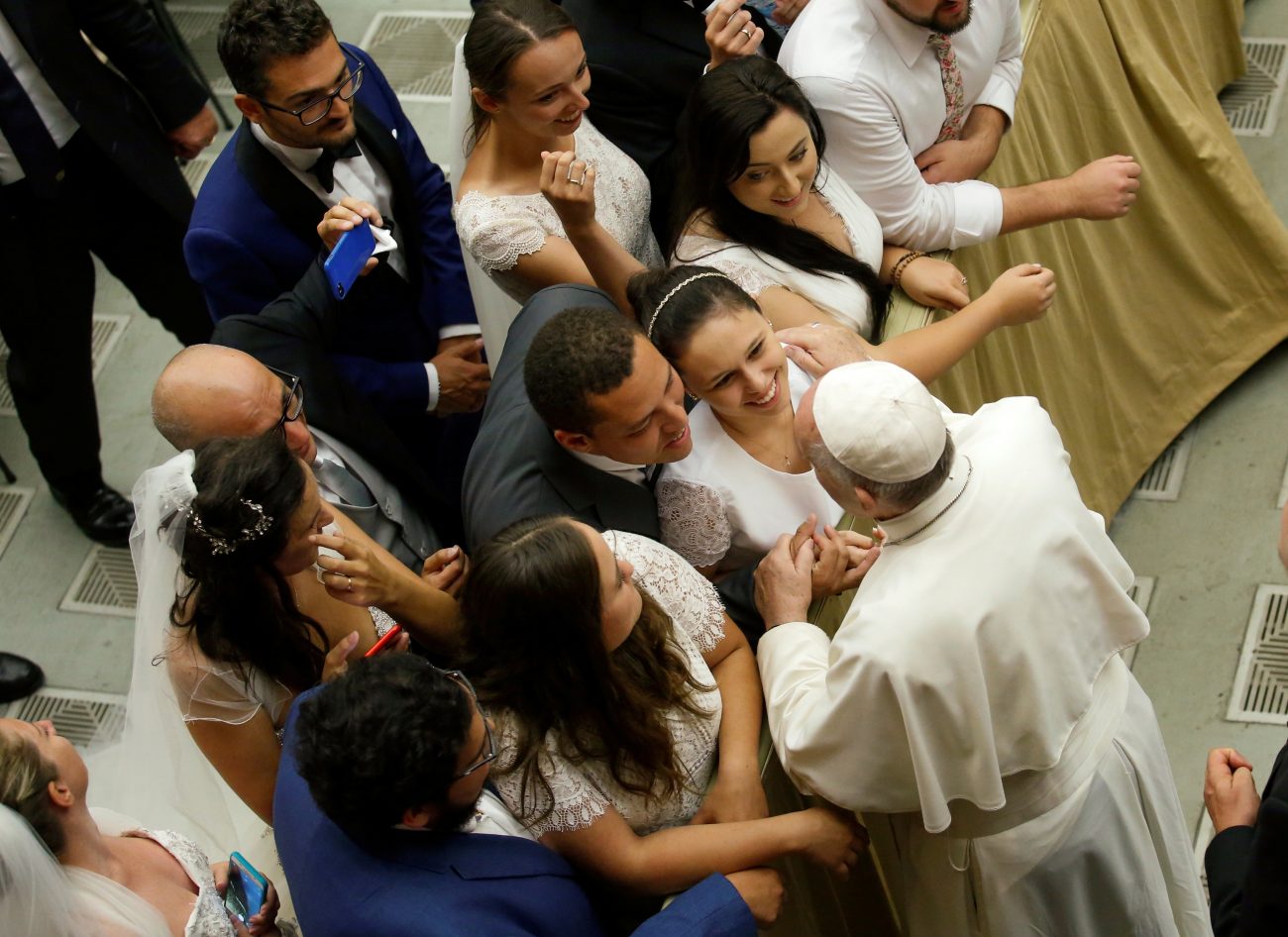 Pope Francis greets a group of newlyweds during his general audience in Paul VI hall at the Vatican Aug. 21, 2019. (CNS photo/Remo Casilli, Reuters)

VATICAN CITY (CNS) — Saying “superficial” marriage preparation programs leave many couples at risk of having invalid marriages or unprepared to cope with the struggles that arise in every marriage, Pope Francis endorsed suggestions for a yearlong “marriage catechumenate” drafted by the Dicastery for Laity, the Family and Life.

“With too superficial a preparation, couples run the real risk of having an invalid marriage or one with such a weak foundation that it falls apart in a short time and cannot withstand even the first inevitable crises. These failures bring with them great suffering and leave deep wounds in people,” the pope said.

The pope wrote the introduction to the dicastery’s “Catechumenal Itineraries for Married Life,” a document released in Italian and Spanish by the Vatican June 15.

Pope Francis said he hoped the document would be followed by another providing guidance and clear suggestions for accompanying couples “who have experienced the failure of their marriages and live in a new relationship or have been remarried civilly.”

While providing guidance, the pope said, the document also must be adapted for local situations and for the people involved. “It is an outfit that must be ‘made to measure’ for the people who will wear it.”

The document is not a marriage preparation course, the dicastery said, but provides indications for launching “a catechumenal itinerary for married life,” designed to help young people understand the sacrament, prepare engaged couples to celebrate their marriage and support newlyweds in the first years of their married life.

In addition to general presentations to children and teens about marriage as a vocation, the actual “marriage catechumenate” for couples should last about a year and begin with a celebration or “rite of engagement,” the dicastery said. The second phase should include a few months of more immediate preparation and a pre-wedding retreat just before the wedding. The third phase of assisting newlyweds should last two or three years.

The parish pastoral team, it said, will have to be sensitive and discerning in situations where the engaged persons or just one of them refuses to participate in the catechumenate.

The dicastery suggested dioceses and eparchies first establish a “pilot project” or consider the design of their marriage preparation itinerary to be “experimental,” with a fixed time for reviewing and making necessary adjustments.

“The dwindling number of people, in general, getting married, but also and especially the short duration of marriages, even sacramental ones, as well as the problem of the validity of celebrated marriages, constitute an urgent challenge, which puts at stake the fulfillment and happiness of so many lay faithful in the world,” the dicastery said, explaining why the guidelines were necessary.

Citing calls in the church going back to the 1950s for a more serious preparation to celebrate the sacrament of matrimony, the dicastery said that, like with the preparation of adults for baptism, time and energy should be devoted to helping couples prepare to live the Christian vocation of marriage.

By speaking of a marriage “catechumenate,” the dicastery said, it wanted to make clear that the goal is not simply to pass on church teaching about sexuality, marriage and married life — although those are essential — but to help couples recognize and thrive in “the mystery of sacramental grace, which belongs to them by virtue of the sacrament: to bring to life the presence of Christ with them and among them.”

After all, it said, for Catholics matrimony is not a one-day celebration, but “it is a vocation, a journey to holiness that embraces one’s entire life.”

While not presenting a complete curriculum, the dicastery said preparation should: last long enough to allow couples time for real reflection and maturation; place faith and an encounter with Christ at the center; be “articulated in stages, marked — where possible and appropriate — by rites of passage to be celebrated within the community”; and include “formation, reflection, discussion, dialogue, liturgy, community, prayer and celebrations.”

“The marriage catechumenate is not preparation for passing an exam but for living a life,” it said, adding that the challenge can be greater in countries where many, or even most, couples live together before marriage.

The preparation should include encouraging couples to observe “premarital chastity” so that rather than “becoming fixed on the physical instrumentalization of the other,” they focus on dialogue and getting to know each other better, it said. “Even in the case of cohabiting couples, it is never useless to speak of the virtue of chastity. This virtue teaches every baptized person, in every condition of life, the right use of one’s sexuality.”

In most cases, the dicastery said, preparing for marriage will “require gradualness, welcome and support, but also the witness of other Christian spouses to welcome and be present along the way. Therefore, it is important that more space be given in communities to the active presence of spouses as spouses, as agents of marriage ministry, and not just as individual believers.”

The couples engaged in ministry need training and education, however, the document said. “Some complex issues pertaining to marital sexuality or openness to life — such as responsible parenting, artificial insemination, prenatal diagnosis and other bioethical issues — have strong ethical, relational and spiritual repercussions for spouses and require specific formation and clarity.”

Getting to know the couples and their beliefs is crucial, the document said.

“In the event that they explicitly and formally reject what the church intends to accomplish when celebrating marriage, the couple cannot be admitted to the sacramental celebration,” it said. However, if there is an “imperfect disposition,” they can be married, but the priest and couples charged with ministry to families must follow up and help them grow in faith and their understanding of what the church teaches.

NEXT: Pakistani bishop: ‘We don’t have resources’ to deal with inflation