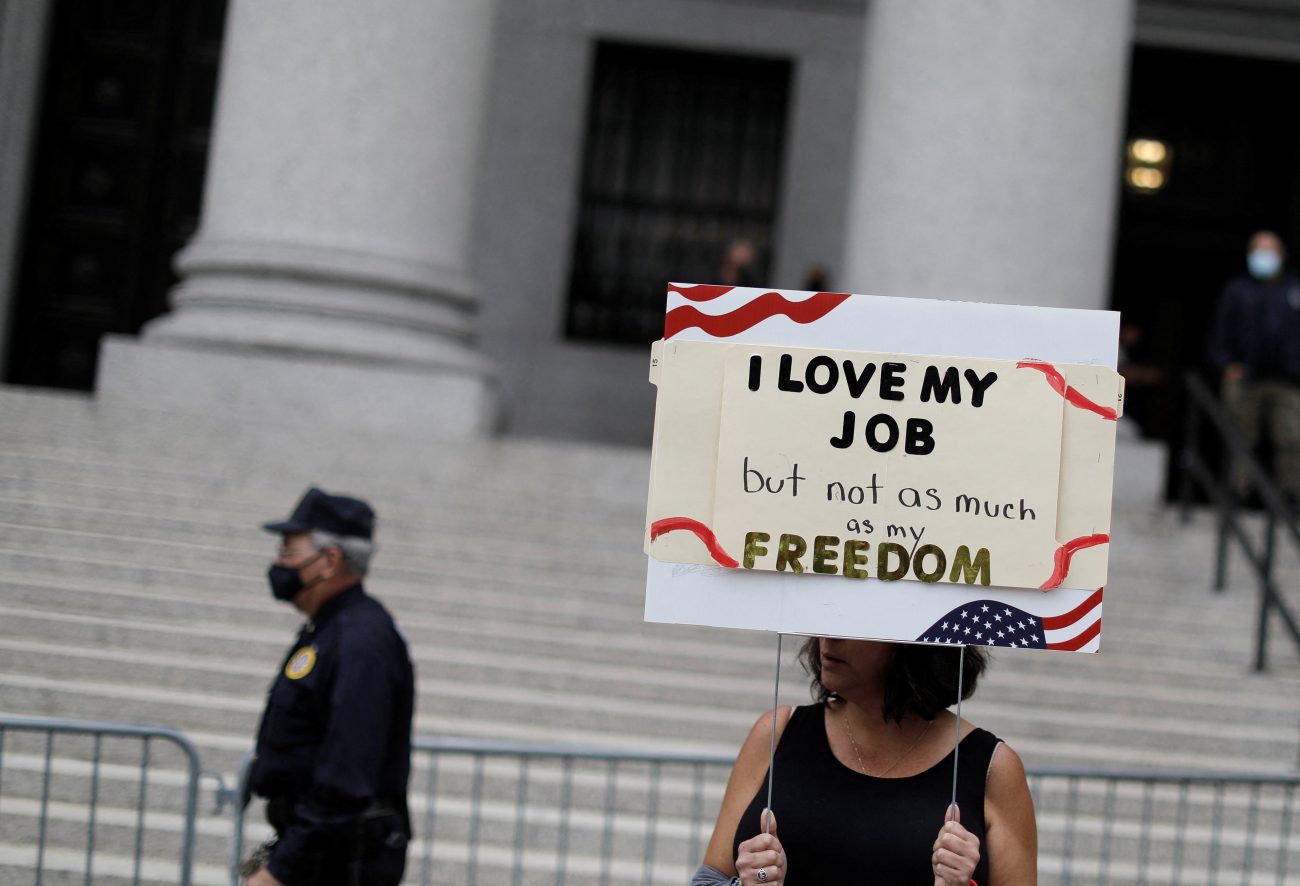 A woman in New York City holds a sign Oct. 12, 2021, during a protest over the city's COVID-19 vaccine mandate. The Supreme Court upheld New York's mandate June 30, 2022, by declining to hear a challenge from health care workers who objected to the mandate not including a religious exemption. (CNS photo/Mike Segar, Reuters)

By denying the appeal, the justices left a lower court ruling in place that rejected the health care workers’ claim that the COVID-19 vaccine mandate violates a constitutional prohibition against religious discrimination.

The justices did not explain why they chose not to take up this case, but the dissenters, Justices Clarence Thomas, Samuel Alito and Neil Gorsuch, did.

Thomas also said that by taking this case, the court could “give much-needed guidance.”

The order was issued on the last day of the court’s term. The high court also sent some cases back to lower courts due to its recent rulings on abortion and gun rights.

The state’s mandate was first imposed last August and had allowed exceptions for medical reasons or religious objections, but the religious exemption was later removed.

Initial lawsuits filed by New York nurses, doctors and other health care workers said their religious reasons for not wanting the COVID-19 vaccinations were due to a link to cells from aborted fetuses that were used in the development or testing of the vaccines.

One group challenging the mandate said it “imposes an unconscionable choice on New York health care workers: abandon their faith or lose their careers and their best means to provide for their families.”

In response, the state’s brief said the vaccines do not contain aborted fetal cells but that an abortion-derived cell line was used during the research and development of Pfizer and Moderna vaccines.

It added that the “use of fetal cell lines for testing is common, including for the rubella vaccination, which New York’s health care workers are already required to take.”

The state’s lawyers also pointed out that Pope Francis and other Catholic leaders have approved of the COVID-19 vaccines being administered and the U.S. Conference of Catholic Bishops called the connection between the vaccines and abortion “very remote.”

A report by New York state estimates that about 4% of its health care work force — or 37,000 workers — have left their jobs over the vaccine mandate.

The Supreme Court has turned away other challenges seeking emergency relief from COVID-19 vaccine mandates including a challenge by students from Indiana University and from public school employees in New York City. Both of these mandates had religious exemptions.

Last summer, Mercy Sister Mary Haddad, president and CEO of the Catholic Health Association, issued a statement encouraging all health care workers to get vaccinated, saying they would be doing their part to “protect themselves, their co-workers, their patients, their loved ones and their neighbors.”

She also said the association, which supports more than 2,200 Catholic hospitals, health care systems, nursing homes and long-term care facilities across the country, “strongly supports member health systems as they take necessary steps toward ensuring as many health care workers as possible receive the vaccines.”

PREVIOUS: Pray for migrants who died in truck, archbishop says