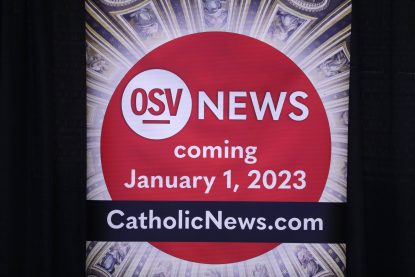 Pictured is the logo for OSV News, a new Catholic news service being launched in January by Our Sunday Visitor, an Indiana-based Catholic publishing company. Scott P. Richert, publisher of OSV, announced the launch July 6, 2022, during the Catholic Media Conference in Portland, Ore. (CNS photo/Bob Roller)

PORTLAND, Ore. (CNS) — Scott Richert, publisher of Our Sunday Visitor, said July 6 the Indiana-based Catholic publishing company would fill the void left behind by the closure of the domestic operations of Catholic News Service in January 2023 with OSV News.

He made the announcement at the Catholic Media Conference in Portland and described the new venture as a new Catholic news service.

“The best is yet to come,” he told the group of Catholic journalists and communication leaders in a brief announcement prior to the afternoon’s keynote address during the July 4-7 annual conference of the Catholic Media Association.

Richert said that after the U.S. Conference of Catholic Bishops announced the CNS closure May 4, effective at the end of the year, he and his colleagues have been asking “not should OSV do something, but what should OSV do.”

“OSV News is the answer,” he said, adding that it would be a “new renaissance” in Catholic media.

Our Sunday Visitor, founded in 1912 in Huntington, Indiana, produces a weekly print newspaper, periodicals, books, parish resources and church envelopes for parishioners’ church contributions. The newspaper and its online site frequently publish CNS content as a client of the news service.

An OSV news release about its new venture said the company began talks with the USCCB after the announcement of CNS’s closure and “reached an agreement to acquire rights to the platform that CNS uses to produce and distribute its content,” which will be on the same domain: Catholicnews.com.

Richert told the Portland group, which included several editors of CNS client subscribers from diocesan newspapers and national publications such as America magazine and National Catholic Reporter, that if they sign up for OSV News before the end of the year will have a “seamless experience” since it will launch the day after CNS closes.

He also announced that OSV will be acquiring all of the digital archives owned by CNS, along with rights to existing and future content from CNS Rome, which will remain open and will operate independently from OSV. The Rome bureau of CNS will  provide content at no charge starting next year, the USCCB announced in May. 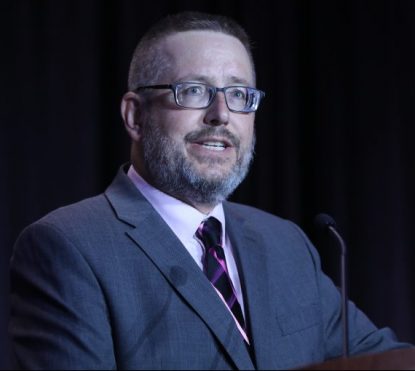 “The digital archives of CNS are of great importance, both historically and as background for Catholic journalists working today,” Richert said.

The news release said there would be a “rebranding and a redesign of CatholicNews.com” but that the “tools that subscribers to CNS currently use will remain the same.”

It said it will provide national and international news, analysis, editorials, commentary and features and also would partner with the Vatican’s Dicastery for Communication and with Aleteia, a Catholic website.

Without giving details, the release said it would “collaborate closely with an extensive network of Catholic diocesan publications to syndicate their content through OSV News” and said that subscription pricing would be announced in September.

Richert told National Catholic Reporter that OSV wants to hire about 10 new employees and some freelancers who would work remotely from a variety of locations. He also said the service plans to provide content in Spanish.

It pointed out that the announcement of the closure of CNS’s domestic operations “felt like the final nail in the coffin of dozens of diocesan publications, and perhaps some national ones as well.”

“We could not let that happen. For our own publication, with a few strategic hires and a slight change in content, Our Sunday Visitor likely could have survived in a post-CNS world. But there is more to the Catholic press than one publication,” said the editorial, written by the OSV’s editorial board.

It stressed that OSV News would not just be the publishing company’s latest “product offering” but would be a “concrete symbol of our commitment to collaborate with our fellow members of the Catholic press to bring about a new renaissance in Catholic media — and a brighter future for the Catholic Church in the United States and beyond.”

The morning after Richert’s announcement, the CMA held a previously scheduled “CNS roundtable discussion” to discuss challenges and concerns for U.S. Catholic publications with the closing of CNS, led by members of an ad hoc committee formed by the association in the wake of the announcement that CNS domestic operations would cease at year’s end.

At the roundtable, the ad hoc committee members noted the session was planned prior to the OSV announcement and they wanted to listen to CMA members’ comments and suggestions on going forward without the CNS domestic operation.

Some questions were addressed directly to Richert, who said OSV News would begin posting job openings this summer and expects to fill positions by September. He also said the news service will not have direct affiliation with the USCCB other than the earlier negotiations over rights and access to CNS content and that he looked forward to having continuing discussions with members of the Catholic Media Association.

Regarding potential political coverage, he said OSV News would be covering all news important to the Catholic Church, noting that Washington politics would certainly fall under that category.

The group’s discussion also focused on how the loss of CNS impacts all of Catholic media and a frustration over what seemed to be the lack of consultation and synodality from the U.S. bishops about the CNS closure.

Some unanswered questions included how the bishops will see the importance of Catholic communication going forward and if there will be other potential broader Catholic news service outlets.

In a Catholic Media Association membership meeting that followed the roundtable discussion, the future of Catholic journalism was once again at the table.

Peter Jesserer Smith, a staff reporter for the National Catholic Register, said the closures this year of CNS and Catholic New York, newspaper of the Archdiocese of New York, should serve as a “big wake-up call” for members of the Catholic media to look at the opportunities before them and with U.S. bishops to consider “how to stop this trend.”

NEXT: Sister Campbell, Trumka, 15 others receive Presidential Medal of Freedom