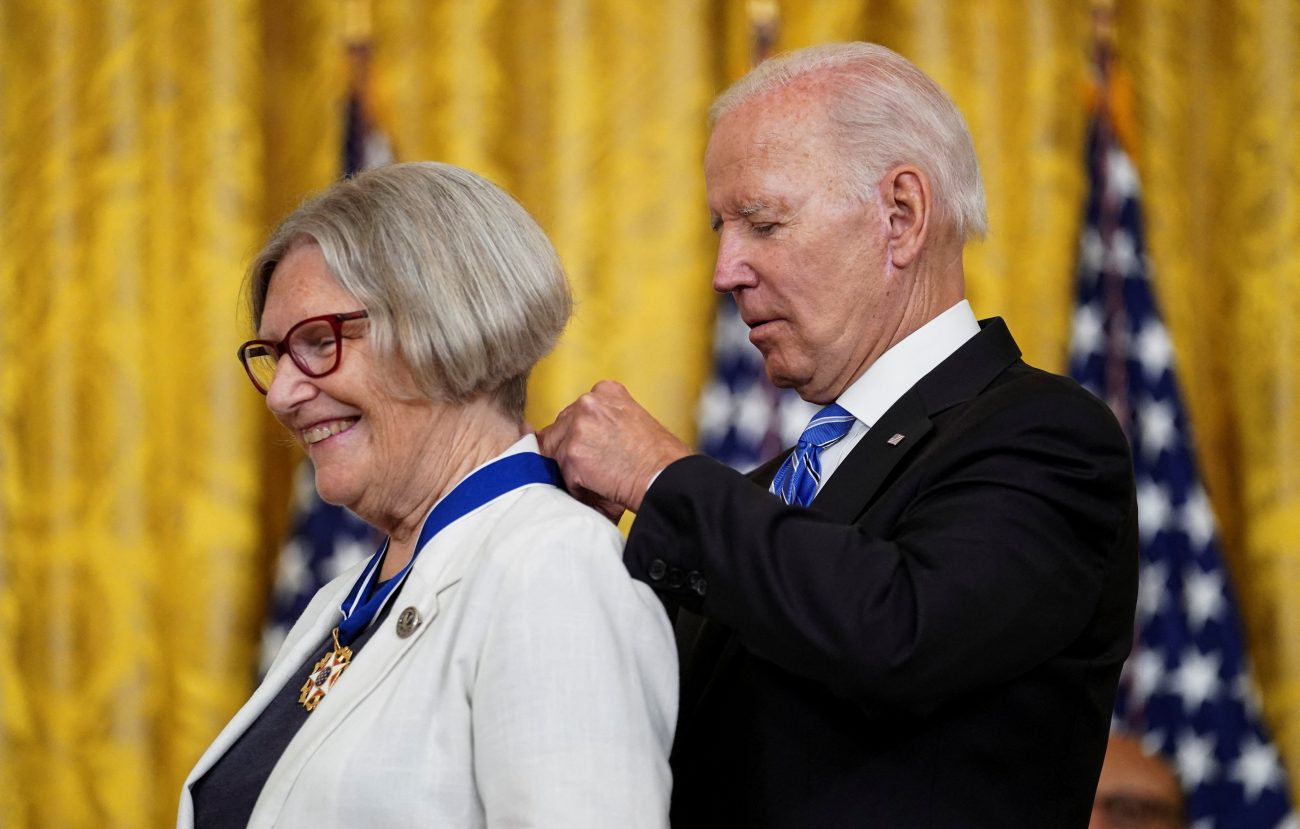 President Joe Biden awards the Presidential Medal of Freedom to Sister Simone Campbell, a longtime advocate for economic justice and health care policy, during a ceremony at the White House in Washington July 7, 2022. Sister Campbell, a California native and a member of the Sisters of Social Service, retired in March 2021 as executive director of Network, a Catholic social justice lobbying organization, after serving for 17 years in the position. (CNS photo/Kevin Lamarque, Reuters)

President Joe Biden presented the award to 15 others as well July 7.

“For so many people and for the nation, Sister Simone Campbell is a gift from God. For the past 50 years she has embodied the belief in our church that faith without works is dead,” Biden said of the woman religious whose career has focused on advocating for poor and voiceless people.

Sister Campbell, a California native and a member of the Sisters of Social Service, stepped down as executive director of Network, a Catholic social justice lobbying organization, in March 2021 after serving for 17 years.

Biden particularly noted her role in passage of the Affordable Care Act in 2010, a complex law which expanded access to health care for millions of people. He also cited a series of annual “Nuns on the Bus” nationwide tours that Sister Campbell led touting health care as a right and that federal budgets were moral documents that must reflect the priorities of serving poor and marginalized people.

“Compassionate and brave, humble and strong, today Sister Simone remains a beacon of light. She’s the embodiment of a covenant of trust, hope and progress of a nation,” Biden said. 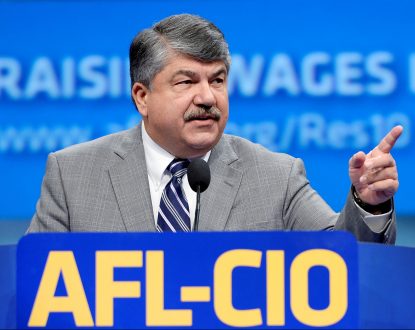 Longtime AFL-CIO President Richard Trumka is seen in a Sept. 10, 2013, photo. President Joe Biden named the late Trumka as one of 17 recipients of the Presidential Medal of Freedom July 1, 2022. Trumka, a Catholic, died Aug. 5, 2021. The posthumous honor for him was being presented during a July 7 White House ceremony for recipients. (CNS photo/Kevork Djansezian, Reuters)

Trumka was president of the AFL-CIO from 2009 until his death in August 2021. The faith of Trumka, a Catholic born to a Polish father and an Italian mother, helped shape a lifelong career in the labor movement.

He led the 12.5-million-member AFL-CIO through more than a decade of difficulties, as the percentage of U.S. workers represented by unions continued a slow but steady erosion. Those who were in unions frequently faced unresponsive employers — and workers who organized for union representation faced hostility and threats of firing and job loss.

“No one did more work for American workers than he did,” Biden said of Trumka. “His work was synonymous with the word that defined his life: dignity, dignity that comes with a good-paying job that builds a good and decent middle-class life.”

Calling Trumka’s advocacy for workers as “fierce,” Biden said that his friend of 30 years constantly tried “to do what was right for working people” by fighting for fair wages and protecting their pensions.

Sister Campbell said she was shocked to hear from Biden June 22 when he called her to ask her to accept the honor.

“I told him you bring tears to my eyes. I’m just stunned,'” she told Catholic News Service prior to the ceremony.

The church “also taught me that we have to help others,” he said. “In this position I have more of an opportunity to help people get ahead and get a fair shake, to get a job, to get fair treatment, than I would have anywhere else. And that’s exciting.”

Others who received the Medal of Freedom included gymnast Simon Biles, who has received a combined 32 Olympic and World Championship medals and is a well-known advocate for athletes’ mental health and safety, children in foster care and victims of sexual assault; Gabrielle Giffords, a former member of Congress and gun violence prevention advocate; attorney Fred Gray, one of the first Black members of the Alabama Legislature; Sen. John McCain, a Purple Heart award recipient and 2008 Republican presidential nominee, who died in 2018; Sen. Alan Simpson of Wyoming, an advocate for campaign finance reform, responsible governance and marriage equality; Brig. Gen. Wilma Vaught, one of the most decorated women in the history of the U.S. military; and actor Denzel Washington.

The award recognizes people who have made an especially commendable contribution to the national interests of the U.S., world peace, or cultural or other endeavors.