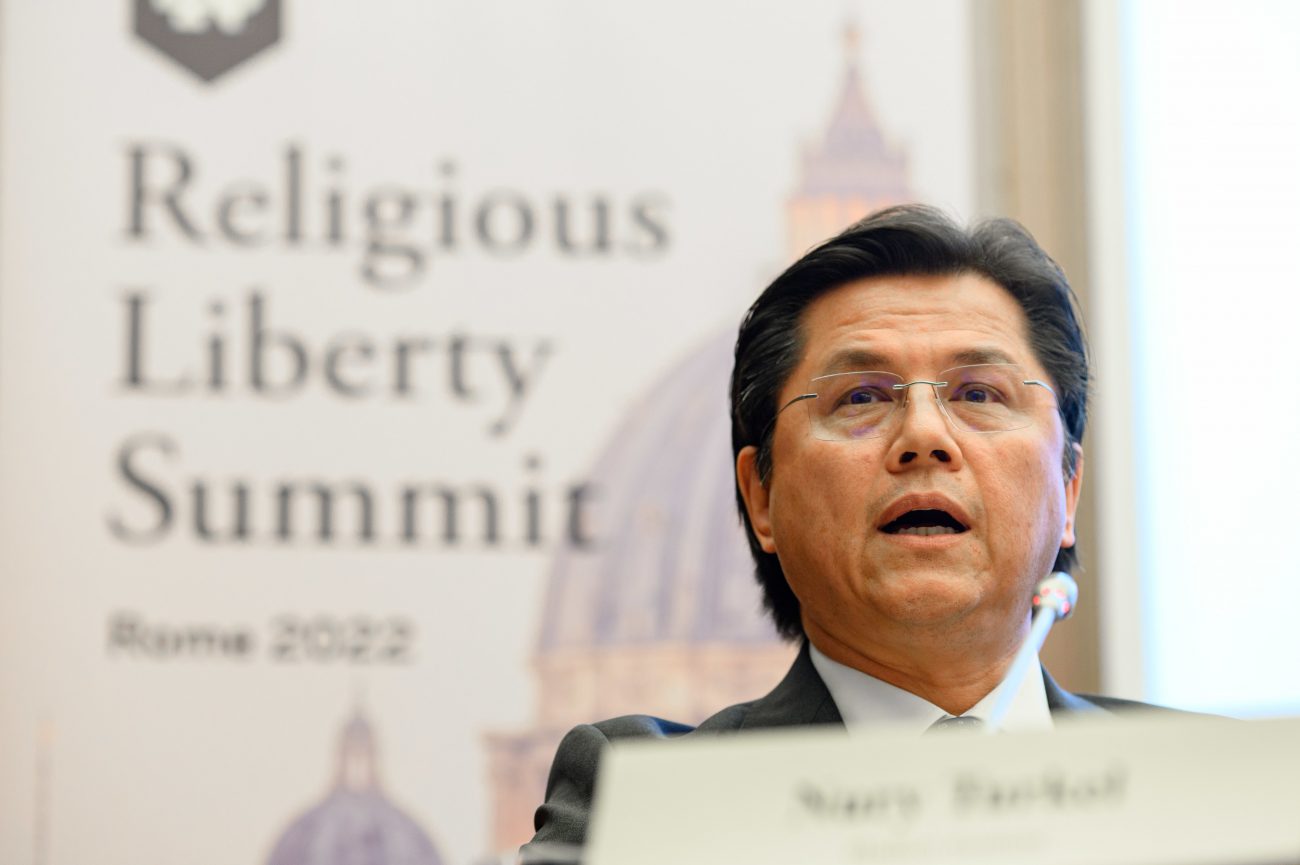 ROME (CNS) — Violations of religious liberty are increasing around the world, and U.S. citizens have a special responsibility to stand up for the religious freedom of all believers in all nations, said Samah Norquist, former chief adviser for international religious freedom to the administrator of U.S. Agency for International Development.

Threats to religious freedom are “affecting nearly all religious groups,” Norquist told an audience in Rome July 20. Fighting restrictions and defending the right to believe in and practice a faith is a particular responsibility for U.S. citizens because “religious freedom is America’s first freedom. America’s story started with communities of faith who escaped religious persecution.”

G. Marcus Cole, dean of the law school, told participants that the Second Vatican Council’s Declaration on Religious Freedom, “Dignitatis Humanae,” was approved by a large majority of bishops at the council, but it was still controversial.

“The Catholic Church had a history of using its elevated political status and power within Christendom to suppress nonconformity,” he said. “‘Dignitatis Humanae’ represented, to some, a revolutionary shift in its approach to religious freedom.”

But, Cole said, whether one sees it as a shift or simply a “clarification of church doctrine, the protection and defense of religious freedom is now central to Catholic faith.”

The dean said that as a Catholic, he sees religious freedom as “an essential extension” of Jesus’ call to “go and make disciples of all nations,” because that freedom “is a necessary pre-condition for anyone to choose a faith, including mine.”

The Vatican II document taught that religious liberty is a right found in the dignity of each person and that no one should be forced to act in a way contrary to his or her own beliefs.

After churches and other religious groups suffered excessive restrictions during the height of the COVID-19 pandemic, Cole said, significant victories for religious freedom have been won in the past year, including U.S. Supreme Court decisions permitting a Christian flag to fly at Boston’s City Hall; allowing Maine tuition aid funds to go to religious schools; and upholding the right of a public school football coach to pray on the field after a game.

But, he said, “there is much more to be done” to end “assaults on religious freedom” in the U.S. and around the world.

Cole and other conference participants repeatedly mentioned China’s repression of predominately Muslim Uyghurs, some 1 million of whom have been detained in internment camps.

Nury Turkel, chairman of the U.S. Commission on International Religious Freedom and a Uyghur American, focused his remarks not only on “China’s ongoing genocide” of its Uyghur population, but on the repression of anything the Chinese government considers a “foreign religion,” including Catholicism.

The commission, he said, has been concerned about Chinese government’s “attacks on the Catholic community in mainland China and Hong Kong,” including the detention of prominent Catholics, raids on churches, pulling down crosses from steeples and confiscating religious materials.

Turkel said the Chinese Communist Party is resorting more and more to “forced labor” and “enslavement” to punish religious believers to force them to give up their faith, and that it is relying more and more on the cooperation of technology companies to increase surveillance on all citizens, including monitoring of their religious activities.

Farahnaz Ispahani, a public policy scholar at the Washington-based Wilson Center and a former member of Pakistan’s Parliament, told participants that “religious freedom issues have worsened throughout the Middle East, China and North Korea for some time, but now violence against religious minorities is a recurrent phenomenon in parts of Africa, such as Nigeria.

“Even in Europe and the United States, there is a rise of intolerance toward religious minorities. One of the ways you can see it is a rise in attacks of antisemitism, the rise in attacks on Muslims and there have been gun attacks on Christian churches, as well. That is troubling,” she said.

“The victims of a lack of religious freedom do not belong to one faith,” she said. “Sadly, the faith tradition whose followers in one country are the violators of the right of the minority from another religion ends up being the victim of discrimination and persecution” in another country.