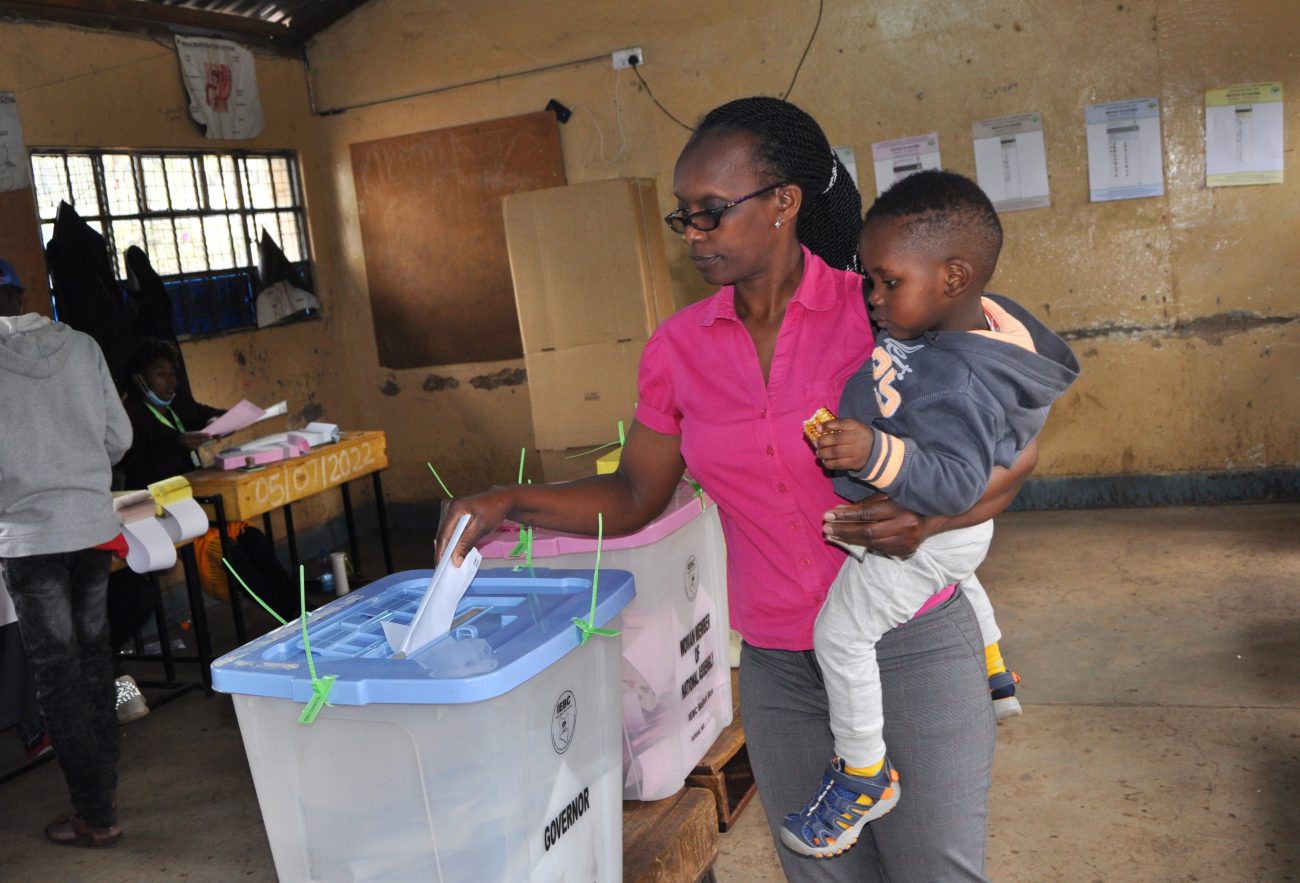 An unidentified woman with a child casts a ballot in Kenya's general elections, in Nairobi, Kenya, Aug. 9, 2022. Kenya's Catholic bishops have called for peace after a dispute emerged in the presidential election. (CNS photo/Fredrick Nzwili)

NAIROBI, Kenya (CNS) — Amid a persistent call for calm by the country’s Catholic bishops, Kenya is remaining largely peaceful even as one of the main contenders for the presidency rejected the election results.

William Ruto, Kenya’s current deputy president, was declared president-elect Aug. 15 after anxious and tense moments while votes were counted. The 55-year-old political leader, a onetime chicken trader, was elected in Aug. 9 polls that observers described as calm and peaceful.

But Aug. 16 his main challenger, Raila Odinga, an engineer, rejected the results.

“We have commenced the process of reaching out to the key political actors. … It is our hope and prayers that these engagements will promote justice, peace and prosperity,” Archbishop Martin Kivuva Musonde of Mombasa said Aug. 17 during a news conference called by religious leaders.

For many Kenyans, history appeared to repeat itself. While citizens have long voted peacefully, losing candidates for the presidency have repeatedly rejected the outcome as either rigged or marred by irregularities, triggering postelection violence and mass protests.

“I think Kenyans are getting used to this pattern. In the future, they will not care to vote. Voter apathy is on the rise,” said Father Joachim Omollo Ouko, an Apostle of Jesus priest in the western Archdiocese of Kisumu.

While the bishops have been deeply concerned about the potential for postelection violence, this year they are confident that calm will continue.

“We are not anticipating a repeat of the violence, but we have to keep urging the people to remain calm. Any small wrong action can act as a trigger. We had a very peaceful and calm voting process. We must maintain that,” Bishop Joseph Mwongela of Kitui told Catholic News Service.

“We are telling those who are disputing the outcome to follow the legal process. No one should take the law in their hands,” he said.

“We must live together as Kenyans. The international community is watching,” the bishop added.

In the postelection violence pattern, scores were killed when the incumbent President Uhuru Kenyatta was declared the winner of the 2017 vote. The Supreme Court of Kenya later nullified the result.

The most deadly postelection violence occurred between December 2007 and February 2008 when an estimated 1,200 people died in two months of ethnic fighting. The violence ignited after the late Emilio Kibaki was declared the winner and Odinga rejected the outcome as rigged.

“2022 was quite different. It appears the people are more enlightened and things went well. I can say it was a good election. I attribute this partly to prayers and peace messaging of the religious leaders,” said Father Nicholas Makau, a Consolata Missionary priest.

Odinga said challenged the final tally, describing it as “null and void” and must be quashed by a court of law.

“In our view, there is neither a legally and validly declared winner nor a president-elect,” Odinga told a news conference while urging Kenyans to remain peaceful as he sought justice through legal means.

However, Father Makau said Kenyans, after voting in what they consider an open and transparent manner, were open to hearing any evidence of wrongdoing that may be presented.

“Every Kenyan is keen to hear his evidence. They are waiting anxiously,” he said.

Meanwhile, Ruto has promised to serve all Kenyans in spite of how they voted. He also has said he will not seek revenge.

NEXT: In note to nuns, pope says he is doing everything he can for Ukraine