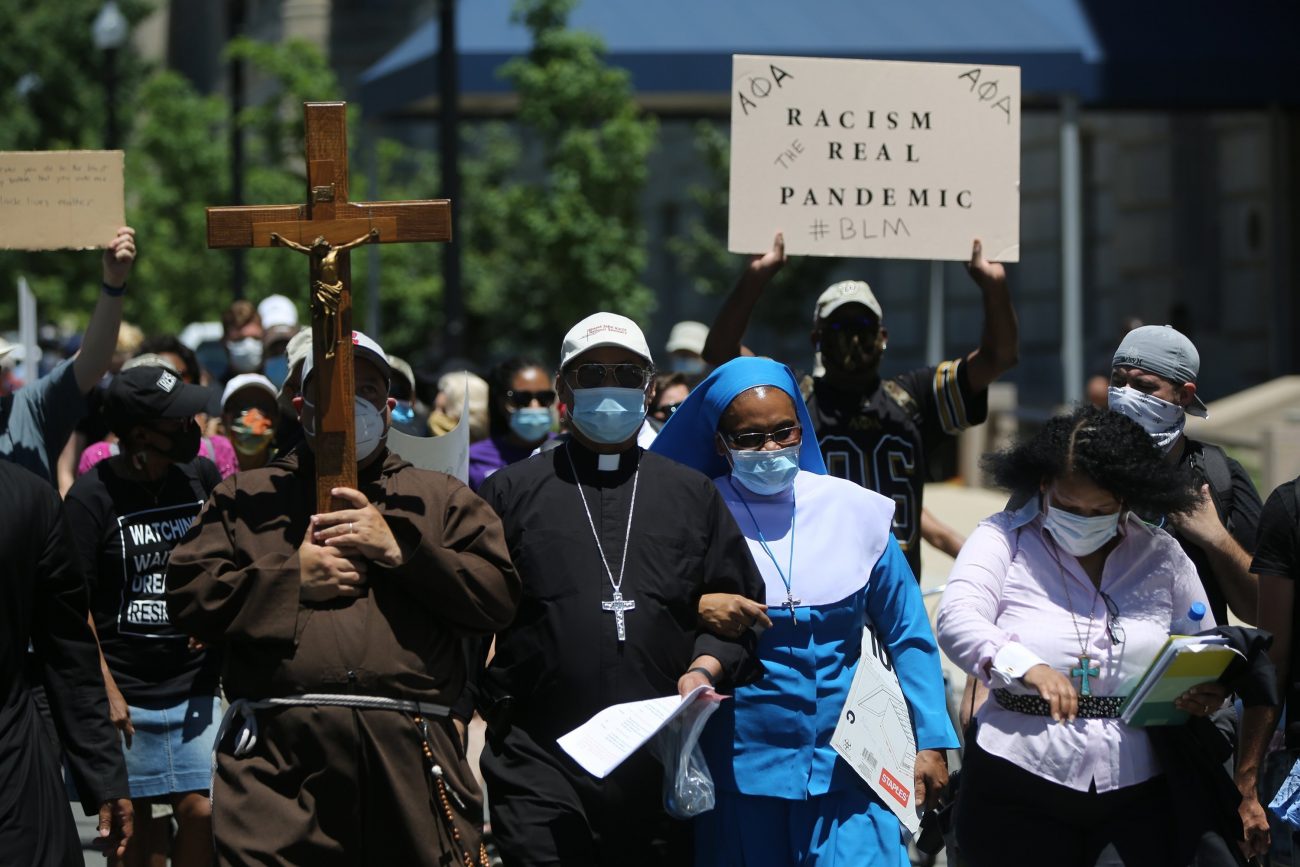 Washington Auxiliary Bishop Roy E. Campbell and a woman religious walk with others toward the National Museum of African American History and Culture in Washington during an anti-racism protest June 8, 2020. (CNS photo/Bob Roller)

WASHINGTON (CNS) — When Georgetown University and the Jesuits began efforts to make amends for selling 272 enslaved people to a Louisiana plantation in the 1830s, leaders of the Catholic institution for higher education went beyond their apologies and offers of restitution.

Georgetown officials launched the Georgetown Slavery Archive in 2016 and put it online so that people will have access to it, because they thought it was important to help people understand the past as a way of securing the future.

“Whatever you think society should do today to deal with the legacies of slavery and other forms of racism, it has to be grounded in a sincere understanding of the history,” said Adam Rothman, a Georgetown history professor and the principal curator of the slavery archive.

The harmful effects racism has had on American society and how embedded racism is within both U.S. government systems and churches has been a concern of Pope Francis and many U.S. bishops.

It’s a difficult topic for many Americans to approach or even acknowledge and in the current U.S. political climate there has been push back on educational programs that teach about the horrors of slavery, continued forced servitude among men and women of color following the Civil War and into the 20th century and continued societal racism.

(Listen to a related podcast on “The Church and Race”)

Some Republican politicians have expressed concern that this approach to history in schools will convince white people they are fundamentally racist and should feel guilty about the advantages their race affords them.

Several states in the U.S. have pushed laws or other measures to restrict how race and racism can be taught in schools, a move that concerns teachers’ unions and educators that such limits will downplay the role past injustices still has on society today.

Cardinal Wilton D. Gregory of Washington — the only black Cardinal in the U.S. — told CNS he doesn’t believe American society will ever be able to resolve its racial struggles if schools limit how they present history.

Rothman pointed out that textbooks from the mid-20th century didn’t adequately deal with the horrific details of slavery, acknowledge that states that seceded from the union during the Civil War listed the institution of slavery as a reason for doing so, or educate about continued oppression and racial violence throughout the 20th century.

(Watch a Catholic News Service video on the history of slavery and current racial unrest.)

Joseph Geeter, a Black parishioner of St. Barbara Catholic Church in Philadelphia, doesn’t believe it’s a coincidence that there is controversy on how U.S. racial history is taught in the classroom following the 2020 killing of George Floyd by a white Minnesota police officer, an event that sparked racial justice protests across the country.

Geeter said he still experiences the effects of bigotry in the workplace, the church and society and agrees that history can help skeptics of existing systemic racism see beyond a narrative that has romanticized darker chapters of the past.

Dealing with the unabridged version of the past is key in moving toward racial healing and equality, said Joe Ferrara, vice president of Georgetown University and chief of staff to the university’s president.

When Georgetown joined a coalition of colleges called “Universities Studying Slavery” in 2015, it was a small group of mostly Virginia schools, but it had grown to 80 institutions of higher education by 2022, Ferrara said.

“More people are trying to engage in this history,” he said, “and that’s a good thing.”