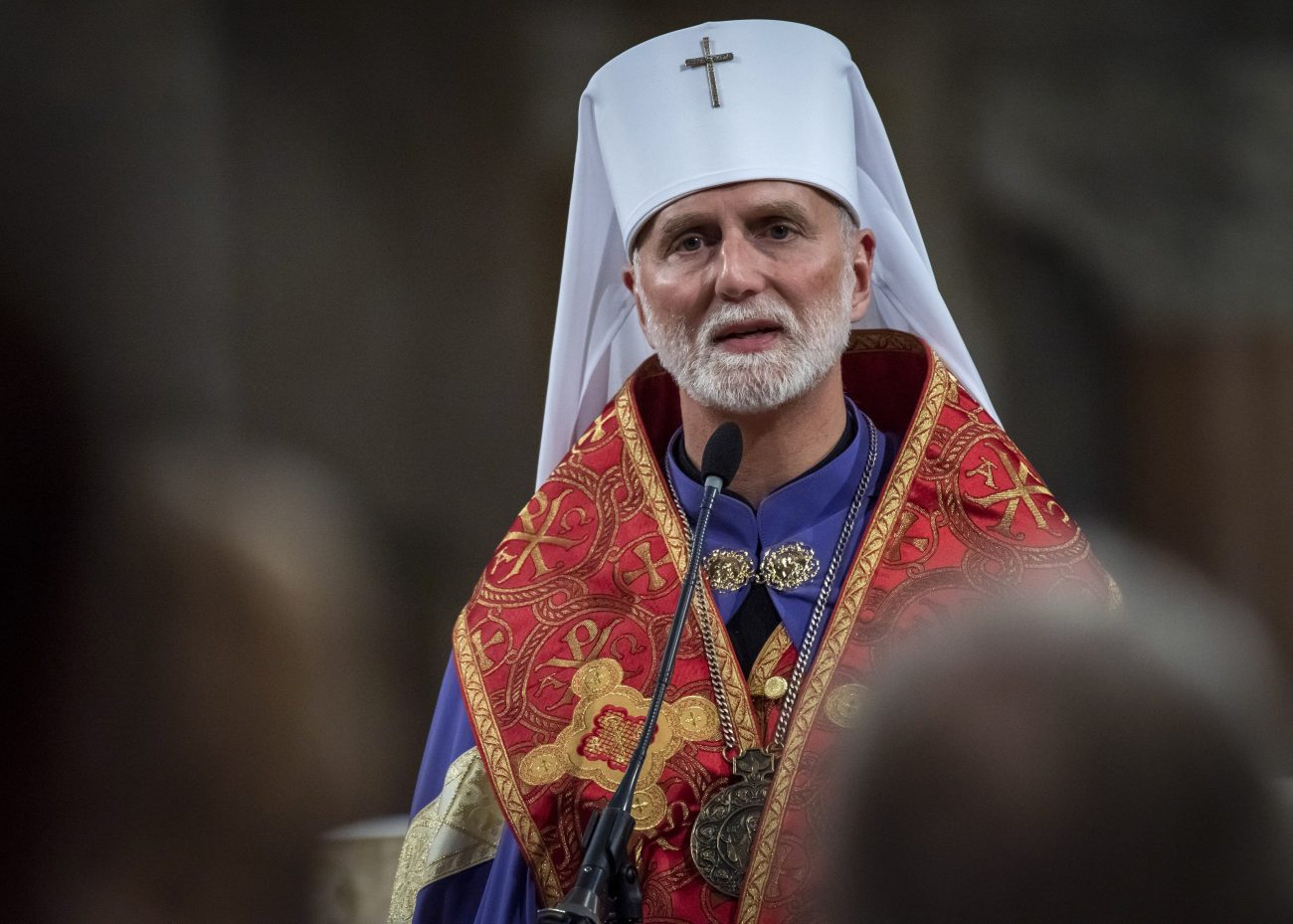 Archbishop Borys Gudziak of the Ukrainian Catholic Archeparchy of Philadelphia speaks during an ecumenical prayer service in the Crypt Church of the Basilica of the National Shrine of the Immaculate Conception in Washington Sept. 21, 2022. He encouraged people to pray for peace in Ukraine, and to pray for the victims of the war there. "Your prayer will save lives. Your prayer will heal wounds. Your prayer will strengthen Gods kingdom on earth," he said. (CNS photo/Matthew Barrick, Catholic Standard)

WASHINGTON (CNS) — Cardinal Wilton D. Gregory of Washington joined Archbishop Borys Gudziak of the Ukrainian Catholic Archeparchy of Philadelphia Sept. 21 for an ecumenical prayer service to remember those who have been killed in Russia’s invasion of Ukraine and to renew calls for peace for that war-ravaged nation.

Archbishop Gudziak prayed that God would “in blessed repose grant (the victims of the war) eternal rest” and “render their memory eternal.”

He also prayed God would “place the souls of his servants, the victims of the war in Ukraine, which have departed from us, in the abode of the just, and give them rest in the bosom of Abraham, and number them among the just.”

The prayers were offered during the Panakhyda (service for deceased) that was held in the Crypt Church at the Basilica of the National Shrine of the Immaculate Conception in Washington.

The service also marked 200 days since the start of renewed hostilities by Russia against Ukraine.

“We join in this evening according to the prayer of the Byzantine Ukrainian tradition to show our solidarity in the one body of Christ,” Cardinal Gregory said. “We pray for those defending their homeland so that they may be strengthened to live in the fullness of God’s love.”

Cardinal Gregory and Archbishop Gudziak were joined by Archbishop Timothy P. Broglio of the U.S. Archdiocese for the Military Services, Washington Auxiliary Bishop Mario E. Dorsonville, who is the U.S. bishops’ migration committee chairman, representatives of the Ecumenical Patriarchate of Constantinople and the Melkite Catholic Church.

The mostly sung prayer service drew a congregation of slightly more than 100 people — some in traditional Ukrainian dress.

“Tonight, as we gather to remember the senseless suffering of the Ukrainian people, we turn to our God, our only help,” Cardinal Gregory said. “Tonight, we pray in solidarity with the people of Ukraine.

“Tonight, we remember our freedom, we remember the love of Jesus Christ for the entire world as we gather before the cross. The cross of Our Lord represents the greatest manifestation of love.”

“These staggering statistics tell the tale of a horrible tragedy,” Cardinal Gregory said at the prayer service. “Yet amid this dreadful tragedy, we have seen some of the most charitable acts. It brought out the best in so many people throughout the world as they opened their home and hearts to refugees.”

Both Cardinal Gregory and Archbishop Gudziak lamented reports of war crimes and other atrocities being committed against the people of Ukraine by Russian soldiers.

Recently a mass grave in the northeastern Ukrainian city of Izium was discovered and believed to contain the remains of about 500 people. Ukrainian President Volodymyr Zelenskyy, in a video message, said investigators saw evidence that some of the victims had been tortured.

In addition, in areas recaptured by Ukrainian forces, the U.N.’s human rights monitors have found evidence of torture, mutilation, rape, looting and the deliberate killings of civilians by Russian troops as well as churches, houses, hospitals, schools and other buildings being targeted.

“Today our Ukrainian sisters and brothers face unspeakable tragedies,” Cardinal Gregory said. “These war crimes call out to God as countless people mourn their dead. We must remember these people.”

“We remember and name these atrocities to remember what is not authentically human, to remember these sufferings are not from God,” he added.

Archbishop Gudziak asked for prayers for “those who were tortured and executed.” He also reminded the faithful to pray for “those who are in constant pain” and for “all those killed and for their eternal repose.”

The current hostilities have caused Europe’s largest refugee crisis since World War II, as approximately 7.3 million Ukrainians have fled the country and another third of the population is displaced from their homes. The war also has been blamed for a worsening global food insecurity crisis.

“Many nations of the world have opened their countries and their homes (to Ukrainian refugees),” Cardinal Gregory said. “This is a wonderful example of humanity, but we cannot say we are doing enough until there is peace in Ukraine.”

The evening prayer service came on a day when war rhetoric dominated the news.

Russian President Vladimir Putin renewed his nuclear threats, and U.S. President Joe Biden, in an address to the U.N., criticized Russia for shunning its nuclear nonproliferation agreements and for “extinguishing Ukraine’s right to exist as a state.”

Archbishop Gudziak conceded there is a lot to worry about, but “fear is something the devil wants to instill,” he added.

“We have to trust we are in the hands of the Lord. If we pray, if we trust in the Lord, if we look at the example of the martyrs, then we will find what we are looking for,” he said.

At the end of the prayer service, Archbishop Gudziak noted that he has been to Ukraine four times in the past four months “and I have seen the people of Ukraine are standing up for justice (and) risking their lives.”

“Everyone I have met (in Ukraine) — they thank you for your support. They thank you for you being informed and standing up for the truth,” he said. “They thank people of goodwill for their humanitarian aid. Everywhere I went, Ukrainians were thanking Americans and American Catholics.”

By his own estimate, he said, American Catholics have contributed about $100 million in humanitarian aid to the suffering people of Ukraine.

“The generosity of Catholic people in the United States should not be underestimated,” Cardinal Gregory remarked. “The people of Ukraine need all the help we can provide them, and we must insist peace return to people from whom peace was taken.”

Archbishop Gudziak said he was heartened by that fact that “there has been a thundering chorus of support from the United Nations” and that the church “has participated in the efforts of freedom and liberation.”

But he also has been saddened by “the daily stream of funerals to the cemeteries.”

“Seeing so many funerals and so many grieving families is so painful,” Archbishop Gudziak said. “However, I have not heard one Ukrainian say, ‘We have to give up.'”

Archbishop Gudziak said that those who wish to help should send donations to Catholic Relief Services, Catholic Charities USA, the Knights of Columbus and many other Catholic agencies that are collecting money.

Donating money is the best way to help the people of Ukraine, he noted, because many needed items can be purchased in Ukraine, which in turn supports the local economy.

“Please continue to pray,” he said. “There is nothing more powerful.”

NEXT: Hurricane Ian leaves catastrophe in Florida, millions without power