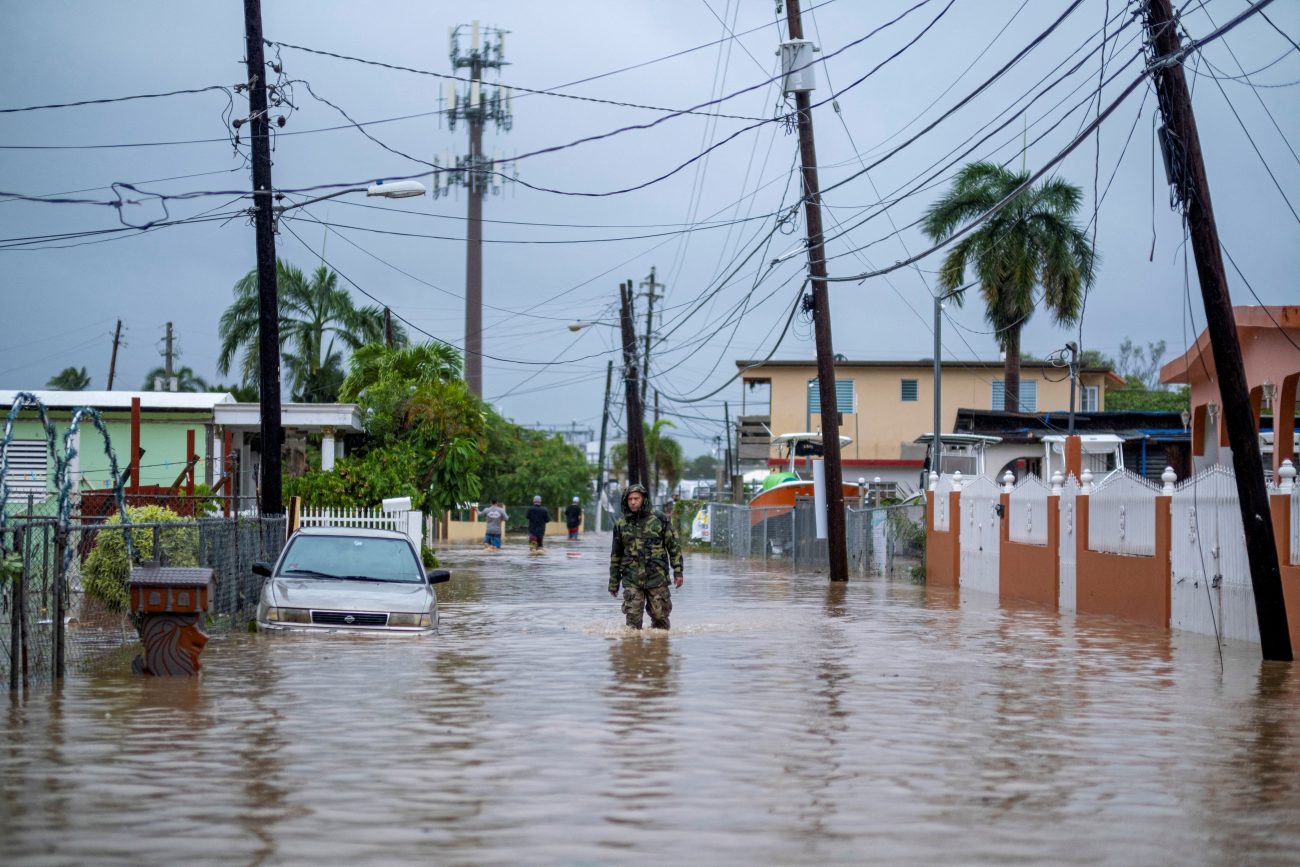 A member of the Puerto Rico National Guard wades through water Sept. 19, 2022, in search for people to be rescued from flooded streets in the aftermath of Hurricane Fiona in Salinas, Puerto Rico. (CNS photo/Ricardo Arduengo)

WASHINGTON (CNS) — It’s too early to tell the extent of the damage in the Catholic dioceses of Venice and St. Petersburg in Florida following a direct hit Sept. 28 by Hurricane Ian, one of the most powerful hurricanes the state has seen.

However, organizations such as Catholic Charities USA said they have their response teams in place to deal with the aftermath of the massive Category 4 storm that lashed western and central Florida with winds of more than 155 mph Sept. 28 and 29.

Even in a state used to powerful storms, Ian’s destruction managed to shock, leaving mementos of its might in the form of cars battered by winds and water, left floating in flooded city streets next to uprooted trees and parts of roofs torn from buildings in the cities of Fort Myers, Tampa and Punta Gorda.

Dioceses that include those areas closed their churches, schools and other gathering centers. The Diocese of Venice posted a video of the Servant Sisters of the Virgin of Matara Sept. 28 as volunteers helped board up windows at St. Michael Church in Wauchula in the northern part of the diocese.

There were no updates on social media or on the websites of those dioceses early Sept. 29.

Bishop Gregory L. Parkes of St. Petersburg, which includes Tampa, and Bishop Frank J. Dewane of Venice had asked for prayers, knowing their diocesan territories were in the crosshairs of the storm.

Some other U.S. bishops kept an eye on the hurricane and offered solidarity with the people of Florida.

“We pray for all people in Florida, especially for people’s lives affected,” wrote Archbishop Gustavo García-Siller of San Antonio on Twitter just before the hurricane made landfall. “May you, Lord, be their strength! We do not control everything.”

More than 2.5 million were left without electricity as the hurricane, downgraded to a tropical storm early Sept. 29, headed north toward Georgia, North Carolina and South Carolina. Family members desperately posted on Twitter asking for updates on conditions in places such as Venice, close to where the storm made landfall and where many remain without communication.

Authorities began to survey the damage early Sept. 29, looking for those who had not managed to leave before the hurricane hit, but so far no fatalities were reported. They asked those who stayed in their homes to remain indoors as officials were conducting water rescues but still struggling to make their way amid debris and remaining flooding and wind.

Catholic Charities USA said in a statement that its disaster response teams “have a long history of mobilizing quickly to meet the needs of those affected by catastrophic events in the U.S. and its territories.”

The organization encouraged donations at https://ccusa.online/Ian for efforts to help those dealing with the storm’s destruction.

Florida Gov. Ron DeSantis said Sept. 28 that recovery efforts need financial assistance, and asked people to refrain from sending items, such as clothes, to Florida and send economic help or volunteer instead.

He also said he asked President Joe Biden for a major disaster declaration for the federal government to pay for recovery efforts in the state.