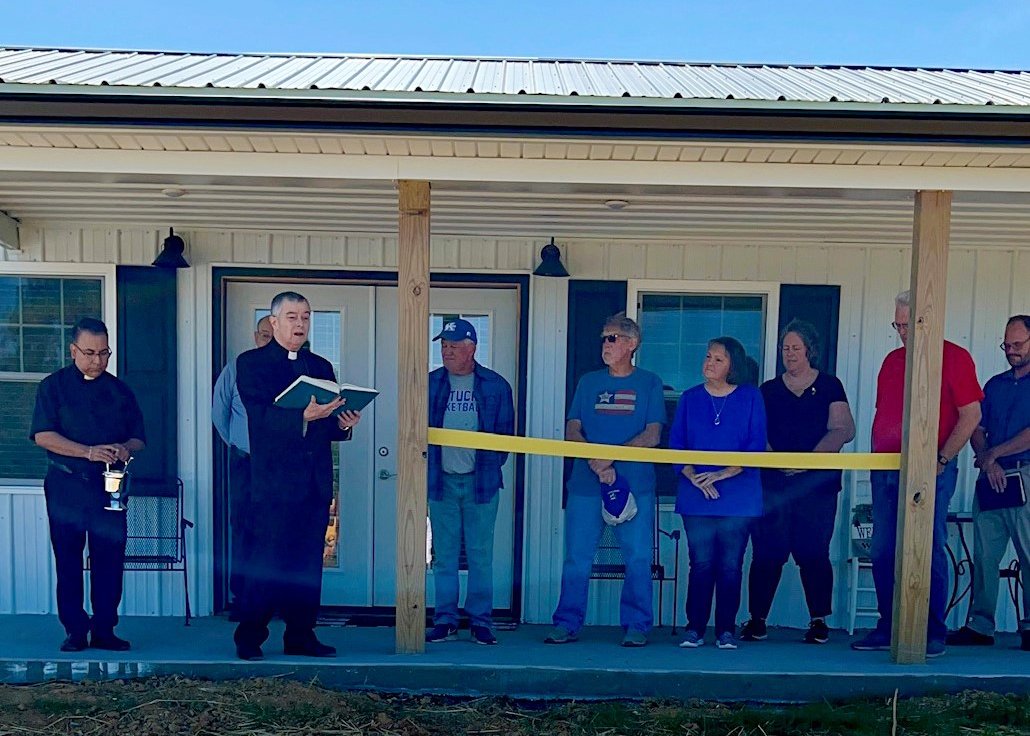 Bishop William F. Medley of Owensboro, Ky., speaks at a house dedication and ribbon cutting for the new home of Rickie and Bridget Filback in Hartford, Ky., Oct. 3, 2022. The Filbacks' house was destroyed in the Dec. 10, 2021, tornadoes. (CNS photo/courtesy Father Julio Barrera via Western Kentucky Catholic)

“What I believe now is that God spared us for a reason. Now we’re just waiting to see what it is,” said Filback, who with her husband, Rickie, survived the Dec. 10, 2021 tornadoes that devastated western Kentucky and destroyed the couple’s home in Hartford.

This fall though, emotions ran high as the Filbacks celebrated the dedication and ribbon cutting for their new house — built not far from the location of their former home.

The house is the first of what will be many rebuilt through the disaster relief work of Catholic Charities of the Diocese of Owensboro and other community organizations.

Joey Hazelwood, project manager for the long-term recovery group of Ohio County — where Hartford is located — said after the Oct. 3 dedication ceremony: “We couldn’t have done it without Catholic Charities.”

Katina Hayden, Catholic Charities’ director of disaster case management, met Hazelwood during one of the county’s meetings about long-term recovery and told him Catholic Charities could help because that’s what their disaster relief is about.

Hazelwood’s team broke ground for the Filbacks’ new house in March. Over the following months, his team and hundreds of skilled volunteers from across the country worked hard to provide the Filbacks with a new place to call home.

“I’ve seen amazing things these past six months,” Hazelwood said, adding: “it’s hard to explain … one of the best things is all the people we’ve gotten to meet.”

He said one group came from South Carolina over the summer and since then, they still text him every week to see how things are going.

“It went from costing $80,000 per house (to rebuild) to $130,000 per house,” she said. Still, the agency remains hopeful and grateful to those who have continued to donate.

“Those people who are willing to give the most are those who’ve been there,” she said, referring to those who have experienced natural disasters such as Hurricanes Sandy and Katrina and the California wildfires.

Owensboro Bishop William F. Medley, who was also present at the dedication and blessed the Filbacks’ home, said that he was proud to be there.

“I’ve never been through anything like this before,” he said of the tornadoes, “which is probably true of all of us here.”

The day after the storms, his phone started ringing with calls from Catholic organizations and churches from all over the nation.

“How can we help?” they all asked, to which Bishop Medley responded: “To be honest with you I don’t know, but we’re going to figure that out.”

The bishop explained to the crowd gathered at the Filbacks’ home, many of whom were not Catholic, that “there’s an organization called Catholic Charities USA that serves as an umbrella organization.”

He also credited the ecumenical efforts of fellow Christians in the community, especially Baptist and Methodist churches, who collaborated with Catholic Charities to lend a hand.

In sprinkling the Filbacks’ home with holy water, the bishop prayed for all impacted by natural disasters.

“We pray in a special way today for all of the thousands of people throughout western Kentucky whose lives were damaged by this storm,” he said. “We pray for our neighbors in eastern Kentucky whose lives have been damaged by the horrific floods; and for our neighbors throughout the country affected last week by the hurricanes.”

As of Sept. 30, the Diocese of Owensboro has received approximately $9.3 million to assist in tornado recovery efforts.

Catholic Charities looks forward to rebuilding more homes as they continue serving hundreds of clients who were affected by the tornadoes. Their goal remains to rebuild 350 homes in the next three to five years, and they welcome ongoing donations as well as skilled labor volunteers. More information about that can be found at owensborodiocese.org/tornado-relief-resources.

For their part, Filback and her husband remain overwhelmed with gratitude for the hundreds of people who helped them: “There’s no doubt in my mind that there’s a God,” she repeated.

“He did all this,” she said, gesturing around her beautiful new home.