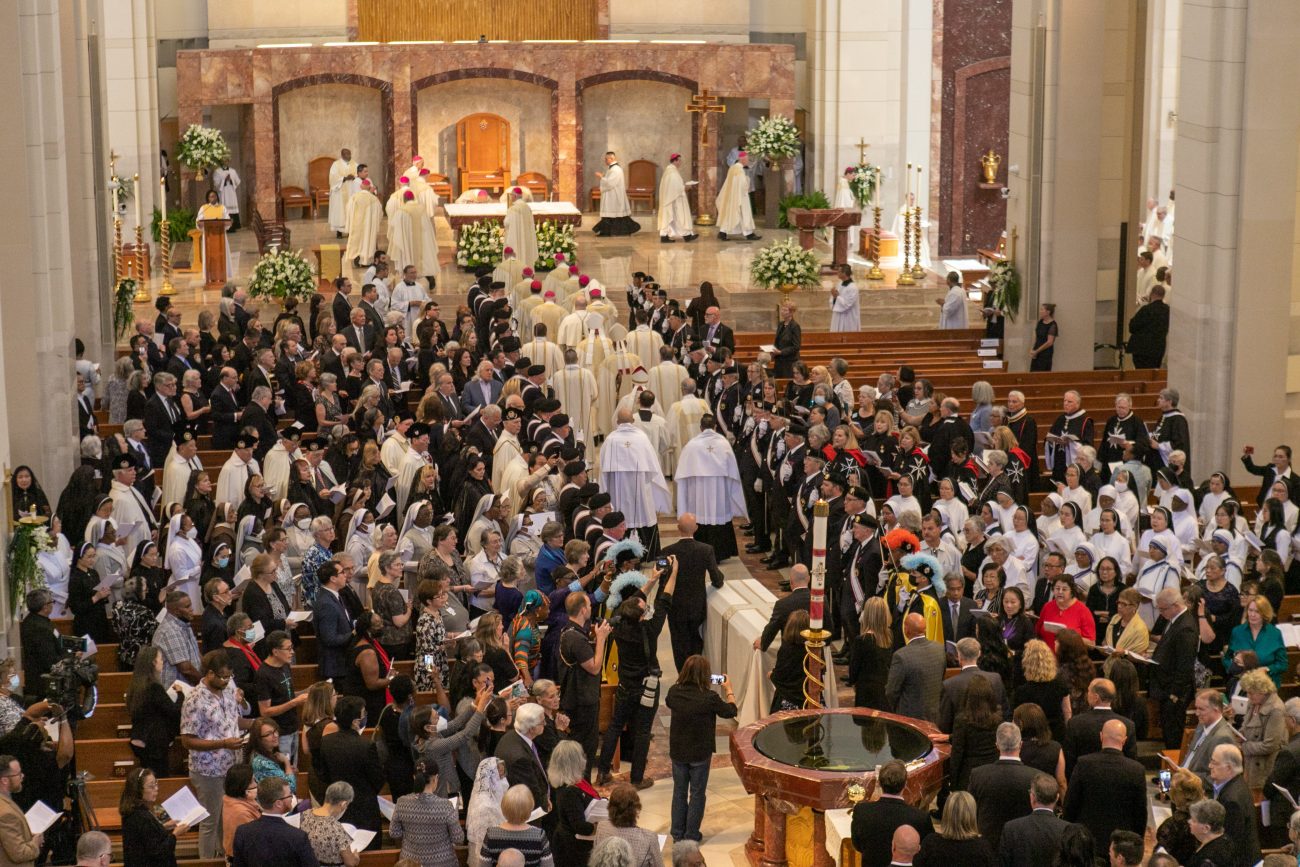 The hearse carrying the wooden casket of retired Archbishop Joseph A. Fiorenza of Galveston-Houston is processed through the Co-Cathedral of the Sacred Heart in Houston after his funeral Mass Sept. 29, 2022. The Co-Cathedral was built under Archbishop Fiorenza's leadership and direction. (CNS photo/James Ramos, Texas Catholic Herald)

HOUSTON (CNS) — Over the course of three days, thousands honored the memory and legacy of retired Archbishop Joseph A. Fiorenza, the longtime bishop of Galveston-Houston, who died Sept. 19 in Houston at the age of 91.

His Sept. 29 funeral Mass was celebrated by Cardinal Daniel N. DiNardo of Galveston-Houston. The homilist was Cardinal Wilton D. Gregory of Washington who served as a leader of the U.S. bishops’ conference alongside Archbishop Fiorenza in the early 2000s.

“He loved every race, every culture, every background and stood proudly with those for civil rights,” Cardinal Gregory said in his homily. “Even in his 90s, Joe was fully in charge of his life. His infirmities did not diminish his spirit.”

Cardinal Gregory said Archbishop Fiorenza fulfilled both the role of brother and minister of the Gospel “far better than he might ever have imagined.”

He also said the archbishop “saw Christ in the poor, the disenfranchised, prisoners, the physically and mentally impaired” and was “brave enough” to see Christ in people the world “often chooses to ignore.”

He pointed out that the archbishop was “born and became a priest during a time when segregation was a sanctioned tradition in many parts of our country. Joe, however, did not personally tolerate it or see its justification. His great heart welcomed and loved people of every race, culture, and background. His pastoral voice was an important source of strength for those who labored with him in the arena of Catholic social teachings. He stood proudly with those who labored for civil rights — even when it was unpopular and unappreciated.”

At the conclusion of the Mass, concelebrated by several cardinals and archbishops, Cardinal DiNardo said Archbishop Fiorenza “creased the world every day and expanded it and made those actions resonate with so many others.”

“He was a genuine man and faithful disciple,” he added. “He took seriously his vocation as a bishop of the church. He knew that being a bishop meant collaborating with many people just as the disciples walked together and following the Lord Jesus.”

After the funeral Mass, the archbishop was buried in a private service at Forest Park Lawndale Cemetery in Houston.

Earlier in the week, family and friends met with the Fiorenza family during a solemn reception of Archbishop Fiorenza’s body Sept. 27 at the Co-Cathedral of the Sacred Heart.

The next day, clergy, men and women religious, teachers, students, families and other community members paid their respects to the late archbishop at the co-cathedral while he lay in state. Auxiliary Bishop Italo Dell’Oro of Galveston-Houston presided over that evening’s vigil Mass, which was livestreamed.

Calling Archbishop Fiorenza “an icon of the Good Shepherd,” Bishop Dell’Oro, a native of Italy, recounted in his homily how then-Bishop Fiorenza invited him to dinner for his first Christmas in Houston after arriving in 1992. “He not only cooked the dinner, but he served us as well.”

Bishop Dell’Oro also shared about his visit with Archbishop Fiorenza before he died.
“First, as I was leaving, he asked me for a blessing,” the bishop said. “Then, as I thought that there was the possibility to not see him again … I asked him to bless me, which he did. (I’m) probably the last one to receive his blessing.”

With a life that took him around the world in service to the church, Archbishop Fiorenza lived by his motto, “Thy Kingdom Come,” bringing him into close partnership with many women religious regardless of charism or ministry, said Sister Francesca Kearns, a Sister of Charity of the Incarnate Word.

“He inspired us to see the vision that God has for the world and encouraged us to work in harmony that the needy might experience God’s love and assume the dignity that God has bestowed on all of us,” said Sister Kearns, the vicar for religious in the Archdiocese of Galveston-Houston. “He conveyed a sense that all our charisms blend together in promoting the Kingdom of God.”

“He was a man who inspired me with his humbleness and patience, with his sense of justice for the most disadvantaged,” she said.

“I know that he suffered very much when he knew that he had to be gone from his office for good. That place was where he felt at home. One could only see him at his desk reading his newspaper to realize how comfortable he felt there.”