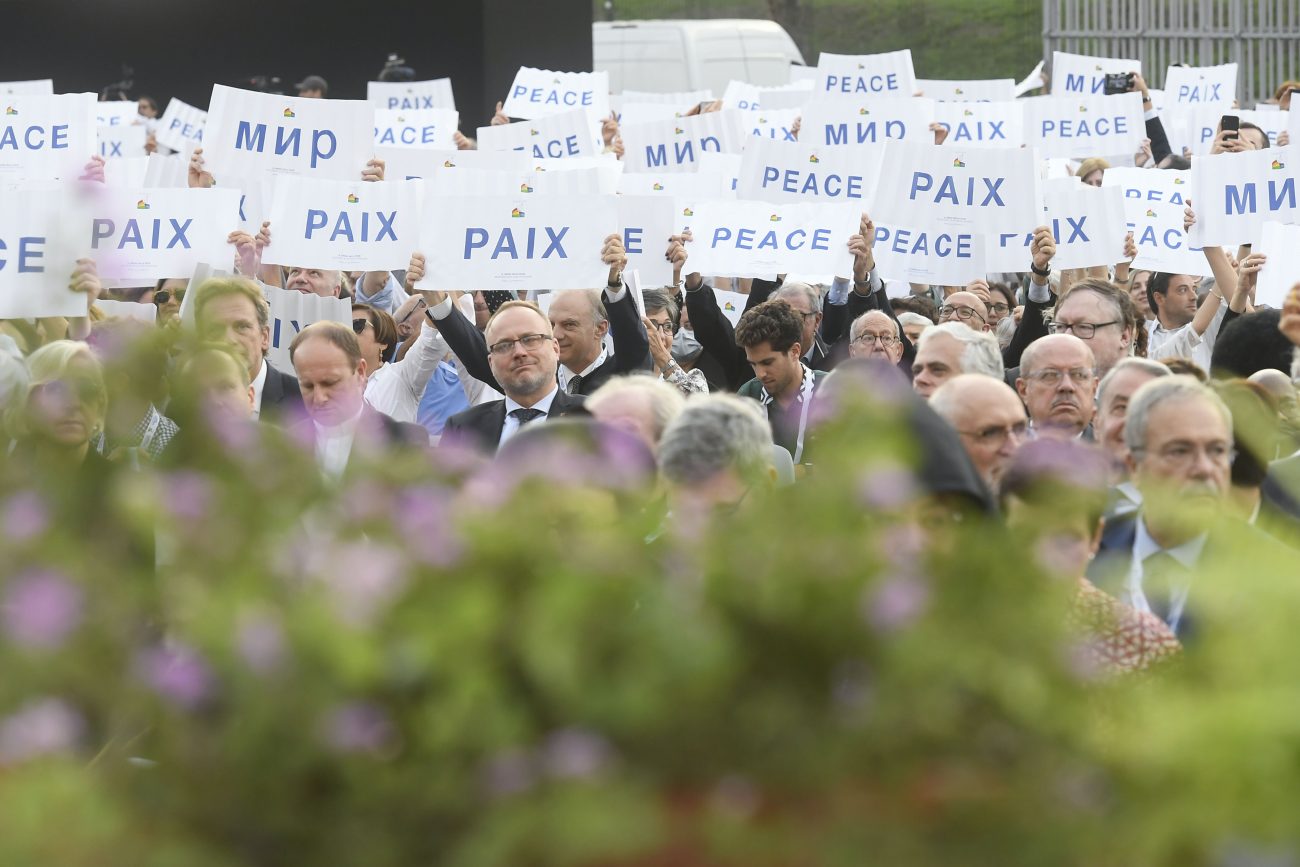 ROME (CNS) — Standing in front of an ancient symbol of violent battles, Pope Francis and religious leaders from around the world echoed “the cry for peace” of people suffering the impact of conflicts around the world, but especially in Ukraine.

At various spots inside and around Rome’s Colosseum Oct. 25, members of different religions prayed separately for peace before coming together with Pope Francis to issue their appeal to all their followers and, especially, to the modern-day emperors who send their gladiators to fight to the death.

But even as the location reminded people of the first-century battles, the specter of nuclear war lurked nearby.

Sixty years ago, the Cuban missile crisis had the world teetering on the brink.

And he quoted St. John XXIII’s words from Oct. 25, 1962: “We plead with all government leaders not to remain deaf to this cry of humanity. Let them do everything in their power to safeguard peace. They will thus spare the world the horrors of a war, the terrible consequences of which cannot be foreseen.”

Saying he made that appeal his own, Pope Francis told the crowd, “We are not ‘neutral, but allied for peace,’ and for that reason we invoke the ‘ius pacis’ (the right to peace) as the right of all to settle conflicts without violence.”

The event at the Colosseum, which included the signing of a formal “Appeal for Peace,” concluded the interreligious meeting the Community of Sant’Egidio sponsors each year to continue the relationships begun by St. John Paul II in 1986, when he invited religious leaders from around the world to join him in Assisi to pray for peace.

Marco Impagliazzo, president of Sant’Egidio, also quoted from St. John XXIII’s message during the Cuban missile crisis: “We recall the grave duties of those who have the responsibility of power. And we add: Let them hear the anguished cry that, from all points of the earth, from innocent children to the elderly, from individuals to communities, rises to heaven: Peace! Peace!”

Russia’s invasion of Ukraine, the continued fighting there and Russian officials’ continuing veiled threats to use nuclear weapons dominated the concerns at the three-day meeting, although they did not ignore the often-forgotten wars in Ethiopia, Syria, Yemen, South Sudan, Haiti, Myanmar, Nicaragua and elsewhere.

“Today peace has been gravely violated, assaulted and trampled upon, and this in Europe, on the very continent that in the last century endured the horrors of two world wars,” Pope Francis said. “Sadly, since then, wars have continued to cause bloodshed and to impoverish the earth. Yet the situation that we are presently experiencing is particularly dramatic. That is why we have raised our prayer to God, who always hears the anguished plea of his sons and daughters.”

But Russia’s war on Ukraine is different, he said. “Today, in fact, something we dreaded and hoped never to hear of again is threatened outright: the use of atomic weapons, which even after Hiroshima and Nagasaki continued wrongly to be produced and tested.”

Pope Francis told the crowd, which included other Christians as well as Jews, Muslims, Hindus, Sikhs and Buddhists: “Peace is at the heart of the religions, their sacred writings and their teaching.”

The religious leaders gathered in Rome, he said, have heard the plea for peace that is “suppressed in so many areas of the world, violated by all too many acts of violence, and denied even to children and the elderly, who have not been spared the bitter sufferings of war.”

“That plea for peace is often stifled, not only by hostile rhetoric but also by indifference,” he said. “It is reduced to silence by hatred, which spreads as the fighting continues.”

While peace is a gift of God, the pope said, it also must be “embraced and nurtured by us men and women, especially by those of us who are believers. Let us not be infected by the perverse rationale of war; let us not fall into the trap of hatred for the enemy.”

The appeal signed at the gathering said humanity is at a crossroads; people today can be either “the generation that lets the planet and humanity die, that accumulates and trades weapons, under the illusion of saving ourselves against others, or instead the generation that creates new ways of living together, does not invest in weapons, abolishes war as a means of conflict resolution and stops the abnormal exploitation of planetary resources.”