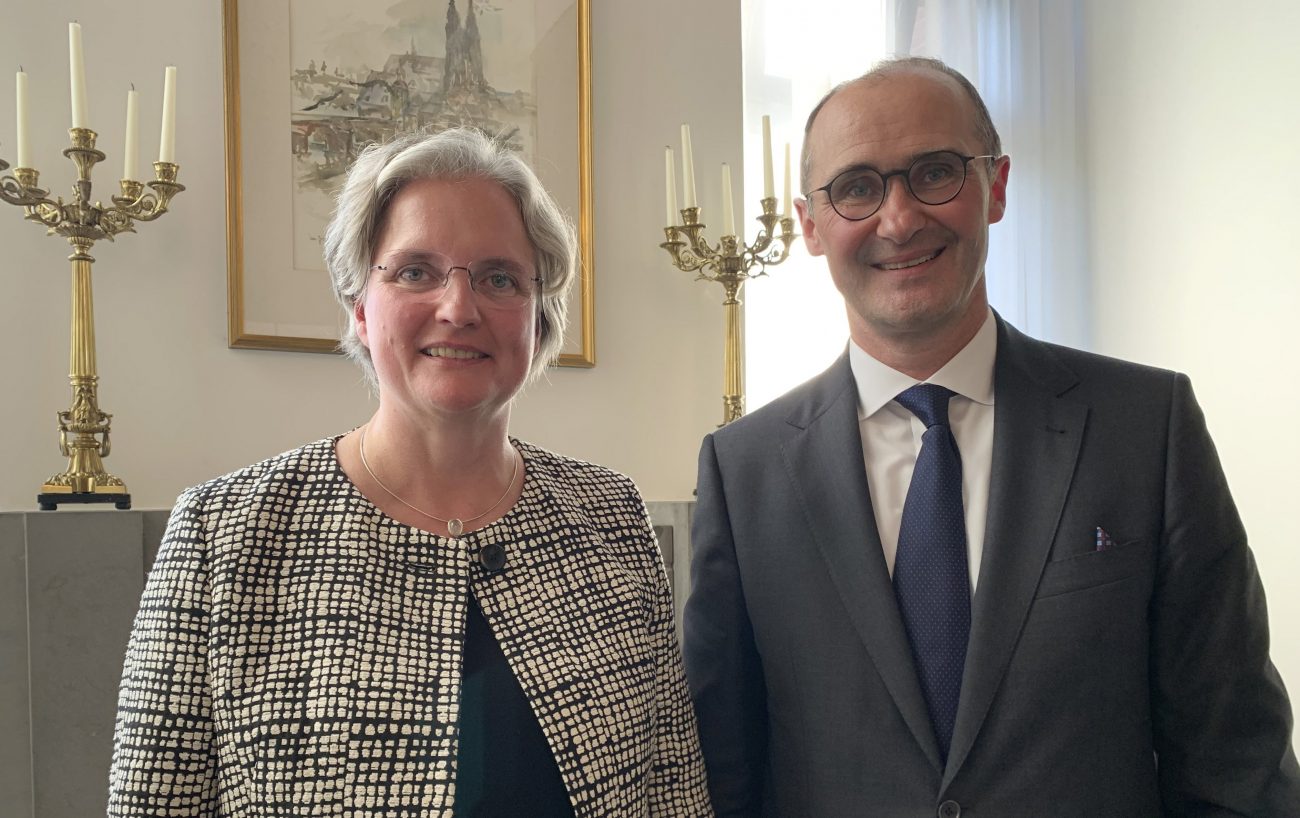 Charlotte Kreuter-Kirchhof, a member of the German Synodal Assembly and of the Vatican Council for the Economy, stands with Bernhard Kotsch, German ambassador to the Holy See, after her presentation about the Synodal Path Oct. 4, 2022, at the German Embassy to the Holy See in Rome. (CNS photo/Cindy Wooden)

ROME (CNS) — German Catholics involved in the Synodal Path are convinced the church must address the “systemic causes” of the clerical sexual abuse scandal and that will require change, said Charlotte Kreuter-Kirchhof, a member of the German Synodal Assembly.

Kreuter-Kirchhof, a professor of law and member of the Vatican Council for the Economy, spoke about the Synodal Path at a conference Oct. 4 at the German Embassy to the Holy See.

The fourth assembly of the Synodal Path was in September. The fifth and final meeting is scheduled for March.

In the wake of the clerical abuse scandal and with the release of a major study of its causes, the German bishops’ conference and the Central Committee of German Catholics launched the Synodal Path in 2019. The process began with forums to discuss issues in the four areas the study identified as containing the “systemic causes” of sexual abuse and its cover-up: the exercise of power in the church; sexual morality; priestly existence; and the role of women in the church.

“Abuse has brought endless suffering to the victims,” Kreuter-Kirchhof said, and “the church has lost an infinite amount of trust.”

“The only way out is to address the systemic causes” of abuse, she said.

The German bishops are scheduled to make their “ad limina” visits to the Vatican Nov. 14-19, and addressing questions and doubts about the Synodal Path is expected to be a major topic. In fact, the officers of the bishops’ conference were at the Vatican in early October to finalize plans for the “ad limina,” which is expected to include a joint meeting with Pope Francis and the heads of major Vatican offices to discuss the Synodal Path.

In her presentation, Kreuter-Kirchhof said, “It is important to note that this is not a process taking place only in Germany,” since a similar process of prayer, discussion and discernment in preparation for the world Synod of Bishops in 2023 is bringing up many of the same concerns and hopes for change around the globe.

The four forums of the Synodal Path presented their work at meetings of the Synodal Assembly, with proposals for documents to be discussed and amended and then presented a second time for more discussion and a vote. To pass, the documents must be approved by two-thirds of the German bishops and two-thirds of the laity, priests and religious in the assembly. The recommendations in some approved texts can be adopted without approval from Rome, but others must be referred to the Vatican before implementation.

Documents approved by the assembly, meeting for the fourth time in September, included those regarding the position of women and trans people in the church, gay priests and the future national leadership structure of the Catholic Church, reported the German Catholic news agency KNA. It said all texts involving changes to church doctrine were formulated as proposals for consideration by the pope and not as independent dogmatic changes by the German church.

However, the 30-page “foundational” text on sexuality, calling for a new approach to sexual ethics by the church, failed to garner the approval of two-thirds of the bishops.

With the bishops’ vote, Kreuter-Kirchhof said, “the whole Synodal Path came close to a failure,” not primarily because only 61% of the bishops approved it, but because most of the bishops who voted against it “never disclosed their concerns at any point prior to the vote,” whether in the drafting forum, during the discussion and amending of the first draft or in the discussion before the final vote.

“The synodal church is the place of common faith, of listening to one another, of discerning together and of common decision,” she said.

The Catholic Church is a hierarchical church, and bishops legitimately have a special responsibility, but they cannot operate in a vacuum, she said. “After the crisis” at the September assembly, “synodality worked better than before once the bishops started speaking up.”

NEXT: Tourist detained after toppling busts at Vatican Museums