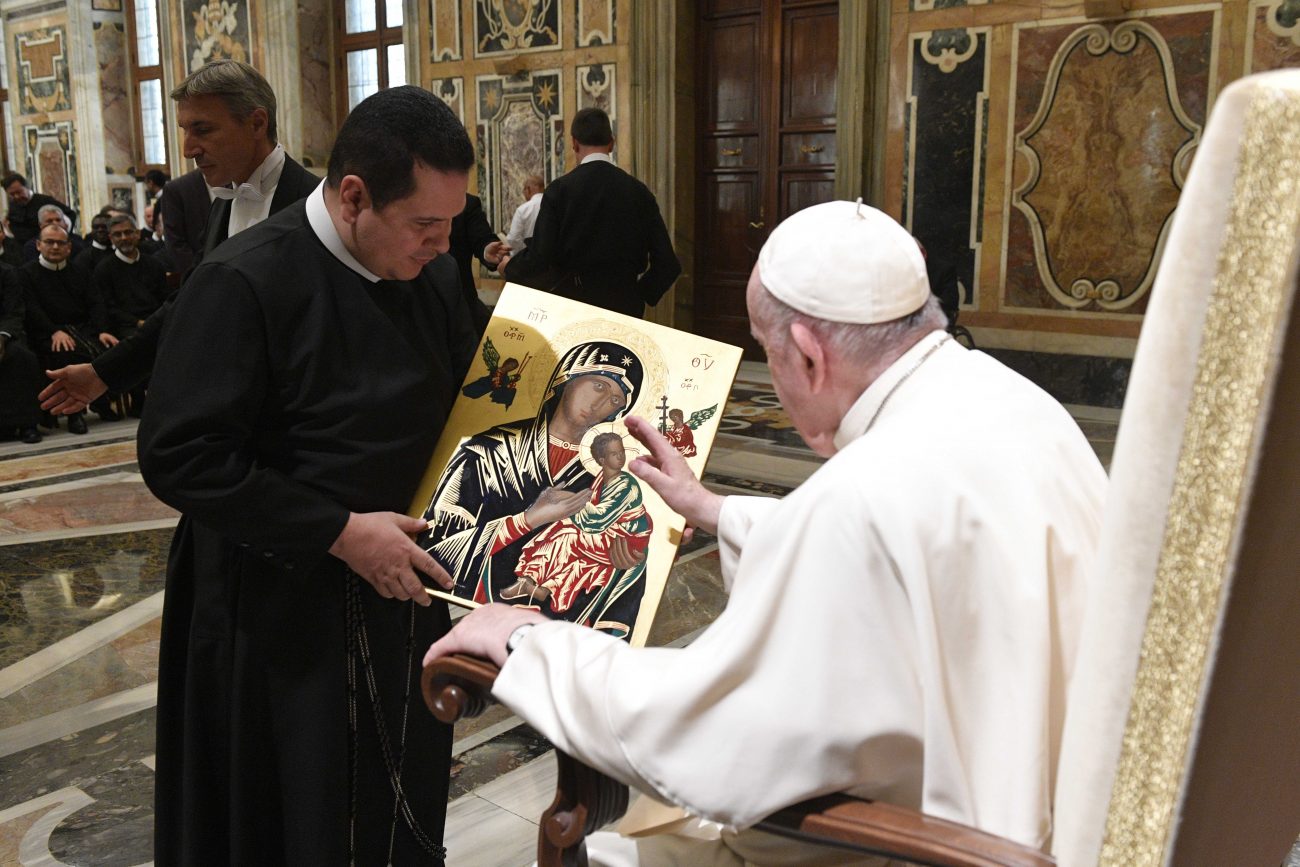 Pope Francis looks at a Marian icon during an audience with Redemptorists who are in Rome for their general chapter, at the Vatican Oct. 1, 2022. The Redemptorists elected a new superior general, Father Rogério Gomes. (CNS photo/Vatican Media)

VATICAN CITY (CNS) — True missionaries of hope allow the Holy Spirit into their hearts and lives, Pope Francis told members of the Congregation of the Most Holy Redeemer, known as the Redemptorists.

Those who remain attached to what makes them feel secure “risk succumbing to ‘sclerocardia’ (a hardened heart), which prevents the Spirit’s action,” the pope said in a text distributed Oct. 1 to Redemptorists who were in Rome for their order’s general chapter.

“We must not put obstacles in the way of the Spirit’s renewing action, first of all in our own hearts and lifestyles. Only in this way do we become missionaries of hope!” the pope wrote in the text, which he decided not to read during his audience with the group.

“The church and consecrated life are experiencing a unique historical moment in which they have the opportunity to renew themselves in order to respond with creative fidelity to Christ’s mission,” the pope wrote. “This renewal comes through a process of conversion of heart and mind,” in which there is a change in one’s way of life resulting from repentance or spiritual conversion, “and also through a change of structures.”

“Sometimes we need to break the old water jars, inherited from our traditions, which have carried so much water but have now fulfilled their function,” he said.

Breaking those old vessels, which are “full of affections, cultural customs and histories, is not an easy task, it is painful, but it is necessary if we want to drink the new water that comes from the spring of the Holy Spirit, the source of all renewal,” he said in the text.

The pope also welcomed the congregation’s new superior general, Father Rogério Gomes, who was elected Sept. 27 during the general chapter being held Sept. 11-Oct. 7 in Rome.

Father Gomes, who was to celebrate his 48th birthday Oct. 7, was born in Alterosa, Brazil. He was ordained a priest in 2006 and completed advanced studies in moral theology.

He taught moral theology, bioethics and other courses at a number of academic institutes in Brazil and was later appointed professor at the Alphonsian Academy in Rome.

He was elected provincial superior of the province of São Paulo in 2014 and soon after as the president of the Union of the Redemptorists of Brazil. He also served as general consultor from 2016 to 2022.

According to the Redemptorist website, Father Gomes is currently a guest professor at the Alphonsian Academy and a member of the Brazilian Society of Bioethics, the Brazilian Society of Moral Theology, the Surveillance Studies Network, and a group dedicated to the “Human Person, Anthropology, Ethics and Sexuality” at the Pontifical Catholic University of São Paulo. He speaks Portuguese, Italian, Spanish and English.

NEXT: Germany’s Synodal Path continues to draw attention in Rome