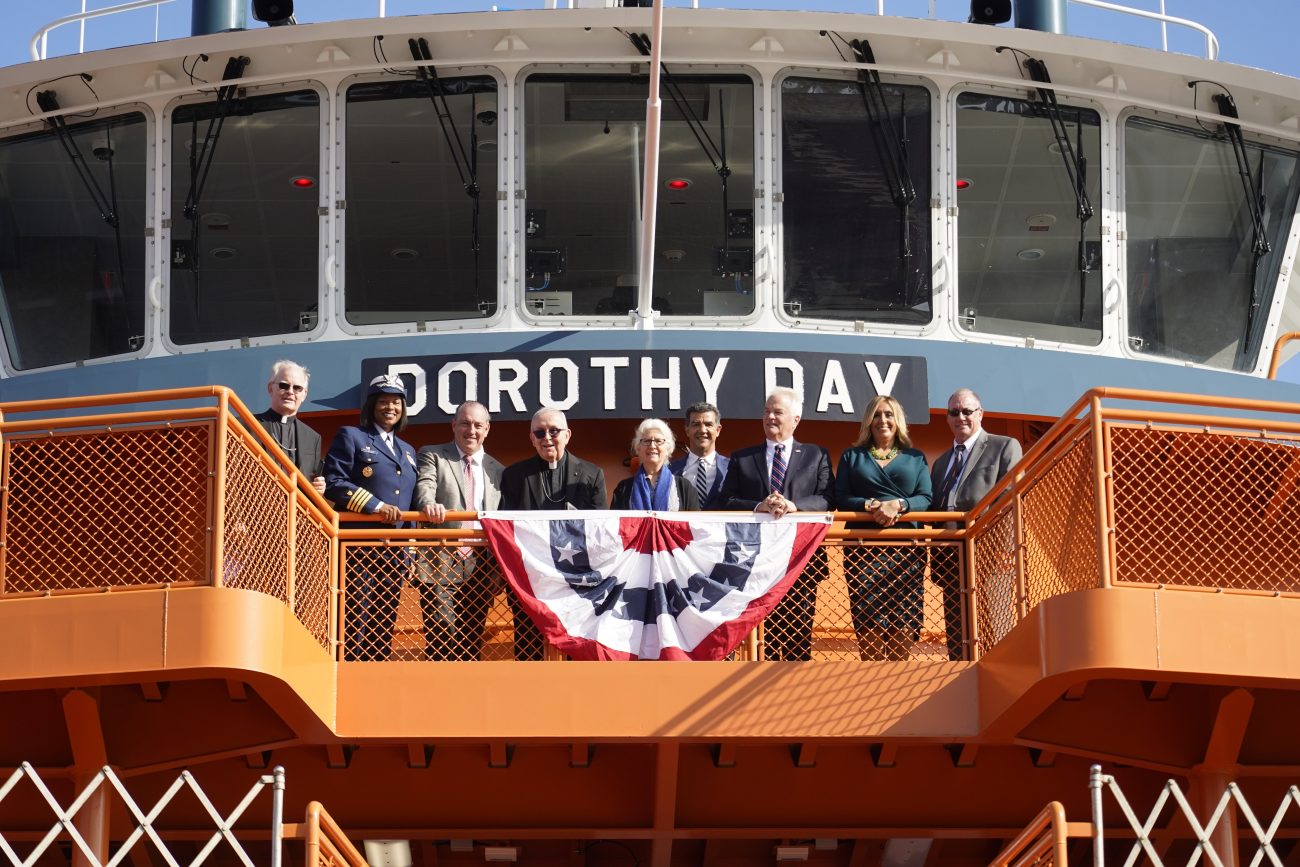 Martha Hennessy, center, granddaughter of Dorothy Day, gathers with other dignitaries Nov. 4, 2022, during a commissioning ceremony for the Dorothy Day ferry boat at St. George Ferry Terminal in Staten Island, N.Y. The newest vessel in the Staten Island Ferry fleet is named for the co-founder of the Catholic Worker Movement, who was received into the Catholic Church on Staten Island, lived part of her life in that New York City borough and is buried in the island's Resurrection Cemetery. Day is a candidate for sainthood and has the title "Servant of God." (CNS photo/Gregory A. Shemitz)

STATEN ISLAND, N.Y. (CNS) — Martha Hennessy, granddaughter of Dorothy Day, said her grandmother “loved the Staten Island Ferry, so what an honor to have one named after her.”

“In these days of global instability, let us use this moment to remember her efforts to make peace,” Hennessy, herself a social justice activist, said at a Nov. 4 ceremony to officially commission the Dorothy Day ferry boat at St. George Ferry Terminal in Staten Island.

The newest vessel in the fleet that transports passengers from the island in New York Harbor to lower Manhattan and back is named for the co-founder of the Catholic Worker Movement.

Day had deep roots on Staten Island, one of New York’s five boroughs. She was received into the Catholic Church there and lived part of her life there. As an adult, she was baptized at Our Lady Help of Christians Church in Tottenville in 1927.

Day also began a cooperative farm in Pleasant Plains in 1950, operating it for the needy and Catholic Worker members until 1964, when it was sold. She died in 1980 at age 83 and is buried in Resurrection Cemetery, also in Pleasant Plains.

It was in Manhattan where Day met Peter Maurin and started The Catholic Worker newspaper in the depths of the Great Depression and Mary House, the first Catholic Worker hospitality house, of which there are more than 250 worldwide today.

Day is a candidate for sainthood and was given the title “Servant of God” when her cause was officially opened in 2000.

“Dorothy Day represents so much of what is great about New Yorkers and our city, and we are proud to honor her by commissioning this Staten Island Ferry (boat),” said New York Mayor Adams said in a Nov. 4 statement.

“Having her name on this boat will remind New Yorkers and visitors alike of her fight for peace and against hunger, fights that we are continuing every day,” he said. “Thank you to all of those carrying on her legacy.”

Calling the Staten Island Ferry “a staple of life in New York,” Deputy Mayor Meera Joshi noted it shepherds “almost 10 million people to and from Staten Island every year.”

Day “was an incredible activist and a stalwart New Yorker,” he added. “I’m glad that we are honoring her memory with our newest ferry (boat). … I can’t wait to take a ride on the Dorothy Day.”

Attendees included Kathleen Jordan, a longtime friend of Dorothy Day and a former editor at The Catholic Worker newspaper, and Sisters Mary de Paul and Mary Joseph, of the Dominican Sisters of Hawthorne, N.Y.

Music was provided by Bud Courtney, founder of the Dirty Rotten System Band, who performed with Amanda Daloisio, Jeannine Otis and Anthony Donovan.

When then-Mayor Bill de Blasio of New York announced in March 2021 that one of three new Staten Island Ferry boats would be named for Day, he recalled her life of “tremendous selflessness and service” and said he could think of “no greater way to honor her beloved legacy” than name this new ferry boat after her.

“How providential that the ferry from lower Manhattan to Staten Island should be named after a brave, loving woman who cherished both those areas of our city and the people who live there,” Cardinal Timothy M. Dolan of New York said in a statement last year when the naming of the vessel was announced.

“How appropriate that a ferry transporting people would honor a believing apostle of peace, justice and charity who devoted her life to moving people from war to peace, from emptiness to fullness, from isolation to belonging,” he said.

NEXT: Iowa priest who helps Latinos find their voice will receive CCHD award