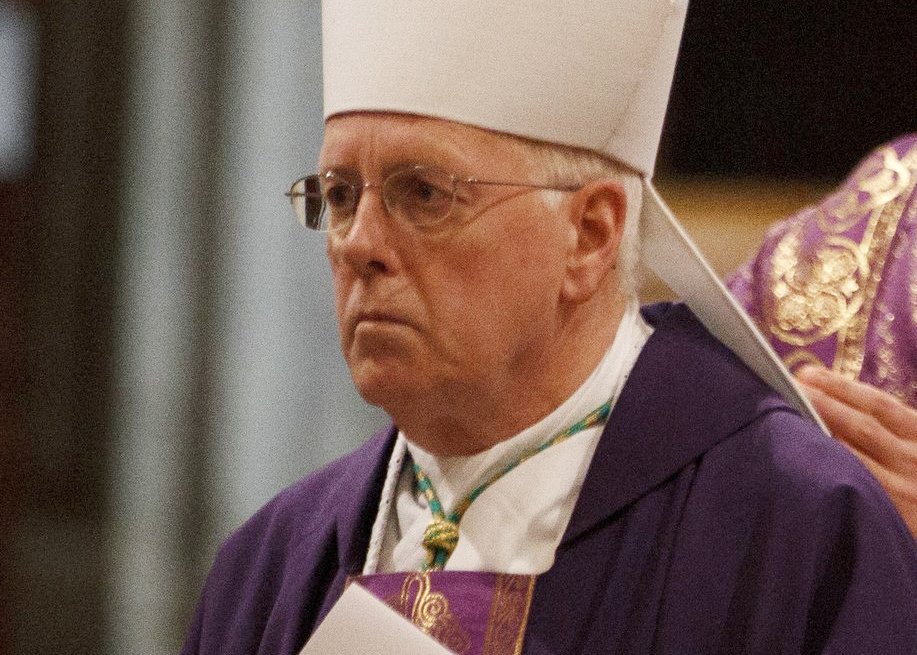 Retired Bishop Paul J. Swain of Sioux Falls died Nov. 26 while in hospice care at Dougherty House, nearly 15 years to the day since he had blessed the Avera health services facility as head of the diocese. He was 79.

“It is with heavy heart that we announce the passing of Bishop Emeritus Paul J. Swain,” the Sioux Falls Diocese stated Nov. 27 on Facebook. “Bishop Swain entered into eternal life late last night, after receiving all of the sacraments and prayers the church offers as one approaches death. In your kindness, please hold Bishop Swain in your prayers.”

Visitation will begin the afternoon of Dec. 2 at the Cathedral of St. Joseph in Sioux Falls. In the evening recitation of the rosary will be followed by a liturgical wake service.

A funeral Mass will be celebrated Dec. 3 at the cathedral with Archbishop Bernard A. Hebda of St. Paul and Minneapolis presiding.

Bishop Swain served as spiritual shepherd for Catholics in eastern South Dakota for 13 years — from his appointment by Pope Benedict XVI in 2006 until his retirement at age 76 in 2019.

During those years, Bishop Swain ordained 33 men to the priesthood and 20 men to the permanent diaconate. He also led the diocese in a project to restore the Cathedral of St. Joseph to its beauty as envisioned by the original architect.

Addressing Mass congregants on the day he dedicated the new altar July 26, 2011, Bishop Swain said his prayer was that the restored cathedral “will be a shining light on the hill outside and in, by the beauty of sacred things and by the beauty of faith lived well, can therefore be a sign of the hope that can only be fulfilled in Christ.”

The bishop also oversaw the creation of the Bishop Dudley Hospitality House, an emergency shelter for individuals and families, which opened its doors January 12, 2015. It is named for the late Bishop Paul V. Dudley, who headed the Sioux Falls Diocese from 1978 to 1995.

At its blessing and opening, Bishop Swain described the new facility as “more than a shelter, it will be a beacon of hope, a house of hospitality that welcomes, that treats each person with respect, that seeks to help address special needs, that offers a helping hand, that says you matter and that sees Christ in each person with wisdom of the heart, that calls each person by name.”

Among other highlights of his tenure, Bishop Swain blessed eight different properties in six communities that were erected by St. Joseph Catholic Housing to provide affordable housing for families. He also blessed seven different facilities built by Avera to expand its health care outreach.

He spent time praying the rosary in front of Planned Parenthood nearly every month that he served as bishop. He joined with Bishop Robert D. Gruss, then head of the Rapid City, South Dakota Diocese, to create the South Dakota Catholic Conference as the public policy arm of the church in South Dakota.

He led an effort to erect a permanent home for the Adoration Sisters of the Blessed Sacrament, who pray continuously for the needs of the diocese. At the invitation of U.S. Sen. John Thune, R-S.D., Bishop Swain also served as chaplain to the U.S. Senate for a day and led eight different pilgrimages to holy sites across the globe.

Facing a decline in the number of available priests and the withdrawal of religious orders who were serving the Sioux Falls Diocese, Bishop Swain oversaw a consultative planning process that involved over six years of listening sessions and facilitated meetings.

Paul Joseph Swain was born Sept. 12, 1943, in Newark, New York, the fifth of William E. and Gertrude Swain’s six children. He and his siblings were raised by their grandparents.

As a child, Paul received his religious formation in the Methodist church. He would attend Sunday school classes and Sunday services with his grandparents. In high school, he first aspired to be an attorney and took an interest in the political process. He graduated from Newark High School in 1961.

At the prompting of a neighbor whose son was a professor at Ohio Northern University in Ada, Ohio, he enrolled and studied history. He moved to Madison, Wisconsin, in 1965 and enrolled at the University of Wisconsin-Madison to pursue a master’s degree in political science.

He voluntarily entered the military as an intelligence officer in the U.S. Air Force, serving in Vietnam from 1967 to 1972. He earned the Bronze Star Medal during his service. He then was legal counsel and policy director for Wisconsin Gov. Lee Dreyfus, a Republican, from 1979 to 1983. The future bishop also practiced law in Madison.

He became a Catholic at age 39, studied for the priesthood at Pope St. John XIII Seminary in Weston, Massachusetts, as a seminarian for the Diocese of Madison. He was ordained May 27, 1988, by Bishop Cletus F. O’Donnell.

Then-Father Swain held many positions in the diocese including as vocations director, moderator of the curia, priest secretary and vicar general.

He was vicar general under Madison Bishop Robert C. Morlino when he was named to head the Sioux Falls Diocese Aug. 31, 2006.

In a statement on his appointment, Bishop-designate Swain described his adult life as being marked by two phases.

“One was in the secular sphere that included military service, civil law practice and government office. The second came after undergoing a spiritual conversion that changed and refocused my life,” he said.

“My years in the secular life were exciting and interesting, yet filled with the lures that can result in excessive focus on the things of the world and an individualism that can warp priorities and moral values,” he said. “They also revealed a yearning for something more than professional success.”

“It is in the church that I found the forgiveness and mercy that I needed and still need,” he said.

Bishop Swain was preceded in death by his parents and his five siblings and three of their spouses. He is survived by one sister-in-law.

PREVIOUS: Young people tell bishops of their desire to grow in faith, in the church