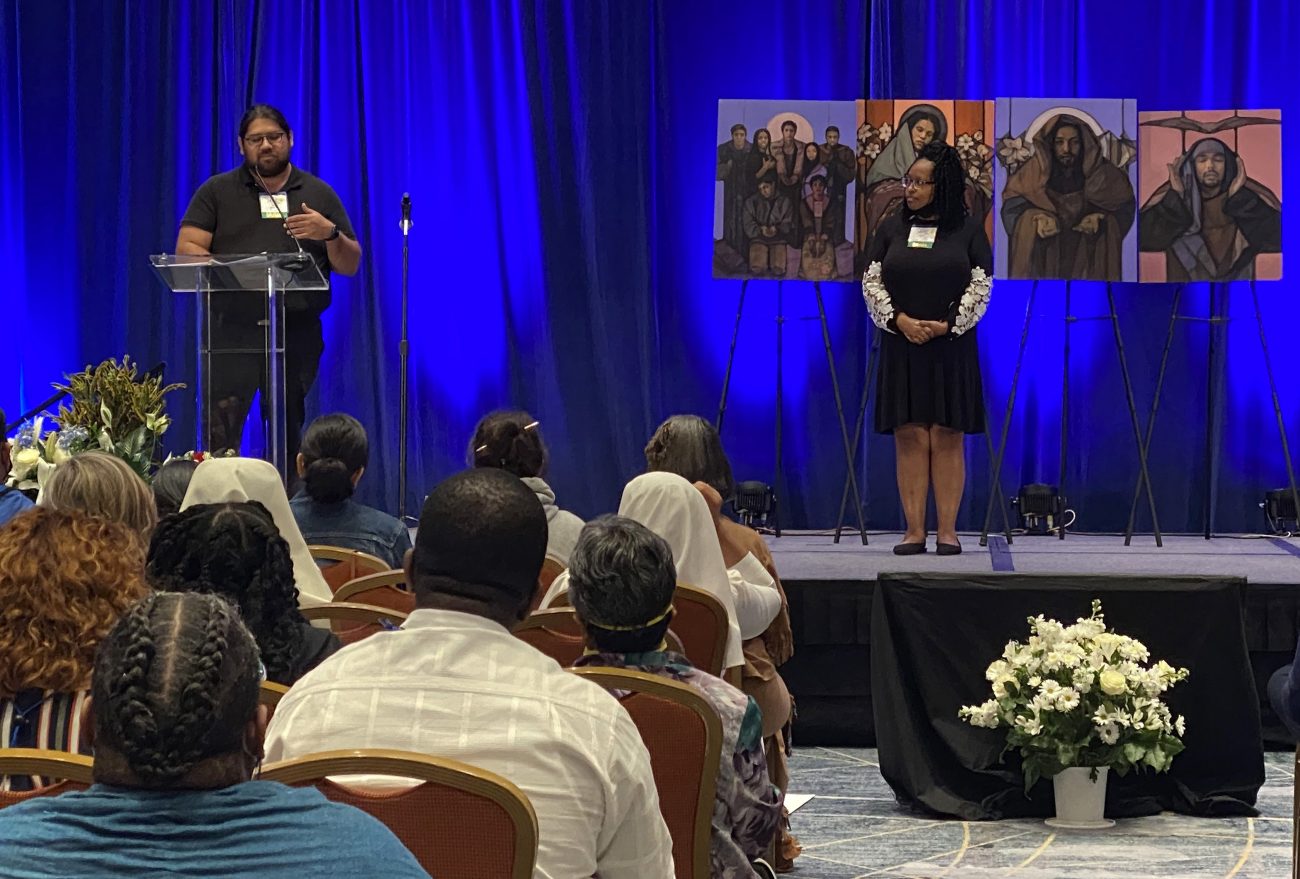 If honesty is indeed the best policy, then two young people addressing the U.S. bishops about the joys and struggles of growing in faith became policymakers during a Nov. 16 session at the bishops’ annual fall general assembly in Baltimore.

Rudy Dehaney and Cecilia Flores opened up about their own experiences and the stumbling blocks that can get in the way.

The two were selected as delegates from their respective dioceses to attend a June 23-26 gathering in Chicago called “Alive in Christ: Young, Diverse, Prophetic Voices Journeying Together.” About 325 ministry leaders, young adults and bishops came together for the “Journeying Together” process.

Dehaney, a campus minister at Notre Dame of Maryland University in Baltimore, recounted one episode that happened at the gathering.

Known as “the music guy,” Dehaney, who is Black, said that on Sunday mornings, “gospel music could be heard at home, or at my parish.”

On the first night of the Chicago gathering, some attendees were “speculating and anticipating would be sung at the next day’s Mass. You could hear ‘Total Praise’ or ‘Hallelujah! Salvation and Glory.’ As we remembered those songs we grew up on, there was joy in our hearts that night,” Dehaney told the bishops.

“When we did not hear the songs that day, we felt disappointed and that it was a missed opportunity,” he said. “It was not the first time,” he added, yet “it is not unique to our culture. You say you get used to it, but you don’t.”

It turned out that Flores was the one who interceded. “She heard us lament and sing another round of songs,” Dehaney said. “It turns out we were rehearsing that night,” as their favorites were incorporated into another liturgy.

Dehaney said all it took was “honesty, awareness, inclusion and healing.”

There were “moments of tension which appeared and perhaps felt chaotic” in Chicago, Flores acknowledged. But there was “a greater reality happening that brought me great joy and hope: shepherds being shepherds, and disciples of the Lord being disciples. The disciples felt their pain; the shepherds listened.”

Rejection and clericalism are but two of the reactions young people face more frequently, Flores said. “I wonder what it could be like if we lived church like this every day,” she added, “if young adults felt seen, loved, heard, trusted,” and “what it would take for us to get there.”

Flores, a community organizer in Sacramento, California, and chair of the “Journeying Together” young adult multicultural advisory committee, told the bishops that “fostering interpersonal relationships and intergenerational dialogue is needed.”

From the Chicago experience, she said, “emerged a new community of leaders with a desire to share their gifts with the church and with the world. Often when we don’t see our needs met, young adults often take it into our own hands. This has already started, and is taking on many forms,” including, she said, the creation of regional support groups emanating from the Chicago session.

“We are part of God’s conversation with the world,” Flores said. “We have all heard that young adults are leaving the church, but we have also heard about amazing ministries shared by young adults all over.”

“We have a deep desire to be in deeper relationship and a conversation with all of you,” she said, “to be loved by you, or be led by, fought for and guided by you.”

“Journeying Together” is an initiative of the U.S. Conference of Catholic Bishops. It’s a process that began two years ago, inspired by Pope Francis’ 2019 exhortation on young people, “Christus Vivit” (“Alive in Christ”), and the 2018 the Synod of Bishops on young people.

Organizers said the process seeks to start an encounter, dialogue and accompaniment and pastorally respond to the hopes and challenges of culturally diverse young people.

The “Journeying Together” name came from a passage in the  pontiff’s exhortation: “If we journey together, young and old, we can be firmly rooted in the present, and from here, revisit the past and look to the future.”

Suggestions and conclusions of the Chicago gathering are being compiled and will be offered as a resource to dioceses, schools, Catholic organizations and apostolic movements.

PREVIOUS: Catholics urged to focus on Holy Family, the Eucharist during Advent