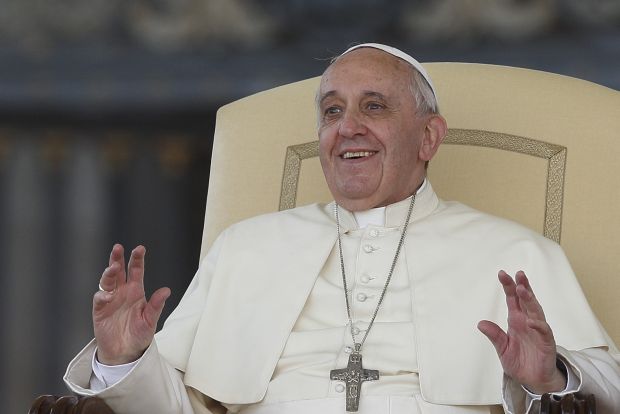 VATICAN CITY (CNS) — If individuals and nations are serious about protecting human rights and promoting peace, they must do much more to curb the global arms trade and assist immigrants, Pope Francis told seven new ambassadors to the Vatican.

There are “stories that make us weep and feel ashamed: human beings — our brothers and sisters, children of God — spurred by a desire to live and work in peace, who face exhausting journeys and are subject to extortion, torture, abuse of every kind and sometimes end up dying in the desert or at the bottom of the sea,” the pope said May 15.

Forced migrations, conflicts and the proliferation of weapons are closely tied phenomena, the pope told new ambassadors from Switzerland, Liberia, Ethiopia, Sudan, Jamaica, South Africa and India. “They are wounds in a world that is our world, the place where God put us to live today and where he calls us to be responsible for our brothers and sisters so that no one’s human dignity is violated.”

Welcoming the new ambassadors, Pope Francis said, “everyone speaks of peace, all declare they want it, but unfortunately the proliferation of weapons of every kind goes in the opposite direction.”

“It would be an absurd contradiction to speak of peace, negotiate peace and, at the same time, promote or permit arms sales,” the pope said. He called for “a new season of coordinated and courageous efforts” to limit arms sales and reduce weapons stockpiles.

Another challenge to peace, he said, one which often is “really and truly a human tragedy,” is the phenomenon of people being forced to leave their homelands because of civil conflict and a lack of respect for their rights.

While many governments, international organizations and religious groups rally to respond to the needs of immigrants in certain emergency situations, he said, the problem has become so widespread that “the moment has come to face it with a serious and responsible political overview.”

The story of immigrants, even recently, has included those who found a dignified welcome and a helping hand, enabling them to escape an “inhuman situation and reclaim their dignity, freedom and security,” Pope Francis said. But unfortunately, many others don’t find a helping hand.

“It would be cynical to proclaim human rights and, at the same time, ignore or not help these men and women who, forced to leave their homelands, die in the attempt or are not welcomed with international solidarity.”

NEXT: Arab Christians can serve as a bridge between East, West, observers say