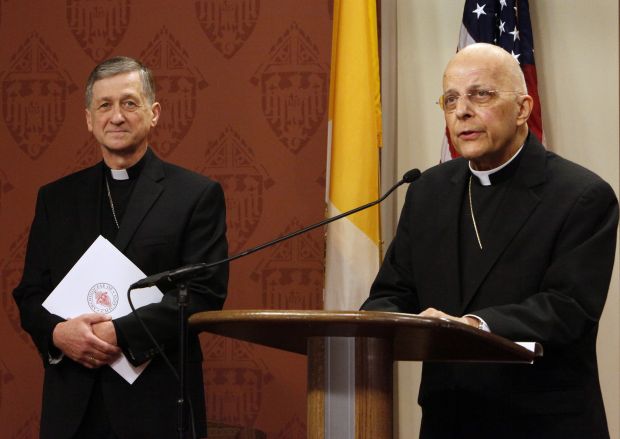 The appointment was announced Sept. 20 in Washington by Archbishop Carlo Maria Vigano, apostolic nuncio to the United States.

Archbishop Cupich, 65, will be installed in Chicago Nov. 18 during a Mass at Holy Name Cathedral in Chicago.

Cardinal George is 77, two years past the age when bishops are required by canon law to turn in their resignation to the pope. He retains the office of archbishop until his successor’s installation.

The cardinal was first diagnosed with bladder cancer in 2006 and had a recurrence of cancer in 2012. In August, the archdiocese announced that he was participating in a clinical research trial for a new cancer drug.

His health concerns stepped up the process of searching for his successor as archbishop of Chicago.

Cardinal George introduced Archbishop Cupich (pronounced “Soo-pich”) during a news conference held at the Archbishop Quigley Pastoral Center in Chicago the day the appointment was announced.

“Bishop Cupich is well prepared for his new responsibilities and brings to them a deep faith, a quick intelligence, personal commitment and varied pastoral experiences,” Cardinal George said.

The new archbishop is no stranger to Chicago having served on the board of Catholic Extension since 2009. The Chicago-based organization supports the work and ministries of U.S. mission dioceses.

Archbishop Cupich said his appointment “humbles and encourages” him and his priority as the new archbishop is to be attentive to the way God is working through the people in the archdiocese.

He learned of the appointment 10 days before the announcement and said he felt overwhelmed and surprised when Archbishop Vigano called him.

Some in the media describe Archbishop Cupich as a moderate but when asked about the description, he said, “Labels are hard for anybody to live up to, one way or another. I just try to be myself and I try to learn from great people. You’ve had great people here in this archdiocese pastor you. And I’m following a great man.”

When asked if his appointment — the first major appointment made by Pope Francis in the United States — sends a message about the pontiff’s agenda, Archbishop Cupich said no.

“I think the Holy Father is a pastoral man. I think that his priority is to send a bishop, not a message,” he said.

That Archbishop Cupich’s new flock is a lot larger than his present flock is not lost on him.

“This is an enormous upgrade, so to speak,” Archbishop Cupich told the media. “We had a hundred thousand Catholics in eastern Washington and I had 27,000 Catholics in South Dakota.” There are 2.2 million Catholics in the Archdiocese of Chicago, which is the third largest archdiocese in the nation.

When pressed on what tone he will bring to the archdiocese, the new archbishop said: “I think it’s really important to keep in mind that it’s not my church, it’s Christ’s church. I have to be attentive to his voice in the lives of the people and the word of God and the way that he communicates to all of us through the pointers that he gives.”

In an interview with the Catholic New World following the new conference, Archbishop Cupich thanked Catholics in archdiocese for their warm welcome and said he looks forward to visiting parishes and communities.

“I really am sincere in saying I know that I can only do this if I have their support and prayers. I want to be very pronounced in asking, begging for their prayers,” he told the archdiocesan newspaper.

Archbishop Cupich did his doctoral work on Scripture readings used in the liturgy and that remains a part of his spiritual nourishment, he said.

“I find that, not just the word of God in the Bible, but the convergence of how the texts are put together in the liturgy is a source of my own spiritual life.”

Born March 19, 1949, in Omaha, Nebraska, he is one of nine children and the grandson of Croatian immigrants. He was ordained a priest for the Archdiocese of Omaha in 1975. He was named bishop of Rapid City, South Dakota, in 1998. In 2010, he was appointed to Spokane. He speaks Spanish and lives at the seminary there.

He has degrees from what is now the University of St. Thomas in St. Paul, Minnesota, the Pontifical Gregorian University in Rome and The Catholic University of America in Washington.

He served as secretary at the apostolic nunciature in Washington and was pastor of two parishes in Omaha. On the national level, he currently chairs the U.S. bishops’ Subcommittee on Aid to the Church in Central and Eastern Europe and is former chair of the Committee for the Protection of Children and Young People.

Following Archbishop Cupich’s remarks at the Sept. 20 news conference, Cardinal Francis George told the media he is grateful to Pope Francis for accepting his resignation and is relieved.

“I’ve been a bishop for many years and before that I was a religious superior. And in a sense, in those jobs, as you can imagine, you are hostage to what hundreds even thousands of people do over which you have no control,” he said. Every morning he would check the news to find out what happened that he was accountable for. “I have to confess, it will be a relief not to read the paper with that vision in mind but just to get information.”

When reminded that he has frequently said it was his goal to retire and meet his successor, something not accomplished but any other archbishop of Chicago since all died in office, Cardinal George pumped his fist in the air and smiled.

He said the appointment is also a relief to him because of his health problems.

“Others who have retired I’ve asked them how it went and they’ve said, ‘Well, it’s strange. One moment you’re at the center of everything and the next moment you’re not.’ You have to adjust to that,” he said.

Cardinal George is the first native Chicagoan to serve as archbishop of Chicago. Born in 1937, he attended Catholic schools in Illinois before entering the Missionary Oblates of Mary Immaculate in 1957. He was ordained a priest Dec. 21, 1963. He was his order’s vicar general in Rome from 1974 to 1986.

He was bishop of Yakima, Washington, from 1990 to 1996 and archbishop of Portland in Oregon for less than a year before being Pope John Paul II named him archbishop of Chicago in 1997.

PREVIOUS: Despite 50 years of ‘War on Poverty,’ prosperity for many seems elusive