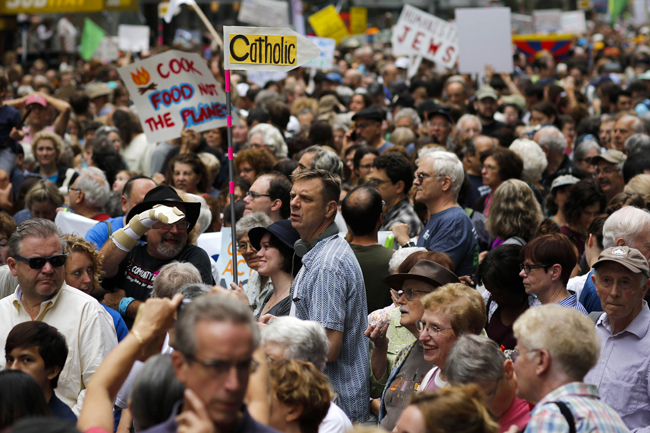 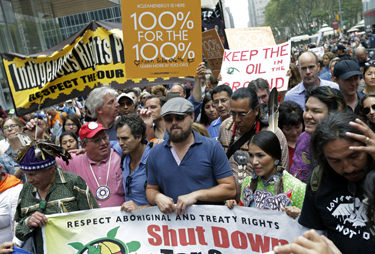 Organizers of the People’s Climate March estimated nearly 400,000 men, women and children rallied to the cause. Other estimates placed the number at around 300,000.

The spirited 2.2-mile march was the signature event of a weeklong series of demonstrations, seminars and prayer services to urge bold action by the participants in the U.N. Climate Summit Sept. 23. Secretary-General Ban Ki-moon invited government leaders and private-sector representatives to the ambitious summit to commit to substantial, replicable, concrete actions to reduce carbon emissions.

Marchers expressed fervent hope that the huge grass-roots turnout would send an unmistakable message to policymakers about widespread public concern over climate change.

“I hope this will draw the attention of global leaders at the U.N., so they will deliver effective steps to stop climate change and global warming at the international level. And I hope people will see how big the movement is and be energized,” Dominican Sister Arlene Flaherty said.

Sister Flaherty is director of Justice, Peace and Integrity of Creation for the School Sisters of Notre Dame and a justice promoter for the Dominican Sisters.

“Today is the day for the people to call for justice. People are taking back our power and voice on an issue that has become politicized,” said Mercy Sister Aine O’Connor, coordinator of Mercy Global Action at the U.N.

“As Mercy sisters, we have dedicated ourselves to the promise of life for persons rendered poor, sick and uneducated, and for our earth. The environment and life and justice connect to all of our concerns,” she said.

People and the earth have to be at the center of a model of global development, Sister O’Connor said. “We can’t make any progress on poverty if we don’t address the root causes of the climate change issue. Decisions are being made and driven by corporate interests that value growth at all costs,” she said.

“For Catholics, climate change is a profound spiritual, ethical and moral issue. It’s not about politics. It’s about our responsibility as God’s children to care for each other and future generations. As Christians, we have a moral obligation to provide leadership on climate change,” Patrick Carolan said.

He is executive director of Franciscan Action Network, one of 1,500 co-sponsors of the march and a coordinator for Catholic participants.

“We can’t just sit around and wait for the government to act. The solutions have to come from within us. When enough of us start acting, the government will act,” Carolan said.

The march organizers assigned participants to staging areas along streets intersecting a 30-block swath of Central Park West. They made loose designations, such as “Food and Water Justice,” “Mountaintop Removal Allies,” “Anti-Corporate Campaigns,” and “Nuclear Free, Carbon Free” and encouraged people to gather with like-minded demonstrators.

During the hot, humid, three-hour wait to step off into the march, good-humored participants were led in song, prayer and meditation by a changing array of faith leaders, including Dominican Sister Patricia Daly, executive director of the Tri-State Coalition for Responsible Investment.

Musicians sang and used drums, guitars, a bass, tambourines and a bagpipe. People in the crowd responded with cow bells, rhythmic clapping, a chorus of synchronized shofars and throaty Amens. When Peter Yarrow, of Peter, Paul and Mary fame, stepped to the microphone to lead “Where Have All the Flowers Gone?” it was easy to see the event’s similarity to the anti-war rallies of an earlier decade.

At the barricaded entrance to the block, a large wooden ark was parked on a parade float, adjacent to an inflatable mosque. Muslims used the area between the two for their midday prayer.

The ark was built by an interfaith group led by Auburn Theological Seminary in New York. The Rev. Mark Hostetter, chairman of the board of the Presbyterian seminary, said: “The ark is a great representation of our stewardship of the earth.” Visitors to the ark were given organic, preservative-free oatmeal animal crackers as they departed.

Christina Leano and Steffano Montano brought their toddler, Malaya Clare, to the march from Miami. The parents work at Barry University, which was founded by the Dominican sisters of Adrian, Michigan.

“This is an expression of our faith, honoring the dignity of creation,” Leano said. She said her family is from the Philippines, where climate change is creating typhoons. “It’s also a justice issue, because climate change is mostly caused by people in the First World, yet the effect is greatest in developing countries where people do not have control or a voice.”

Sister Carol DeAngelo said the ongoing challenge with the climate change issue is to figure, “How do I live this in my own life? How do I bring it to my prayer? And how do I speak as a Catholic, a Sister of Charity and a person of faith about the need to be concerned and act now?”

Sister DeAngelo is director of Peace, Justice and Integrity of Creation for her community, the Sisters of Charity of New York.

She noted the strong Catholic presence at the march and said she was grateful that Cardinal Timothy M. Dolan of New York used his Sept. 16 blog post to invite Catholics to march as an indication of their prayerful support of God’s creation.

The Catholic groups included Maryknoll Fathers and Sisters, Franciscans, Dominicans, Ursulines, Sisters of Charity, Sisters of Divine Compassion, and students from high schools and colleges associated with them.

“College students don’t generally think it’s possible for their voices to be heard,” said Cara Weidinger, president of Students for Global Justice at St. John’s University in Queens. “We’re empowering them to make small changes in their lives to impact the larger community. This year, we’re focused on fair trade coffee, so they see that their purchase of a cup of coffee can help recognize the humanity of dignity of each person who produces it and receives a fair wage.”