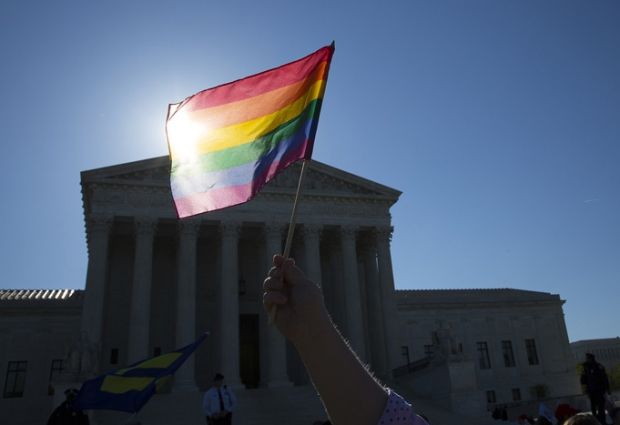 A supporter for same-sex marriage stands outside the U.S. Supreme Court on April 28 in Washington. (CNS/Tyler Orsburn)

“The nature of marriage is that, through its enduring bond, two persons together can find other freedoms, such as expression, intimacy, and spirituality,” wrote Justice Anthony Kennedy for the 5-4 majority. “This is true for all persons, whatever their sexual orientation.”

As of June 26, 36 states, the District of Columbia and Guam allowed same-sex marriage. Some of those states passed laws allowing it, while others have done so under court ruling.

Shortly after the opinion was announced, Kentucky Gov. Steven Beshear ordered county clerks to immediately begin issuing marriage licenses to same-sex couples who seek them. The Associated Press reported that same-sex couples in some jurisdictions in Georgia, Texas, Arkansas, Ohio, Michigan, South Dakota, and Nebraska already were being married.

The four justices who dissented from the ruling included warnings about dire consequences for the nation, ranging from “a threat to American democracy” to future battles the court will have to settle over how religious institutions may apply faith-based opposition to such marriages in day-to-day functions in society.

The main opinion recognized in several places the role of religious beliefs in the questions surrounding same-sex marriage. Kennedy said toward the conclusion of his 28-page opinion that “it must be emphasized that religions, and those who adhere to religious doctrines, may continue to advocate with utmost, sincere conviction that, by divine precepts, same-sex marriage should not be condoned.”

The First Amendment ensures protection for religious organizations and individuals as they seek to teach the principles “that are so fulfilling and so central to their lives and faiths,” he continued, and to “their own deep aspirations to continue the family structure they have long revered. The same is true of those who oppose same-sex marriage for other reasons.

“In turn, those who believe allowing same-sex marriage is proper or indeed essential, whether as a matter of religious conviction or secular belief, may engage those who disagree with their view in an open and searching debate. The Constitution, however, does not permit the state to bar same-sex couples from marriage on the same terms as accorded to couples of the opposite sex.”

The court walked through how laws pertaining to marriage have changed over the centuries, notably referring to 20th century prohibitions on marriage between people of different races, and laws that treated a woman as legally subject to the will of her husband.

It also talked about a variety of ways in which the status of state-recognized marriage affects couples, their children and society.

Kennedy cited evidence to the court about the loving, supportive families that can be formed by gays and lesbians and said: “Excluding same-sex couples from marriage thus conflicts with a central premise of the right to marry. Without the recognition, stability and predictability marriage offers, their children suffer the stigma of knowing their families are somehow lesser. They also suffer the significant material costs of being raised by unmarried parents, relegated through no fault of their own to a more difficult and uncertain family life. The marriage laws at issue here thus harm and humiliate the children of same-sex couples.”

He said that “many who deem same-sex marriage to be wrong reach that conclusion based on decent and honorable religious or philosophical premises, and neither they nor their beliefs are disparaged here.”

However, he added, “when that sincere, personal opposition becomes enacted law and public policy, the necessary consequence is to put the imprimatur of the state itself on an exclusion that soon demeans or stigmatizes those whose own liberty is then denied. Under the Constitution, same-sex couples seek in marriage the same legal treatment as opposite-sex couples, and it would disparage their choices and diminish their personhood to deny them this right.”

Obergefell v. Hodges bundled four cases out of the 6th U.S. Circuit Court of Appeals, from Tennessee, Michigan, Kentucky and Ohio, each of which had limited marriage to heterosexual couples. The circuit court had upheld the state prohibitions on same-sex couples being entitled to marry.

The plaintiffs who sued raised a variety of issues that affected them. James Obergefell, for whom the case is titled, sued after the state of Ohio refused to list him as the surviving spouse on the death certificate of John Arthur, who he married in Maryland. A Michigan couple sued after they were denied the right to jointly adopt the children they are raising together. Two other cases challenged Tennessee’s and Kentucky’s refusal to recognize marriages from other jurisdictions.

The four justices who dissented in the ruling did so with vehemence. Each wrote a separate dissent, with different combinations of the four signing onto each others’ opinions.

Chief Justice John Roberts, joined by Justices Antonin Scalia and Clarence Thomas, focused primarily on the argument that the court was acting precipitously, ruling on a matter that the states were still considering.

“Whether same-sex marriage is a good idea should be of no concern to us,” Roberts wrote. “Under the Constitution, judges have power to say what the law is, not what it should be. The people who ratified the Constitution authorized courts to exercise ‘neither force nor will but merely judgment.'”

Roberts went on to say that “although the policy arguments for extending marriage to same-sex couples may be compelling, the legal arguments for requiring such an extension are not. The fundamental right to marry does not include a right to make a state change its definition of marriage. And a state’s decision to maintain the meaning of marriage that has persisted in every culture throughout human history can hardly be called irrational. In short, our Constitution does not enact any one theory of marriage. The people of a state are free to expand marriage to include same-sex couples, or to retain the historic definition.”

Roberts also responded to the majority’s references to the religious rights of those who disagree with same-sex marriage, saying it “creates serious questions about religious liberty. Many good and decent people oppose same-sex marriage as a tenet of faith, and their freedom to exercise religion is — unlike the right imagined by the majority — actually spelled out in the Constitution.” He noted that every state that “adopted same-sex marriage democratically” included accommodations for religious practice.

“The majority’s decision imposing same-sex marriage cannot, of course, create any such accommodations,” Roberts wrote. “The majority graciously suggests that religious believers may continue to ‘advocate’ and ‘teach’ their views of marriage. The First Amendment guarantees, however, the freedom to ‘exercise’ religion. Ominously, that is not a word the majority uses. Hard questions arise when people of faith exercise religion in ways that may be seen to conflict with the new right to same-sex marriage.”

He listed, as possible areas of conflict, when “a religious college provides married student housing only to opposite-sex married couples, or a religious adoption agency declines to place children with same-sex married couples.” At the oral argument for the cases in April, Roberts noted, Solicitor General Donald B. Verrilli Jr. “candidly acknowledged that the tax exemptions of some religious institutions would be in question if they opposed same-sex marriage.”

Roberts said there is little doubt such questions will be before the court soon.

“Unfortunately, people of faith can take no comfort in the treatment they receive from the majority today,” he said.

Scalia in typically colorful terminology, said “what really astounds is the hubris reflected in today’s judicial putsch” that he also defined as a “threat to American democracy.” In finding a 14th Amendment right to marriage by same-sex couples, he wrote in a brief joined by Thomas, the majority concluded “that every state violated the Constitution for all of the 135 years between the 14th Amendment’s ratification and Massachusetts’ permitting of same-sex marriages in 2003. They have discovered in the 14th Amendment a ‘fundamental right’ overlooked by every person alive at the time of ratification, and almost everyone else in the time since.”

Thomas, in his dissent, which was joined by Scalia, said the parties who sued “cannot claim, under the most plausible definition of ‘liberty’ that they have been imprisoned or physically restrained by the states for participating in same-sex relationships. To the contrary, they have been able to cohabitate and raise their children in peace” and been able to hold marriage ceremonies in states that recognize them. They also have been able to travel freely, making homes where they please and have not been incarcerated or physically restrained, he said. “Petitioners have been left alone to order their lives as they see fit.”