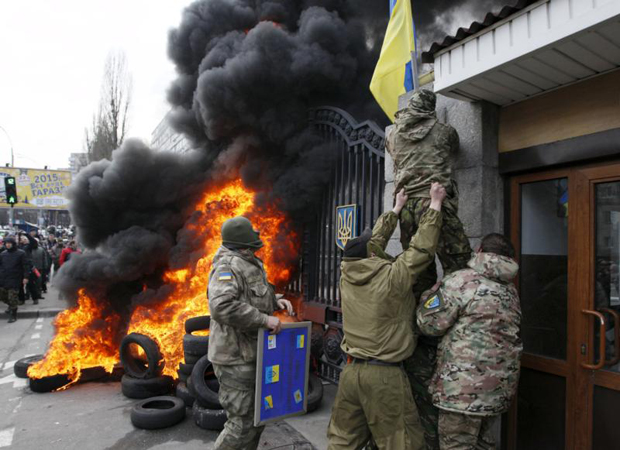 Servicemen from the Aydar battalion throw a Ukrainian flag from the building of Ukraine's Defense Ministry in Kiev during a protest against the disbanding of the battalion in this Feb. 2 file photo. (CNS photo/Valentyn Ogirenko, Reuters)

WARSAW, Poland (CNS) — A Ukrainian bishop said a Russian-backed separatist rebellion has plunged his country into its worst humanitarian crisis since World War II and warned that “millions of refugees” could soon head for Europe to escape starvation.

“Huge numbers are now caught between hammer and anvil; the separatists aren’t looking after them, and the Ukrainian government won’t care for them because they haven’t declared which side they’re on,” said Auxiliary Bishop Jan Sobilo of Kharkiv-Zaporizhia.

“Not since World War II have we seen such poverty and destitution,” he told CNS July 29.

“People are continually arriving at our Catholic communities asking for food, medicines, money and shelter,” he said, noting they included young widows with small children, whose husbands have stayed in the war zone or been killed.

The bishop spoke as the Catholic Caritas organization also warned of growing starvation and desperation in separatist-controlled eastern Ukraine.

Bishop Sobilo told CNS lack of water currently posed the biggest problem in eastern Ukraine, where food prices were three times higher than in the rest of the country.

He added that local children would be unable to start the new school year because most schools were closed and said the Ukrainian authorities had hushed up a spiraling rate of suicides.

“Whereas family members and friends were ready to help for a month or two, most have now exhausted their money and savings and had to ask the refugees to move on,” Bishop Sobilo told CNS.

“Many elderly educated people, who previously had jobs, have been unable to face begging on the streets and have thrown themselves from windows and bridges. Such people often have no means of survival and no one to turn to, and have ended up starving.”

Although Russian President Vladimir Putin has repeatedly denied direct Russian involvement in Ukraine, church leaders repeatedly have accused Moscow of military intervention in the war. A June United Nations report said more than 6,400 people have died and 16,000 have been wounded.

In a July 28 interview with Germany’s Cologne-based Dom Radio, Andrij Waskowycz, president of Caritas Ukraine, said 700,000 Ukrainians had now left the country, while 1.4 million more were internally displaced by the fighting and lacked basic necessities.

He said a February cease-fire agreement had failed to prevent daily skirmishes and conflicts, adding that at least 100,000 people were now without water in the separatist-controlled Donetsk and Luhansk regions.

Bishop Sobilo told CNS church leaders had been promised access to Catholics by separatist forces, but had been barred from visiting the “occupied territories” by the Ukrainian troops controlling the makeshift borders.

He added that Western aid often failed to reach those in need and was “not always the right kind of help.” He said it was “more effective and less wasteful” for church donors to send money.

“This is a war of oligarchs, and any future peace will depend on the conversion of those oligarchs in Russia and Ukraine who’ve kept the conflict going with their lies,” the bishop said.

“The West should get ready to accept the millions of homeless, hungry refugees who will soon head across central and western Ukraine toward Europe,” he said. “Pope Francis has urged help for refugees from Africa, and we now have parts of Africa right here. Unless solidarity is shown with them, countless innocent people will die simply because they happened to live in an unlucky place during a conflict ignited by those with a personal interest in war and suffering.”