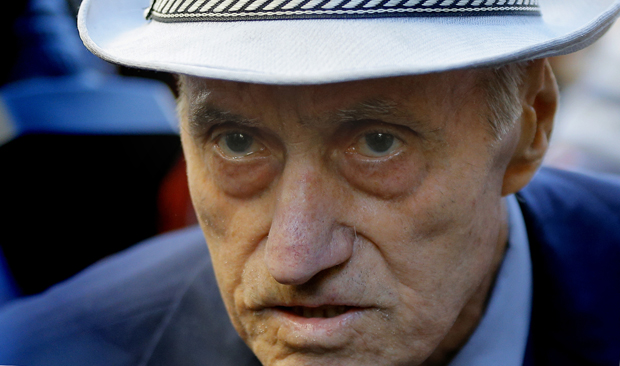 Although at least 600,000 Romanian citizens were thrown into prisons and labor camps under communist rule, Alexandru Visinescu, pictured in a 2014 photo, was the first former commandant sentenced for crimes against humanity. (CNS photo/Robert Ghement, Reuters) 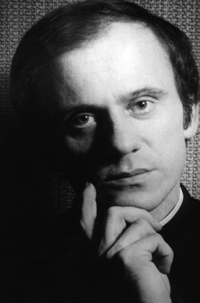 Blessed Jerzy Popieluszko, a Polish priest who was murdered by communist police agents in 1984, is pictured in an undated file photo. The secret police killers of Blessed Popieluszko, whose bound and gagged body was dredged from the Vistula River, were granted amnesty and released early, while repeated attempts have since failed to prosecute their top-level accomplices. (CNS file photo)

WARSAW, Poland (CNS) — When an 89-year-old Romanian was given a 20-year jail term this summer, the judgment made legal history.

Although at least 600,000 Romanian citizens were thrown into prisons and labor camps under communist rule, Alexandru Visinescu, who ran a prison in eastern Romania from 1956 to 1963, was the first former commander sentenced for crimes against humanity.

In the quarter-century since the collapse of communism, many once-persecuted Christians have wondered why justice has proved so elusive.

“I’m surprised how long it’s taken and deeply regret this sentence wasn’t passed when more of Visinescu’s victims were still alive,” said Archbishop Ioan Robu of Bucharest, president of the Romanian bishops’ conference. “I know priests who suffered in his prison and whose entitlement to justice hasn’t been met. To such people, this late condemnation offers no consolation.”

Although several Romanian communists were convicted of genocide in the 1990s, many were freed on health grounds, while most went unpunished.

Historians estimate the death toll from purges and repressions under communist rule in Eastern Europe, 1917-1991, at about 25 million. Many victims — including more than 420 Catholic priests executed or judicially murdered in Russia — were posthumously exonerated in the 1990s.

Prosecuting the persecutors, however, has proved difficult. Direct witnesses to communist atrocities are dying out, while documentation remains partial, often with no paper chain of arrest warrants and interrogation notes.

However, virtually all of the 331 cases listed on the Institute’s website have ended in suspended sentences or been discontinued, a record shown by equivalent bodies in Hungary, Slovakia and the Czech Republic.

The secret police killers of Poland’s Blessed Father Jerzy Popieluszko, whose bound and gagged body was dredged from the Vistula River in October 1984, were granted amnesty and released early, while repeated attempts have since failed to prosecute their top-level accomplices. The suspected murderers of three other priests in 1989 have been identified by researchers but never charged.

Romanian Catholic Bishop Virgil Bercea of Oradea told CNS Aug. 14: “If there’d been a clear condemnation of communism in the early 1990s, we could have released the ghosts of the past and offered proper recompense for the evils suffered. But when a presidential commission was set up here in 2006, it reported much too late, when most of those who’d been mistreated had died and there was little political will to act.”

Some Catholics think the church itself has been reluctant to push for investigations, particularly after revelations about its own past infiltration by agents and informers.

“If the party most affected shows no interest itself, it’s harder for others to do so — but there’s curiously little to suggest the church hierarchy has pressed for prosecutions,” Stepkowski told CNS.

“The memory of persecuted priests is still fresh in our society. But there’s now a bitter, widespread realization that most crimes will never be exposed,” he added.

The church has begun recognizing some of the communist martyrs, and Bishop Bercea thinks such gestures of recognition are essential.

His uncle, Cardinal Alexandru Todea (1912-2002), was barred from sitting on his own prison bed and almost froze to death.

While he never yielded to hatred or sought revenge, he believed the church had a duty to pray for its martyrs and remember the crimes committed against them.

“Although today’s civil society has a right and duty to demand justice for innocent people, it only shows an interest when the media revive a story,” Bishop Bercea told CNS. “But our martyrs will go on speaking beyond the grave and their voices won’t be suppressed. They’ll help ensure new monsters aren’t born from the sleep of history.”

Romania’s Interior Ministry began investigating the fate of persecuted Christians within months of the 1989 Winter Revolution, and the names of some communist-era victims are now recorded on memorials at the country’s prisons.

In 2003, the country’s churches drew up a ”National Christian Martyrology,” which included 200 Catholics, 120 Orthodox Christians and 20 Protestants, all killed out of ”hatred of faith and church.”

However, it took until 2013 to bring charges against Visinescu, whose prison in Ramnicu Sarat was known as the “prison of silence” because of its extensive use of solitary confinement.

Another prison boss, Ion Ficior, now faces trial for the deaths of 103 inmates at Periprava camp, while Romanian prosecutors are considering charges against 35 other former officials.

But Archbishop Robu said Christians should leave the iniquities of communism “in God’s hands,” rather than expecting temporal justice.

“Those who are well-informed about the past can go on demanding action against people who brought such evil into the world,” he told CNS. “But even if more sentences are handed down, they won’t diminish the sufferings. The evil has been done, and nothing can ever change this.

NEXT: Popemobile shipped to U.S. ahead of pope’s arrival