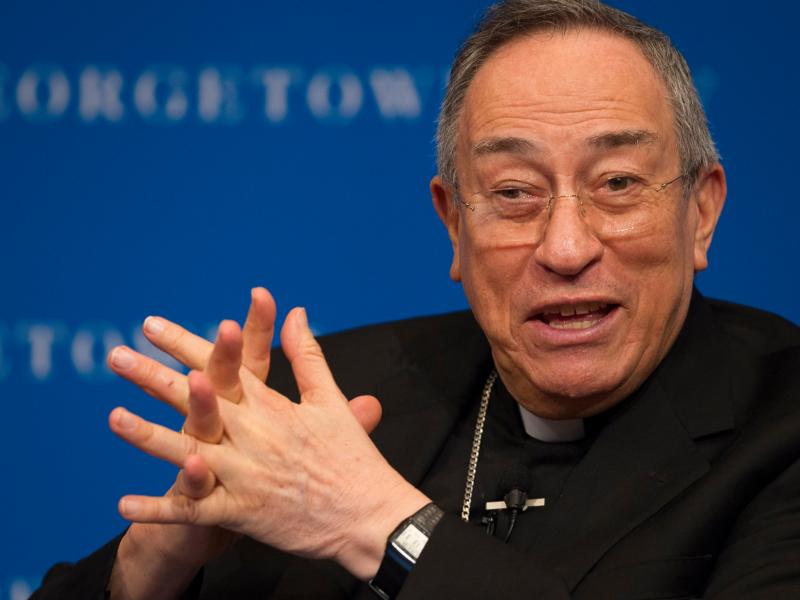 WASHINGTON (CNS) — People of developed nations share responsibility with the rest of the world to protect the earth from environmental destruction and assist poor communities in escaping poverty, a cardinal who is a chief adviser to the pope said.

Honduran Cardinal Oscar Rodriguez Maradiaga, coordinator of Pope Francis’ international nine-member Council of Cardinals, told reporters at a roundtable discussion that the pope calls people to dialogue in his recent encyclical on ecology so that better understanding occurs across country boundaries.

“As the pope said, it is not only thinking that the rich have to go to the poor, but how can each one of us, every one of us, take their own co-responsibility because all of us are responsible (for) our common home,” Cardinal Rodriguez said in reference to the encyclical’s title, “Laudato Si’, on Care for Our Common Home.”

“We cannot ignore that we are co-responsible for all around the world,” he continued. “We cannot be closed down in our own borders and looking only to our own places because all of us are citizens of the same earth and all of us have a common home.”

The cardinal met reporters for nearly an hour before he participated in a program on the encyclical, at the Georgetown University Law Center.

He focused largely on the encyclical’s central message: that it is time for a true revolution of heart in realizing that human beings must understand they are connected and that any action they undertake has implications for others as well as the planet.

Pope Francis stresses the importance of dialogue, which has been a mainstay of his papacy, the cardinal said.

“Dialogue is one of the keys for the solutions, and when you see from chapter 4 to the end of the encyclical, you see that the pope is always asking for dialogue, dialogue, dialogue; with different denominations within the religious aspect, with governments, with NGOs, with private foundations, dialogue with all kinds of people,” he explained.

Cardinal Rodriguez said the pope is calling for revolution, not in the political sense, but “a real revolution … to turn upside down, a change that is total.”

“We need a revolution in ecology under the ethical perspective, of course,” he said.

The encyclical, he said, is built on long-standing Catholic social teaching on human dignity.

The cardinal questioned the pope’s critics who suggested that the pontiff should limit his observations to theological questions rather than economic and scientific issues, especially those surrounding the climate, even before the encyclical was released.

“It (the encyclical) was criticized before being published. People said, ‘What does the Holy Father know about science?’ It’s not about science. It’s about life,” Cardinal Rodriguez said.

“It’s what we used to call justice with the creation. What we have to do is be just with the creation, with this treasure that was given to the human being. It’s to be preserved and cultivated, not destroyed.”

Acknowledging that resistance to the encyclical’s call for action to protect the environment and for a change in the human heart will continue, Cardinal Rodriguez simply said the world “cannot continue ignoring” climate change. He added that he feels confident that a comprehensive agreement to address climate change will emerge from the U.N. Framework Convention on Climate Change meeting in Paris Nov. 30-Dec. 11.

“Otherwise, I don’t think countries will have a future,” he said.

The cardinal also called on the energy industry to abandon carbon-based fuels and to embrace alternative energy. He also supported efforts by various institutions, including Catholic colleges and universities, to divest from fossil fuels.

“Oil is like roulette now, a raffle,” he said. “To trust in only one kind of industry in energy is a big mistake. Every day it’s more clear.

“Secondly, the market is not a god and this is one of the criticisms that the encyclical makes: Market is an instrument for development, but not for making money only. This is one of the perspectives that the world has to learn.”

Cardinal Rodriguez held up entrepreneurs pursuing alternative fuels and whose business model is based on the development of people.

The encyclical also has a message for elected officials everywhere, he said, who must be more responsive to the development of people rather than focusing on their next election or maintaining power.

During the public program Cardinal Rodriguez stressed the urgency that the encyclical be shared within parishes, schools and other settings. He called on parishioners to step up to bring the message of “Laudato Si'” to their faith communities if their pastors and bishops are not.

Bishops also must step up to motivate pastors to make sure the encyclical is being discussed in parishes, he added.

Responders to the cardinal — Edith Brown Weiss, professor international law at Georgetown, and John Podesta, distinguished visitor from the practice of law at the university — concurred that the encyclical is a siren call to the world to respond to climate change because the planet is home to the human race.

The program was co-sponsored by several Georgetown programs including the Initiative on Catholic Social Thought & Public Life, the Environmental Law Program, the Climate Change Center and the Global Futures Initiative.

PREVIOUS: Those who give their lives in service are not losers, pope says