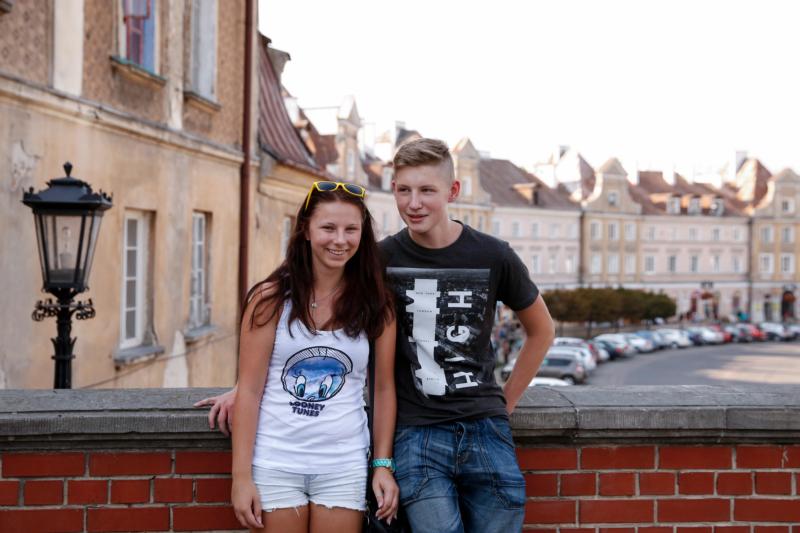 Young people pose for a photo on a bridge leading into the old town section of Lublin, Poland, Aug. 31. (CNS photo/Nancy Wiechec)

LUBLIN, Poland (CNS) — Agnieszka Styczen, 27, is beginning her career as a doctor, yet for months nearly all of her free time has been devoted to helping organize Days in the Diocese in the Archdiocese of Lublin.

Days in the Diocese invites World Youth Day pilgrims for an immersion experience the week ahead of the international gathering. All of Poland’s 42 dioceses, except for the Archdiocese of Krakow, will host pilgrims days before World Youth Day kicks off in Krakow July 25.

Days in the Diocese are designed for those from other countries to get to know the host country, its young people and the local church.

Lublin will welcome up to 7,000 pilgrims, mostly from Belgium, France, Brazil and a few other South American countries.

“We are prepared to get to know other cultures … the way others live, their lifestyles, their attitudes toward the modern world,” Styczen told Catholic News Service. But mostly, she said, it’s the chance for Catholic youths to forge new connections.

“Our main expectations are spiritual ones,” she said. “We are going to share our faith, share our joy of being the students of Jesus Christ.”

Styczen said Polish young people want to be examples of joyous Christians to the hundreds of thousands of people expected for World Youth Day.

“We want to express that nothing is more important than believing in Jesus Christ, especially in these modern times, in a time of secularization,” she said.

About 90 percent of Lublin’s population is Catholic, but Styczen and other Catholic leaders said Polish youths are struggling to keep faith part of personal and public life.

The archdiocese’s preparations have included festive public events to promote participation in World Youth Day. Styczen said they are occasions to draw interest and chat with people passing by.

Pilgrims arriving in Lublin for the Days in the Diocese will find a city that is quite youthful. The city boasts five public universities, including the John Paul II Catholic University of Lublin, known as KUL. During the school year, university students make up nearly one-third of Lublin’s population.

The largest city in eastern Poland, Lublin is rich in history. For seven centuries, it has been at a crossroads of trade and culture.

The Days in the Diocese program offers pilgrims a choice of four separate sightseeing tours. One traces the footsteps of St. John Paul II, with an opportunity to visit the classroom where the Polish pontiff lectured at KUL. Another features city landmarks, including Lublin’s medieval castle and its Chapel of the Holy Trinity, showcasing a rare mix of Eastern and Western architecture and art and cherished frescoes.

There will be Masses and engagements with local parishes, a Polish language and culture workshop and outdoor recreational opportunities.

Keeping with the World Youth Day theme, “Blessed are the merciful, for they will receive mercy,” pilgrims in Lublin will spend time in service. They will meet and assist children and adults in need, people with disabilities, refugees and the homeless.

Concluding the Days in the Diocese will be a pilgrims’ procession through the city followed by Mass with Archbishop Stanislaw Budzik and a folklore festival.

Styczen said plans are coming along well and pilgrims can expect a remarkable visit.

“We have prepared perfectly for (this) huge event, to build an atmosphere of a memorable time.”

She added that the international gathering is less about age and more about spirit.

“It’s not a matter of age,” she said. “It’s a matter of the age of your spirit. So everyone who wants to participate in World Youth Day has to feel free to do that. Everyone is invited.”