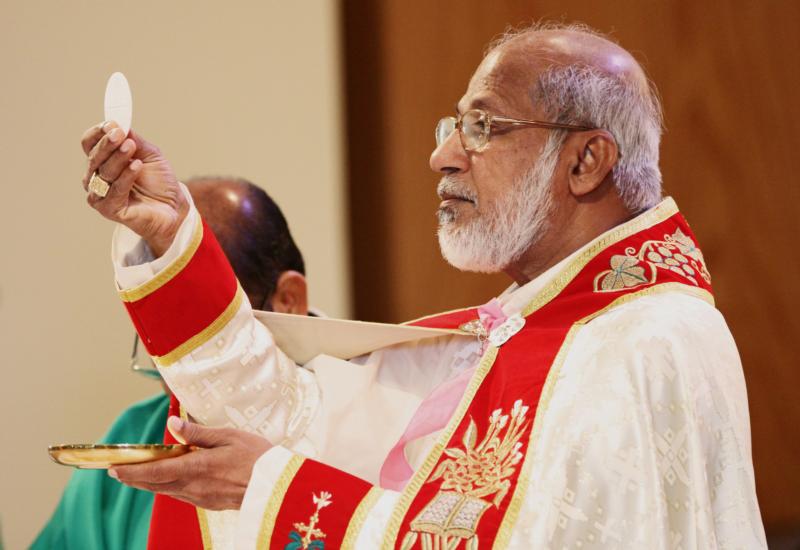 Cardinal George Alencherry of India, major archbishop of the Syro-Malabar Catholic Church, elevates the Eucharist during Mass in 2012 at Resurrection Church in Farmingville, N.Y. The Eucharist is not just a reward for the good, but also strength for the weak and nourishment for those who hunger for love, forgiveness and mercy, Pope Francis said. (CNS photo/Gregory A. Shemitz, Long Island Catholic)

VATICAN CITY (CNS) — The Eucharist is not just a reward for the good, but also strength for the weak and nourishment for those who hunger for love, forgiveness and mercy, Pope Francis said.

“This hunger can be satiated only by the bread that comes from above. Jesus himself is the living bread that gives life to the world,” the pope said in a message to participants of the National Eucharistic Congress in Mumbai, India, Nov. 12-15.

The pope said the congress’ theme, “Nourished by the Eucharist to Nourish Others,” was “very relevant” and served as a reminder that people suffer from a spiritual hunger that can be satisfied only by “the bread that comes from above.”

The sacrament of the Eucharist, he stressed, also “leads us to solidarity” with those in need; those who partake of Christ’s body and blood cannot remain idle when seeing others suffering want and hunger.

Pope Francis expressed his hope that the National Eucharistic Congress may serve as “a beacon of light” to the people of India and an occasion for them to “come together in unity and love.”

NEXT: Laity are disciples, not ‘second-class members’ of church, pope says