Scourge of human trafficking slowly moving out of the shadows 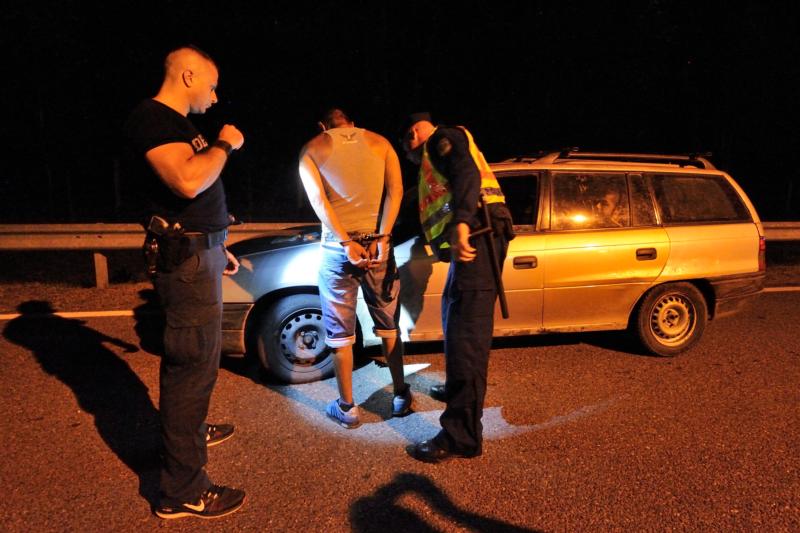 An alleged human trafficker is searched by a police officer in 2015 in neaer Budapest, Hungary. The United Nations' International Labor Organization estimates the number of humans being trafficked in the United States, Canada and the European Union at somewhere between 1.5 million and 2 million. (CNS photo/Zoltan Gergely Kelemen, EPA)

WASHINGTON (CNS) — Even though slavery has been off the books in the United States for more than 150 years, the practice still exists in this country — and elsewhere.

Precise numbers are tough to document, but the United Nations’ International Labor Organization estimates the number of humans being trafficked in the United States, Canada and the European Union at somewhere between 1.5 million and 2 million.

And that is just a small fraction of the International Labor Organization’s estimated worldwide figure, now at 20.9 million and climbing — close to 3 percent of the world’s population.

Catholic and religious organizations, as well as the federal government — and the government and the Catholic Church working jointly on a couple of fronts — are trying to put a dent in a troublesome global issue that thrives on working in the shadows.

Rep. Chris Smith, R-New Jersey, the principal author of the Trafficking Victims Protection Act of 2000, lauded the recent congressional passage of the International Megan’s Law by the House and Senate.

The new bill, he said in a Feb. 7 Washington Post op-ed essay, “authorizes the creation of a comprehensive, reciprocal notification system between U.S. and foreign law enforcement regarding the travels of those required by law to be on government sex-offender registries.”

Smith cited a 2010 Government Accountability Office report that said “at least 4,500 U.S. passports were issued to registered sex offenders in fiscal 2008 alone. Typically, a passport is valid for 10 years, meaning that currently tens of thousands of offenders could be traveling abroad as child-sex tourists.”

He said the International Megan’s Law will work in conjunction with the 2000 law — which has been reauthorized several times since its original passage. That law seeks to stem both sex trafficking and labor trafficking both in the United States and abroad.

The U.S. bishops’ Migration and Refugee Services has two grants from Cabinet agencies, according to Christopher Ljungquist, MRS coordinator of national outreach and education coordinator in its anti-trafficking department.

One, through the Department of Health and Human Services, provides direct services to U.S.-based human trafficking victims through the national Catholic Charities network.

The other grant, recently awarded through the State Department, is “essentially to create and document everything that the Catholic Church is doing worldwide in the area of maritime human trafficking,” Ljungquist said. “Stella Maris chaplaincies can work at identifying maritime human trafficking. We will be creating an online e-learning platform in which Catholic or non-Catholic actors worldwide will be able to download resources. It works on the iPhone or the iPad. “That way we’ll be able to … share best practices.”

Church groups with investment portfolios also lend aid in the effort against human trafficking. Sometimes it’s with the power of persuasion behind the dollars they marshal, and sometimes it’s with direct action.

The Interfaith Center on Corporate Responsibility has a program called Celebration Without Exploitation. “We really set that up as a result of work that the ICCR staff and members had done over the years starting with the Super Bowl the last four or five years,” said David Schilling, an ICCR senior program director working on human rights, human trafficking, modern slavery issues and global supply chain work.

“Our role as a national staff that works with its members is to help in terms of organizing. But the organizing has been done in the areas where the Super Bowl is,” Schilling said. “There was a tremendous amount of work done with the Tri-State Coalition on Responsible Investment” — which has 20-25 Catholic members — “with anti-trafficking coalitions in New Jersey and did a superior job” when the Super Bowl was held at MetLife Stadium in February 2014.

For this year’s Super Bowl, held Feb. 7 in Santa Clara, California, a coalition of nine women’s religious orders in the San Francisco Bay worked over the past six months, leaving fliers and posters in almost 300 area hotels, publicizing the warning signs that indicate someone might be a human trafficking victim, according to Catholic San Francisco, the archdiocesan newspaper.

Some signs include a traveler who pays in cash one day at a time; a hotel guest escorts various men into his room; or someone who is rarely left alone has little control of his or her own money and identification.

Coalition members also advised hotel managers, security and housekeeping staff on how to address trafficking if they suspect it’s taking place in their buildings. The coalition also pledged to stay active year-round, as San Francisco is considered a major hub for human trafficking

Foundations and Donors Interested in Catholic Activities, a consortium of Catholic nonprofits commonly called FADICA, has established its own human trafficking affinity group with roughly a dozen member organizations working against the practice, according to FADICA spokeswoman Lauren Traskey.

“They are involved in efforts to end trafficking, support victims and survivors — such as through the funding of safe houses — and raise public awareness through independent funding initiatives,” Traskey said in an email to Catholic News Service. “This group has really been inspired by Pope Francis’ commitment to eradicating human trafficking, which led to joining together alongside the Pontifical Academy of Sciences to support two youth symposia at the Vatican enabling youth delegates to fight modern slavery and raise global awareness about human trafficking.”

MRS’ Ljungquist said one nettlesome problem is that much trafficking takes place within the immigrant community, with people working in indentured servitude-like conditions as housekeepers or farmworkers for other members of their own ethnic group. “There is a fear of their own marginal status under U.S. law,” he added, noting that their oppressors have been “indoctrinating them into thinking that they’re benefiting from the trafficking situation.”

ICCR’s Schilling said more work can be done on the legislative front. ” We were strong exponents and supporters of the California supply chain transparency (law) requiring any company doing business in California and having sales of $100 million or more to put on their website what they’re going to do to combat human trafficking in their supply chain,” he said. “Last year the Modern Slavery Law was passed by the UK parliament requiring transparency. You don’t have to be UK-based to have to report.”

A similar bill in Congress, the Business Supply Chain Transparency on Trafficking and Slavery Act of 2015, has nine House co-sponsors, and the Senate version has just four. Both were referred to committee last summer, where they languish.

NEXT: Scalia dies at 79; was longest-serving justice on current Supreme Court