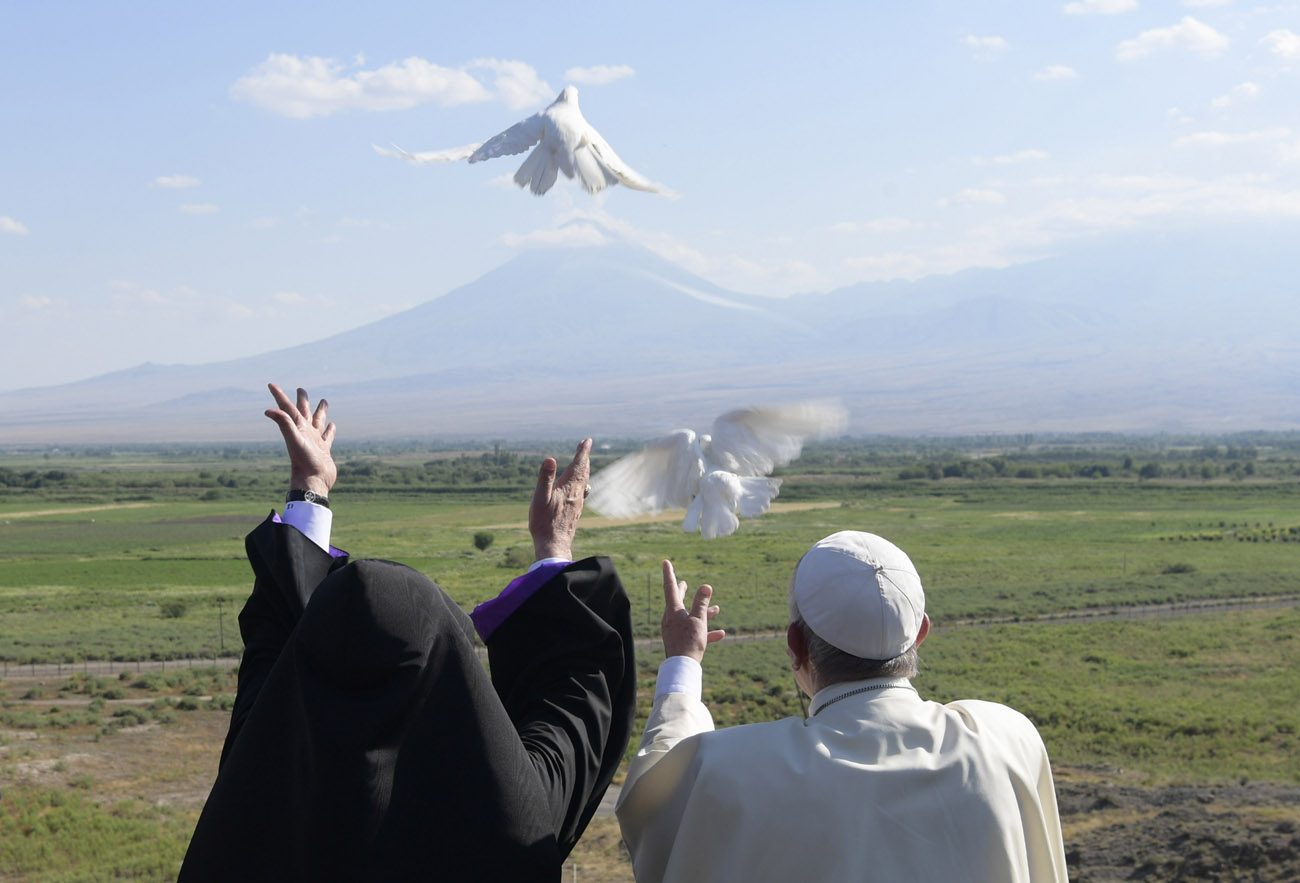 Pope Francis and Catholicos Karekin II, patriarch of the Armenian Apostolic Church, release doves from the Khor Virap monastery near Lusarat village in Armenia June 26. In the background is Mount Ararat, believed to be where Noah's Ark came to rest. (CNS photo/L'Osservatore Romano, handout)

The pope and the Oriental Orthodox patriarch signed their joint declaration at the end of Pope Francis’ June 24-26 visit to Armenia.

Earlier in the day, at an Armenian Divine Liturgy, both had spoken of their unity as believers in Christ and of their conviction that Christians are called by God to assist the poor, the persecuted and the needy.

While their joint declaration mentioned the progress made in the official Catholic-Oriental Orthodox theological dialogue and their hopes for its continuation, the heart of the text focused on common Christian action to relieve suffering.

“We are witnessing an immense tragedy unfolding before our eyes,” the two leaders said. “Countless innocent people” are “being killed, displaced or forced into a painful and uncertain exile by continuing conflicts on ethnic, economic, political and religious grounds in the Middle East and other parts of the world.”

“Religious and ethnic minorities have become the target of persecution and cruel treatment to the point that suffering for one’s religious belief has become a daily reality,” they said.

The Christians being martyred for their faith belong to different churches and their suffering “is an ‘ecumenism of blood,’ which transcends the historical divisions between Christians.”

The two leaders prayed that the terrorists waging war on Christians and other minorities would convert, and they also prayed that “those who are in a position to stop the violence” would hasten to do so.

“We implore the leaders of nations to listen to the plea of millions of human beings who long for peace and justice in the world, who demand respect for their God-given rights, who have urgent need of bread, not guns,” the declaration said.

The two denounced the use of a religion “to justify the spread of hatred, discrimination and violence.”

While focused on the headline-grabbing war in Syria, the two leaders did not ignore the tensions between Armenia and Azerbaijan over Nagorno-Karabakh, an enclave in Azerbaijan where the majority of people are ethnic Armenians and had voted for independence. The joint declaration urged “a peaceful resolution” of the conflict.

“We ask the faithful of our churches to open their hearts and hands to the victims of war and terrorism, to refugees and their families,” they said. The Christian faith demands concrete acts of charity, Pope Francis and Catholicos Karekin insisted.

Looking at the spread of secularization, the pope and patriarch noted how heavily cultural change is impacting the family. “The Armenian Apostolic Church and the Catholic Church share the same vision of the family, based on marriage, an act of freely given and faithful love between man and woman,” they said.

PREVIOUS: Be known for your love, pope tells people of Armenia