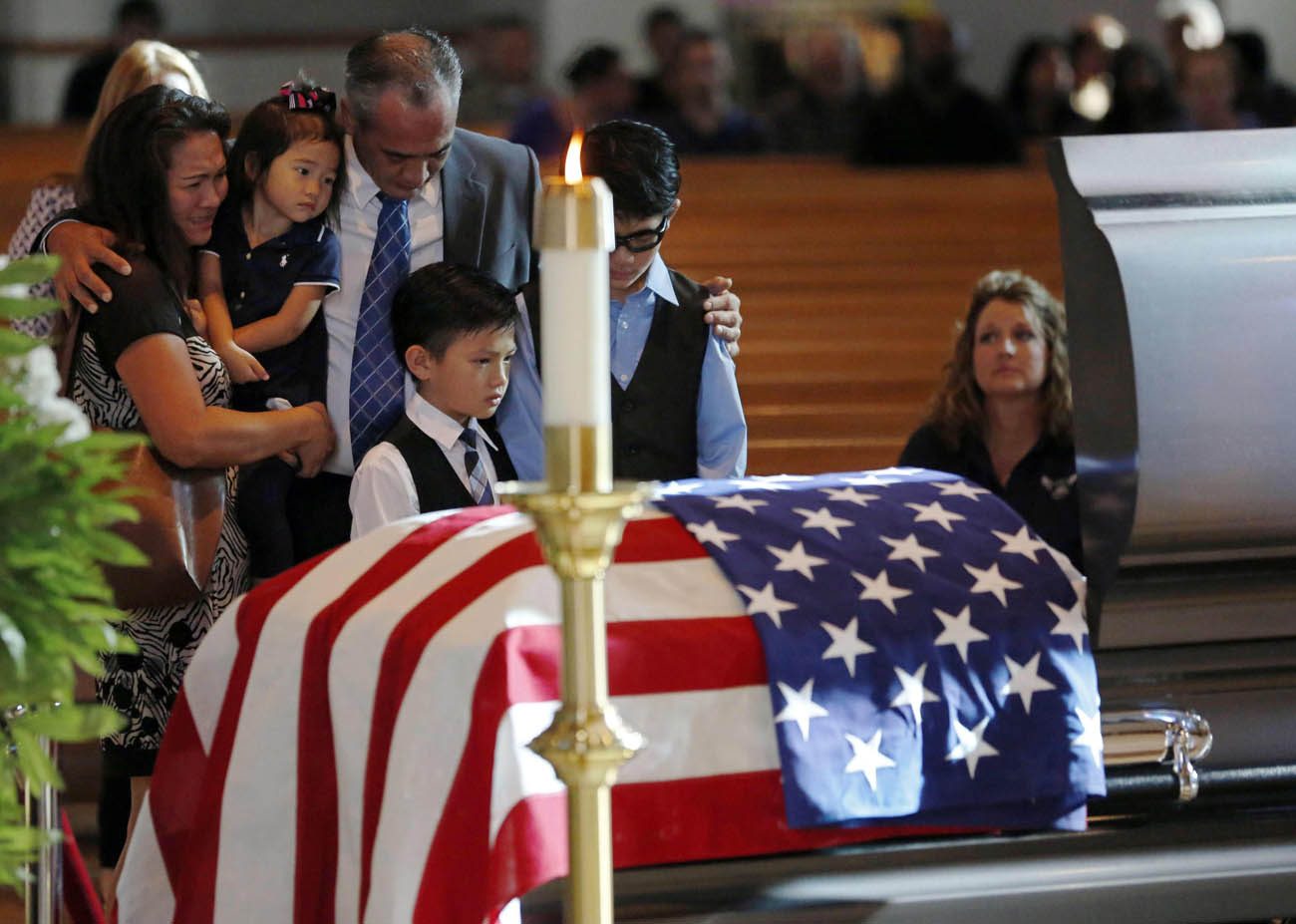 Billy Smith, brother of slain Dallas Police Sgt. Michael Smith, and his family grieve at the officer's casket during a July 12 visitation for him at Mary Immaculate Catholic Church in Farmers Branch, Texas. Smith, a member of the parish, was one of five officers killed when a gunman opened fire at a July 7 protest in downtown Dallas. (CNS photo/G.J. McCarthy, The Dallas Morning News pool via Reuters)

The gunman, Micah Xavier Johnson, 25, described by police as angry and deranged, held police at a standoff for several hours, admitting that he was targeting white police officers and that explosives were planted in the area. The heavily armed gunman was killed by police using an explosive device attached to a bomb squad robot.

In the week since the tragedy — the worst for Dallas law enforcement and the worst for U.S. law enforcement since 9/11 — city and interfaith leaders have asked for peace and prayer and solutions to violence plaguing the country. The police chief has asked that the community thank and support police.

President Barack Obama, who came to Dallas for a memorial, held up the city’s leadership as an example to others across the country and asked that Americans look at the root cause of violence.

Hundreds of police officers from across the country joined families in mourning their brother officers.

At Mary Immaculate Catholic Church in Farmers Branch, just north of Dallas, more than 1,000 people stood in line July 12 for more than an hour, including Dallas Mayor Mike Rawlings and Police Chief David O. Brown, waiting to pay their final respects to Smith.

Smith’s wife, Heidi, is a fourth-grade teacher at the parish school. His oldest daughter Victoria recently graduated from the school’s eighth grade and youngest daughter Caroline will be entering fourth grade at the school next fall.

As the crowds thinned after 10 p.m., members of other honor guards from across the country joined in the ceremony of paying last respects. 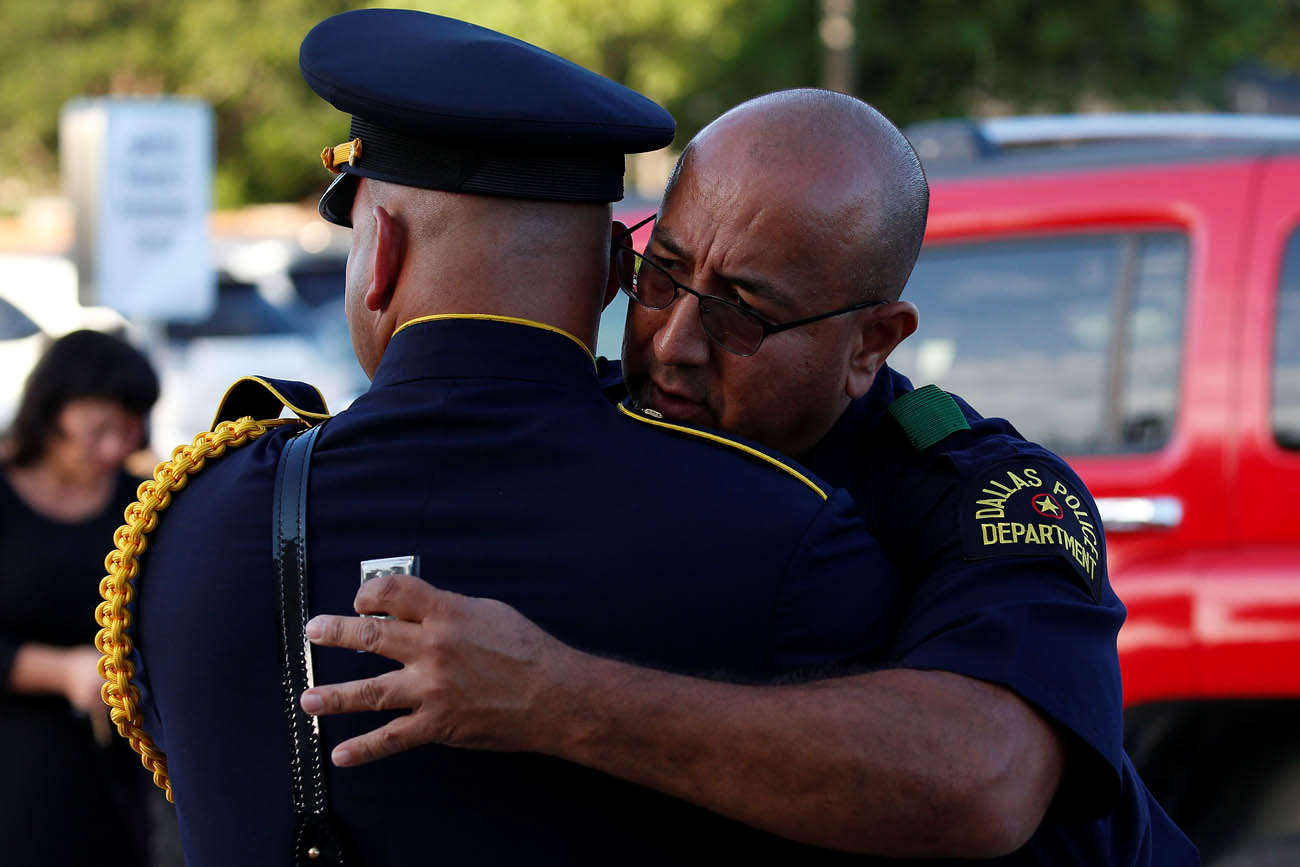 Then the duty fell on two officers, who stood by the body in shifts, through the overnight hours, ensuring that their beloved officer would not be left alone. As sunlight peered through the stained-glassed windows shortly after daybreak, the officers were still there and remained with the casket as the American flag that covered it was substituted for the burial pall to begin the Mass.

In his homily, Father Michael Forge, the pastor at Mary Immaculate Catholic Church, described the early morning hours at Parkland Hospital after the shooting, as he waited with the family to see their loved one’s body. He said there were countless police officers streaming through the room, offering words of encouragement and condolences.

“Now at one moment in that small and segregated waiting room, when there was a lull in the activity of people coming and going, Heidi asked little Caroline if she wanted to ask me her question,” Father Forge said. “She paused a bit, and seemed a little embarrassed, but then Caroline asked me: ‘Why did God do this?’

“I immediately answered and said: ‘Oh Caroline, God didn’t do this. The anti-God did this, the evil one did this,'” he said.

“Then a little while later Heidi shared with us that before Mike left for his shift that evening, he told Caroline to kiss him goodbye like it was his last time!” Father Forge said. “I immediately looked at Caroline and said, ‘Caroline, now God did that! That was God!'”

In her eulogy, Smith’s sister, Yea-Mei Sauer, talked about a brother who even in his youth was a role model to her and to her other brother, William, well into middle age. She said he loved his family and his family of police officers and he always wanted the best for them. And for his country.

“He believed in the service to his country and his community,” she said. “All this would make him uncomfortable, angry with me, all of us, bringing the attention to him.

“Michael was my role model, my first mentor,” she added. “Michael was a man of action. My brother’s murder will not be in vain. His legacy will live on.”

At a candlelight service for all the officers and at individual memorials ceremonies for each, the other fallen officers were remembered as strong, humble, quiet, funny men who were like many other men and who loved their families at home and those on the police force.

Ahrens, who stood 6 feet 4 inches tall and weighed more than 300 pounds, was remembered not only as “intimidating,” but as “a gentle giant.”

Motorcycle police from across the country escorted the funeral processions from churches to cemeteries.

With the exception of Krol, who will be buried in Michigan, all of the other officers were laid to rest in the Dallas area.

A few hours after the shootings, a few people lighted several candles in front of the Dallas Police Department headquarters while hundreds gathered for a memorial at Thanks-Giving Square in downtown Dallas, not far from the site of the ambush. The water garden and memorial park was opened in 1964, a year after the assassination of President John Kennedy Nov. 22, 1963, not far from the spot where the lone gunman had killed the officers a few hours earlier

In the week after the police shootings, several other memorials sprang up across the city, alongside blue ribbons tied to trees and downtown skyscrapers awash in blue.

As the city said goodbye to the officers, the memorial that had started out in the plaza in front of Dallas Police headquarters with a few candles evolved into two police cars — one representing the Dallas Police Department and the other, the Dallas Area Rapid Transit — with a few flowers on top of them. Within a few days, more flowers, cards, letters, posters, balloons, and candles buried the cars.

The news networks had set up their tents and cameras on the site. Hundreds of people traveled from across the country to the plaza. Some went to take photos and a few went to try to get on television. Many of them went to hug police officers and to pray with them. Many went there just to cry.

Still, others went there to see the goodness that had come from evil.

“I came here because I was shocked with what happened,” said Jack Arias of Dallas, “and what I feel in my heart is love.”