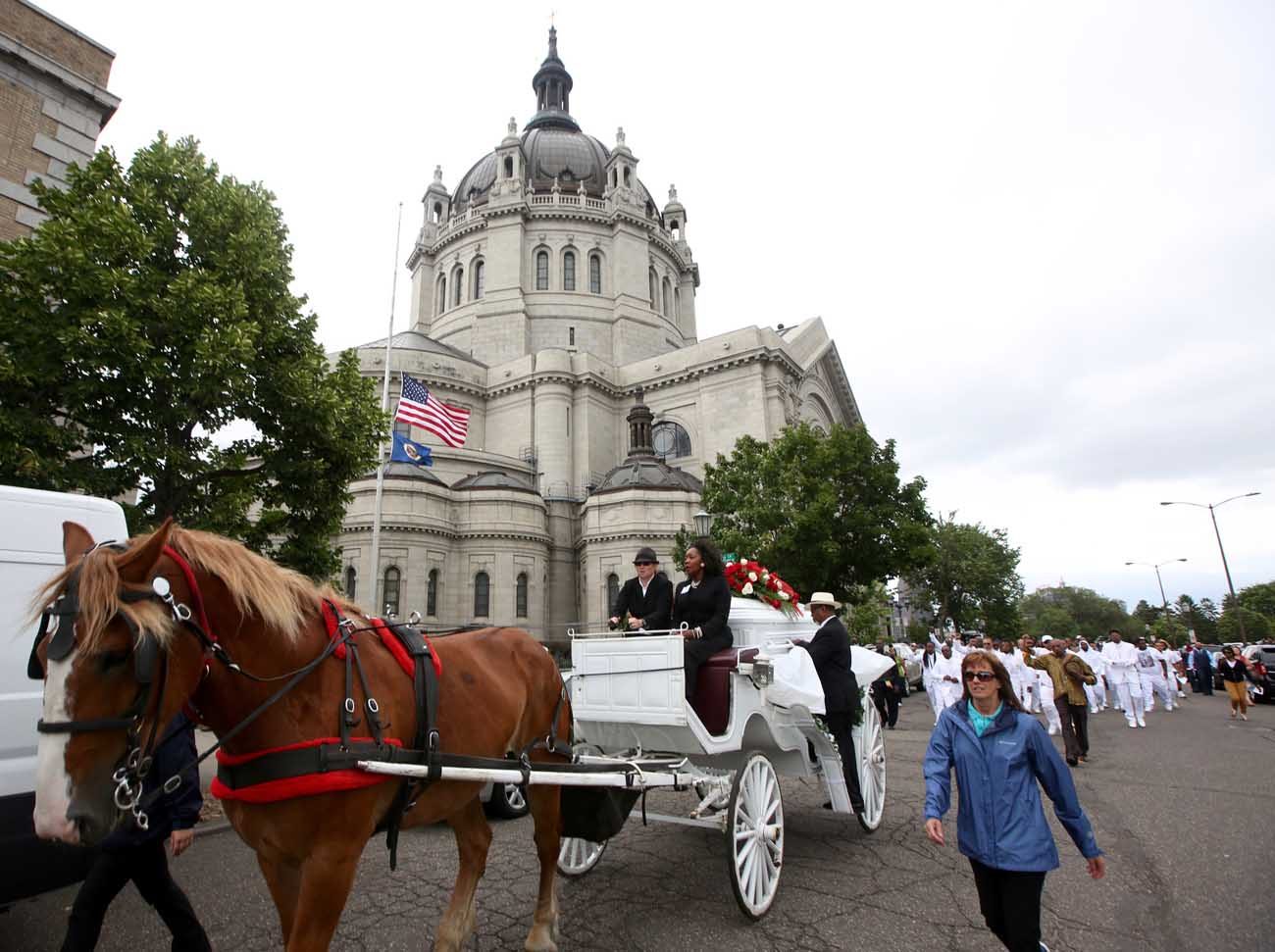 A horse-drawn carriage carries the casket of Philando Castile July 14 as it passes the Cathedral of St. Paul in St. Paul, Minn. Church officials say the mother of 32-year-old man, who was not Catholic, requested the cathedral hold an ecumenical funeral service for her son. Castile was shot and killed by a police officer July 6. (CNS photo/Dave Hrbacek, The Catholic Spirit)

ST. PAUL, Minn. (CNS) — The Cathedral of St. Paul in St. Paul was filled with mourners July 14 for the funeral of Philando Castile, a 32-year-old black man who was fatally shot by a police officer during a traffic stop in Falcon Heights July 6.

In remarks at the beginning of the service, Auxiliary Bishop Andrew H. Cozzens of St. Paul and Minneapolis said that “we stand together as brothers and sisters before our loving God united in prayer,” and linked the funeral to the Year of Mercy.

“In this year we are asked in a special way to try and show forth the merciful face of our God to those in need, those who mourn, those in need of healing, and to welcome into our churches all who hunger and thirst for the Lord’s tender mercy,” he said. “And so today, as we come before our loving God to ask for mercy, we ask the Lord to show his mercy to Philando, welcoming him to that place where every tear is wiped away.”

Although the Castile family is Baptist, Castile’s mother, Valerie Castile, asked the cathedral to hold the service. Father John Ubel, the rector, who is a Pope Francis-appointed missionary of mercy, presided over the ecumenical service, which followed an adapted form of the Catholic funeral rite outside of the Mass.

The Rev. Steve Daniels Jr., pastor of Shiloh Missionary Baptist Church in St. Paul, delivered a eulogy, where he called for unity, change and conversion.

“We need the Lord like never before,” he said, also calling for respect for the law, an end to racial profiling, and asking that Castile’s death not be in vain. “We cannot continue to survive if we don’t make a change.”

In short remarks before Scripture and poetry readings, family members remembered Castile as a respectful, caring man who was self-sufficient and loved his work as cafeteria supervisor at J.J. Hill Montessori Magnet School in St. Paul, where a reception was held following the funeral service.

Castile’s death came a day after a black man was fatally shot by police officers in Baton Rouge, Louisiana. The deaths are the latest among officer-involved shootings of black men in the U.S., and prompted demonstrations nationwide to draw attention to racism. During a demonstration in Dallas July 7, a sniper shot and killed five police officers and wounded seven other officers and two civilians..

Following the service, Bishop Cozzens said was he moved by Rev. Daniels’ words during the eulogy when he “spoke like a father” and said “we’ve got to come together or we’re not going to make it.” One of the Gospel hymns with the lyrics, “God’s going to turn it around,” resonated with him, he added.

“That’s our prayer,” he told The Catholic Spirit, the archdiocesan newspaper.

Responding to some Catholics’ criticism of holding a non-Catholic funeral at the cathedral, Bishop Cozzens said “the cathedral is a house of prayer for everybody. We agreed to do the funeral because it would honor God and the role the cathedral has in the community.”

In a July 13 statement, Archbishop Bernard A. Hebda said that the Archdiocese of St. Paul and Minneapolis “was honored that Philando Castile’s mother, desiring that her son’s funeral be an opportunity for ‘people to come together in a new way,’ thought our cathedral could be a fitting setting for an ecumenical service at which our community could unite with her family to pray for peace and reconciliation.”

He pointed to Pope Francis’ Sept. 9, 2015, general audience, in which the pontiff said, “The assembly of Jesus takes the form of a family and of a hospitable family, not an exclusive, closed sect.”

“At this difficult moment we feel privileged to have the opportunity to offer hospitality to the Castile family and to our hurting community,” Archbishop Hebda said. “We are praying that our cathedral might serve as a place where all might encounter a God who offers consolation and hope.”

Canon law permits a bishop to grant Catholic funerals for people who are not Catholic, but baptized. It also does not prohibit a Catholic church from being used for non-Catholic funerals or other events, as long as they are not contrary to the holiness of the sacred space.

Minnesota Gov. Mark Dayton, U.S. Sens. Al Franken and Amy Klobuchar, other public servants and clergy from a variety of denominations attended the funeral, as did several priests, seminarians and Little Sisters of the Poor.

Mother Maria Francis Pale, local superior of the Little Sisters of the Poor in St. Paul, attended the service because she believes it’s important for people to stand together in times of joy and in times of pain.

“I want to really share the pain and pray, and pray for the country,” she told The Catholic Spirit.

That the cathedral would open its doors to host a non-Catholic event seemed natural to her because the Little Sisters’ Holy Family Residence in St. Paul serves all denominations and races.

Sister Dorothy Struzinski said she and other members of her community attended the service “to give strength to the family and let them know we’re with them.”

“We were all taken aback by what had happened,” she said. “We’re all in this together. … We have to start being together, being united, working together. That’s so important. The violence in this country is never going to change unless we respect each other.”

Trygstad is assistant editor and Wiering is editor of The Catholic Spirit, newspaper of the Archdiocese of St. Paul and Minneapolis.

NEXT: At Mass and memorials, Dallas says goodbye to fallen police officers