Slain French priest was attack on ‘all of us,’ English imam says 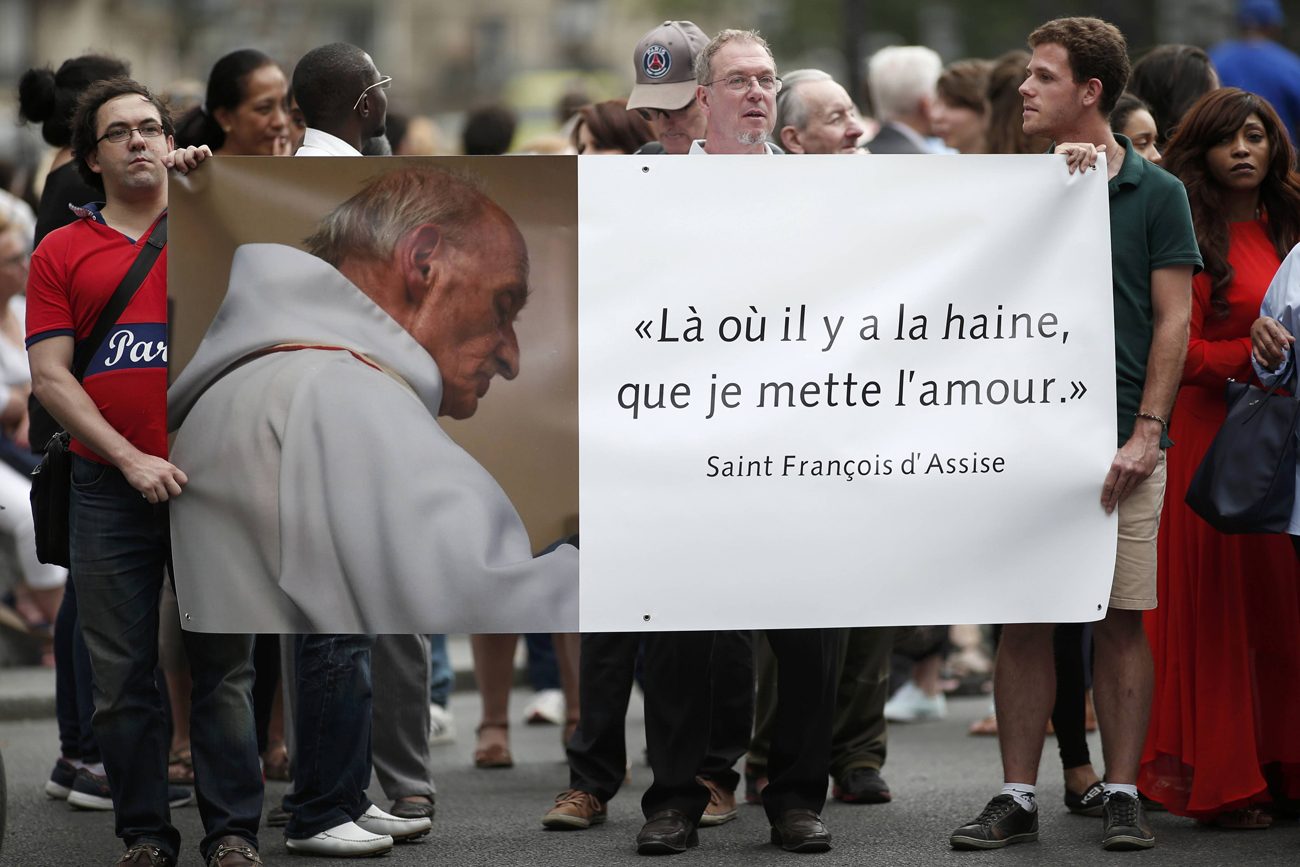 People hold a banner with a picture of French priest Father Jacques Hamel, which reads, "Where there is hatred, let me sow love," after a July 27 Mass at the Notre Dame Cathedral in Paris. Father Jacques Hamel was killed in a July 26 attack on a church at Saint-Etienne-du-Rouvray near Rouen by assailants linked to Islamic State groups. (CNS photo/Benoit Tessier, Reuters)

“This attack in a place of worship and on innocent worshippers in particular demonstrates that there are no boundaries to the depravity of these murderers,” wrote Imam Qari Muhammad Asim, senior imam at the Makkah Mosque in Leeds, England.

The knife-yielding attackers slit the throat of 85-year-old Father Hamel and also injured two others in the church, Eglise St.-Etienne, before they were fatally shot by police.

“In this extremely difficult time for the Catholic community, we stand in solidarity with our brothers and sisters of all faiths,” the English imam said in a statement. “An attack on any place of worship is an attack on a way of life of faith communities and therefore an attack on all of us.”

Muslims and Jews attended Father Hamel’s Aug. 2 funeral at the Notre Dame Cathedral in Rouen. “It was a duty,” Hassan Houays, a Muslim teacher from Saint-Etienne-du-Rouvray, told the AFP news agency. “We are here so that we can get along together.”

That solidarity also was evident July 31 when Muslims leaders and community members attended Masses at the Notre Dame Cathedrals in Paris and Rouen, France, and Catholic basilicas in Rome.

Yahya Yahe Pallavicini, vice president of the Islamic Religious Community of Italy, attended Mass at Rome’s Basilica of the Holy Cross of Jerusalem with about two dozen representatives of the community.

At a gathering before Mass, he said they came to “demonstrate brotherhood and to defend the sacred values of religion.”

Across the city, at Rome’s Basilica of St. Mary in Trastevere, dozens of Muslims joined members of the Community of Sant’Egidio and parishioners for the main morning Mass. Mohammed ben Mohammed, imam of a nearby mosque, told worshippers that those who murdered Father Hamel “have nothing to do with Islam.”

“They are dangerous and the enemies of Islam,” he said.

The support among religious leaders also was immediately apparent after news spread about the murder of the beloved priest described as a grandfather figure at the parish in the Normandy working class town of St.-Etienne-du-Rouvray.

That’s in part because French President Francois Hollande not only assembled security officials after the church attack but he also gathered representatives of Christian churches and Muslim, Buddhist and Jewish leaders to display interfaith unity.

Mohammed Karabila, president of the Regional Muslim Council of Normandy, told a French newspaper he was “distressed at the death of his friend” Father Hamel and pointed out that the two of them had worked together in an interfaith committee for nearly two years since the beginning of Islamic State attacks in France.

He described the priest as “a man of peace, of religion, with a certain charisma. A person who dedicated his life and his ideas to his religion. He sacrificed his life for others.”

Ahmad el-Tayeb, grand imam of Egypt’s al-Azhar mosque and university, who met with Pope Francis in May after years of suspended dialogue with the Vatican, said in a July 26 statement that the church attackers lacked “any sense of humanity and all the values and principles of Islamic tolerance, which invite us to peace and to avoid the bloodshed of innocents, without any distinction of religion, color, gender or ethnicity.”

The imam also called for an “intensification of efforts and joint initiatives to deal with the cancer of terrorism that now threatens the entire world, destroys innocent souls and threatens world peace.”

Detroit Archbishop Allen H. Vigneron received letters from local imams expressing sorrow about Father Hamel’s death. A letter from Imam Mohammad Elahi of the Islamic House of Wisdom in Dearborn Heights, pointed out that Muslims have also paid “a big price for the tragedy of terrorism, war and violence in the Middle East and the world.”

“Let’s all together and with one voice reject the so-called religious and political radicalism and all those who fund, train and support those devilish forces of darkness and destruction and pray for a world of peace, respect, love and justice.” he wrote.

Imam Suhaib Webb, a Muslim scholar in Washington, told Catholic News Service July 28 that Father Hamel’s death is “difficult to come to grips with on so many levels.”

He said the priest’s death filled him with “absolute astonishment and an incredible sense of horror,” not only for the loss of a great human being but because it was “someone walking and living what he professed.”

The imam said young Muslims, who are part of his online outreach through Snapchat, Twitter, YouTube videos and Facebook, have been praising the priest because they recognize he was an ally.

Father Hamel’s death hit particularly close to home for Imam Webb because it reminds him that he could be threatened, or worse, since this spring he and four other America Muslim leaders were placed on an ISIS hit list, accused of being apostates for their efforts to promote Islam’s coexistence within the Western world.

The priest’s death also was a harsh reminder of the deaths so many family members in his community have experienced because of acts of terror.

He also feels the weight that many in the Muslim community feel when terrorism is committed in the name of Islam because then all Muslims can be cloaked with suspicion or hatred. For example, he said he was living in Boston during the Boston Marathon bombing and, although he didn’t know the Tsarnaev brothers behind the bombing, he felt he “had to answer for what they did” because they were Muslim.

On July 31, Imam Webb spoke about the life of Father Hamel at a program he coordinates in Washington called City Sundays, which promotes interfaith dialogue. That morning, he attended Mass at the Cathedral of St. Matthew the Apostle at the invitation of a parishioner, to show solidarity with Catholics.

Kristin Garrity Sekerci, a Muslim who heard the imam speak about Father Hamel at a July 27 talk, said she came away from the discussion further convinced of the importance of engaging in and understanding Islamic tradition, especially when “others actively misuse it and abuse it.”

Sekerci, who works for Georgetown University’s Bridge Initiative at the campus’ Alwaleed Center for Muslim-Christian Understanding, said she also feels more strongly about the importance of interfaith work as a means to build connections and tear down misconceptions.

Finding common ground with people of other faiths, referred to as a “gray zone,” is something Islamic State leaders are opposed to, said Craig Considine, a sociology professor at Rice University in Houston, who has recently published a study on previously untranslated writings by the prophet Muhammad.

He said these writings — long hidden in secluded monasteries — prove that the persecution of Christians by ISIS was never justified by Mohammed and they also show that Christians living within Muslim communities at the time of Muhammad were protected and defended.

Considine, who has studied how Islam intersects with American life, has been to more than 120 mosques “from Hawaii to Vermont” and points out that as a Catholic he has been only experienced hospitality and welcome there.

And he too is further convinced he should keep writing and giving speeches at mosques in the wake of ongoing terrorist activity.

Father Hamel’s murder “gave voice to the extreme,” he said, harming Islam as well as Christianity. So for his part he is determined to stick with “little things” that might make some inroads to change.

“It starts with dialogue,” he said. “People have to want to talk with each other.” 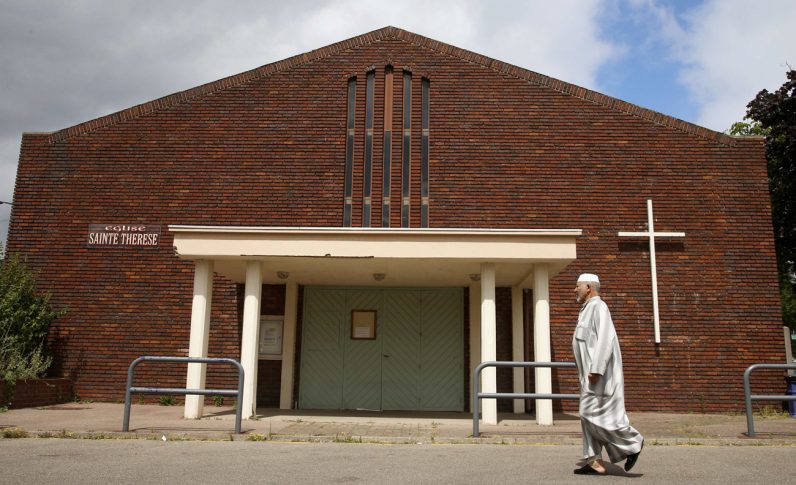 A Muslim man walks past St. Therese Church in Saint-Etienne-du-Rouvray, France, July 27, a day after French priest Father Jacques Hamel was killed with a knife and another hostage was seriously wounded in an attack on a church carried out by assailants linked to Islamic State groups. (CNS photo/Pascal Rossignol, Reuters)

NEXT: Iraqi, Syrian minorities want security before they return home