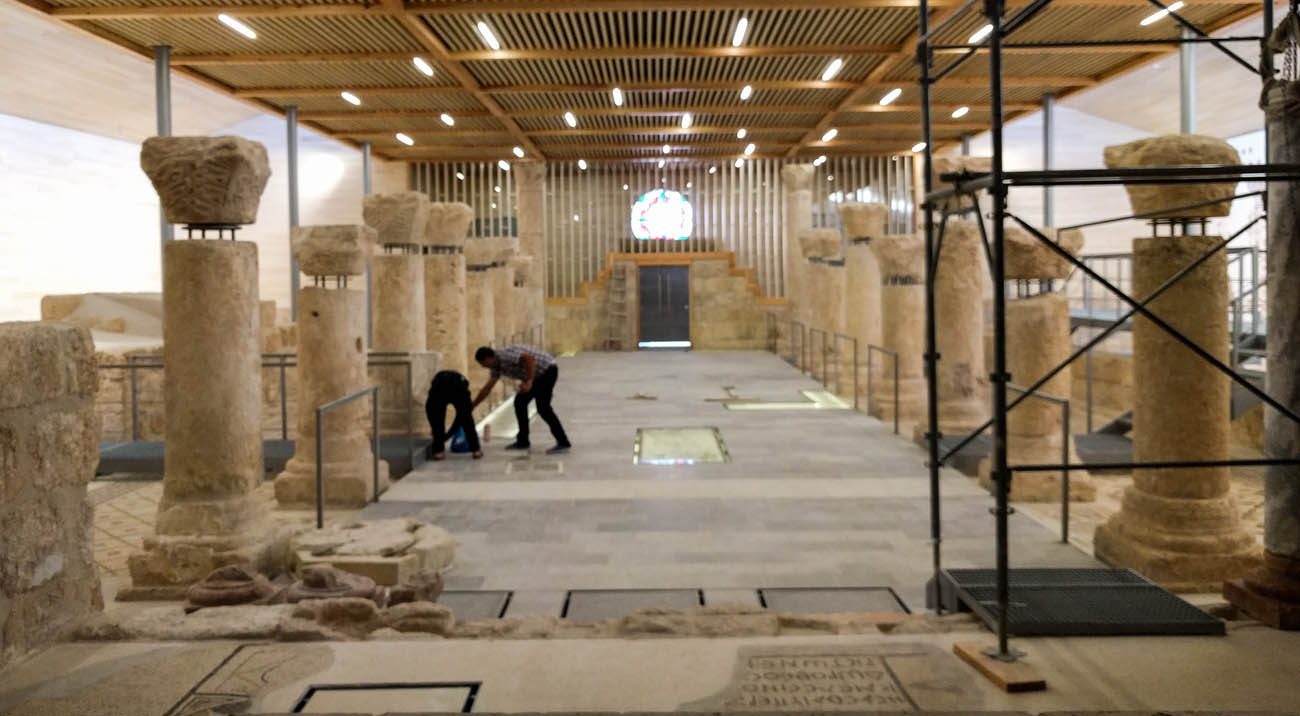 Workers make final preparations in this interior view of the restored Memorial of Moses on the top of Mount Nebo in Jordan Oct. 10. The memorial has reopened its doors to the public amid festivities after a nearly decade of restoration. (CNS photo/Greg Tarczynski)

MOUNT NEBO, Jordan (CNS) — The Memorial of Moses on Mount Nebo has reopened its doors to the public amid festivities, after nearly a decade of restoration.

Believed by ancient tradition to be the site where Moses saw the Promised Land and died, a church and monastery are perched atop this 3,300-foot rugged mountain facing the northern end of the Dead Sea. It has drawn Christian pilgrims throughout the centuries and is considered one of the most important pilgrimage, tourist, and archaeological sites in Jordan and the Holy Land.

Cardinal Leonardo Sandri, the special envoy of Pope Francis and prefect of the Congregation for Eastern Churches, said he was thrilled to officiate at a place of great spiritual significance to Jews, Muslims and Christians alike.

“The spiritual treasures that this place holds today are returned to Jordan and to humanity,” Cardinal Sandri told an Oct. 16 gathering of some 500 dignitaries, including Jordanian Tourism Minister Lina Annab, Bedouin leaders, foreign diplomats and top Catholic officials in the Middle East.

Excavations led by the Franciscan Custody of the Holy Land, which acquired the area in 1932, have uncovered significant remains of an early basilica — built in 597 on fouth-century church foundation — and Byzantine mosaic pavements. However, a simple structure sheltering these important finds was crumbling and needed to be replaced to protect the treasures it housed.

“I am very happy to represent here the Holy Father Francis and to be in the place of Moses when he received only the vision of the Promised Land,” Cardinal Sandri told the Catholic News Service as he viewed a sunset of purples and reds in the direction of Jerusalem.

“We are always walking to the Promised Land of peace, fraternity, justice, freedom for all the world in the name of Jesus Christ,” he added, as a pale, full moon rose over the other side of the mountain, transforming the place of prayer into a magical vista. 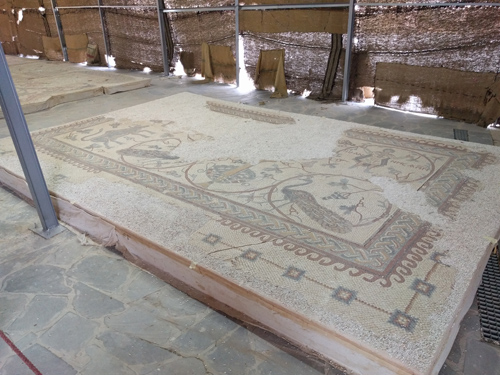 Restored mosaics are seen on display in front of the Memorial of Moses on the top of Mount Nebo in Jordan Oct. 10. (CNS photo/Greg Tarczynski)

Conveying Pope Francis’ words to the gathering, Cardinal Sandri commended Jordan for protecting precious religious and historic antiquities at a time when they have been ruthlessly destroyed in neighboring Syria and Iraq. He also praised the Arab kingdom for providing safety to refugees from war-ravaged lands.

“The kingdom of Jordan has become, in recent years, a place of welcome, hospitality, and healing for thousands of refugees and exiles,” Cardinal Sandri said.

He urged the international community to do its part to work for reconciliation in the region.

“We must set out toward a newfound freedom, in a concrete and fraternal solidarity with our neighbors, whoever they may be, especially the poor and suffering. This process demands a profound faith in God, who can never be invoked to cause terror and violence,” Cardinal Sandri said.

The custos of the Holy Land, Franciscan Father Francesco Patton, called the reopening of the sanctuary, “a gift for the present.”

“We are receiving back not simply a space, rather an invitation and a way of life,” he said.

He drew parallels between God’s close friendship with Moses and the spiritual encounter of modern-day pilgrims.

“The same Christian presence and the ancient monuments here have arisen from the desire to perpetuate and relive this experience, one that is offered to different cultures and different religions,” Father Patton said.

St. John Paul II visited Mount Nebo in March 2000 before starting his spiritual pilgrimage to the Holy Land with prayers in the basilica. Pope Benedict XVI gave a speech there in 2009.

Mount Nebo is also an active Franciscan monastery and the headquarters of the Franciscan Archaeological Institute. It’s a popular setting for Christmas and Easter Masses. A new organ now graces the Memorial of Moses.

“Together, this is meant to be a place of prayer first and a place to visit because of the artistic mosaics that have been preserved inside,” Father Eugenio Alliata, professor of archaeology at the Studium Biblicum Franciscanum in Jerusalem, told CNS.

He said the site is still yielding archaeological finds. While the mosaics were being restored, he said, “a tomb possibly never used, lined with beautiful alabaster stones, was discovered in the middle of the basilica.”

“The restoration has given new life and new colors to the most precious mosaics of the region,” Italian mosaicist Franco Sciorilli told CNS. Sciorilli served as the director of final works for the reopening of the Memorial of Moses.

Artistic adviser Eugenio Fagiani said restoring magnificent Byzantine mosaics and building a safe shelter to protect them while honoring Moses were not the only miracles to take place.

“There are so many connections between religions among the people working here to make the restoration happen,” he told CNS. “Muslims, Catholics, many Christians, so this also means that cohabitation can be possible.” 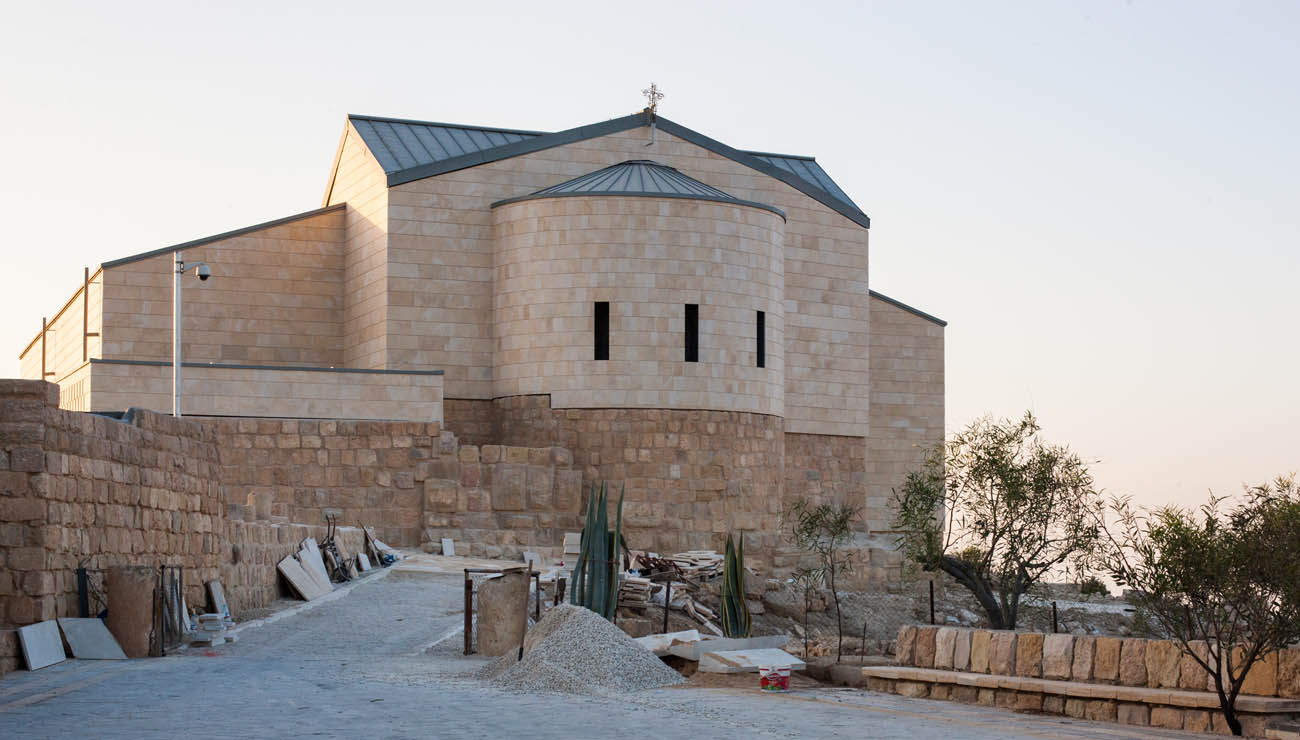 This is an exterior view of the restored Memorial of Moses on the top of Mount Nebo in Jordan Oct. 10. The memorial has reopened its doors to the public amid festivities after a nearly decade of restoration. (CNS photo/Greg Tarczynski)

PREVIOUS: Some Iraqis hopeful, but aid groups have concerns about Mosul offensive

NEXT: Even in midst of trials, Jesus never deserts his faithful, pope says