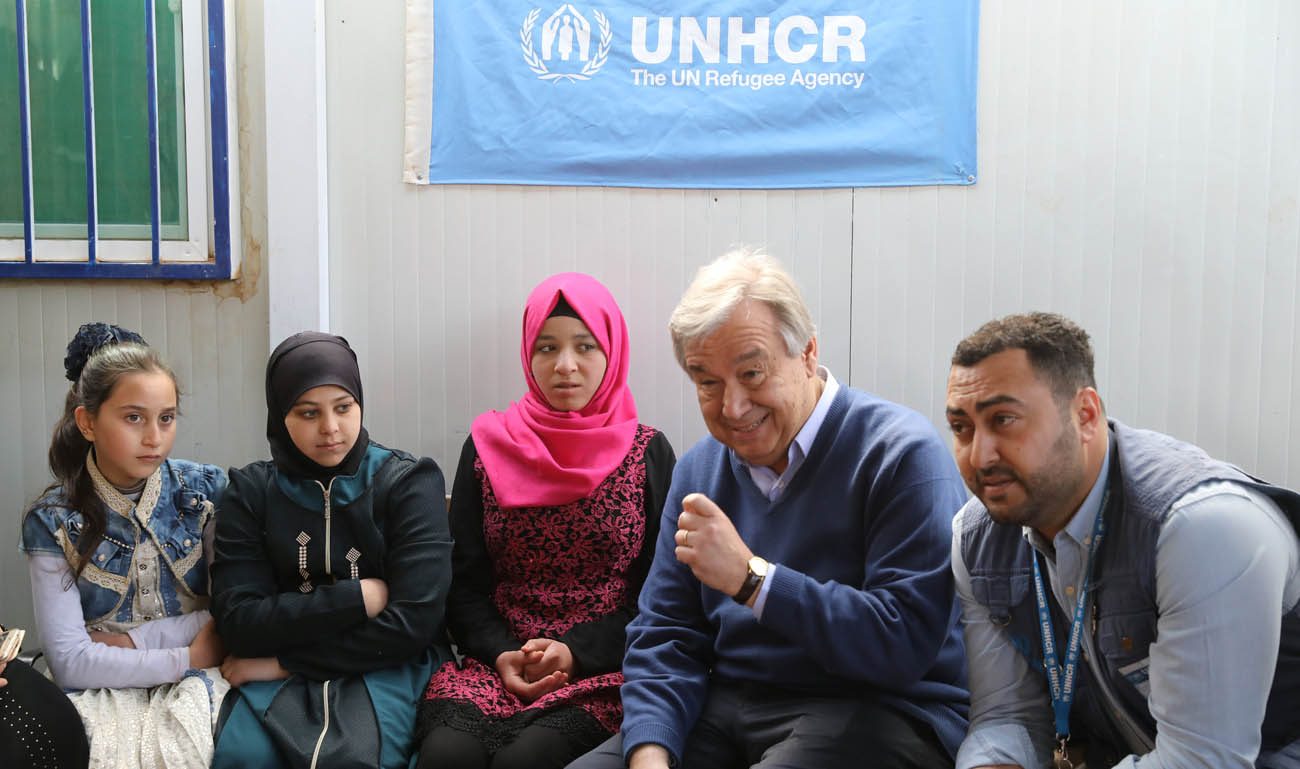 “I want to make a strong appeal to the parties of the conflict and those who have an influence on (them) to understand that we must make peace,” Antonio Guterres, a former Portuguese prime minister, told reporters at the camp on the eve of a summit gathering Arab leaders on the shores of the Dead Sea in Jordan.

“This has not only become a tragedy for the Syrian people, but it has become a threat to the stability of the region, a global security threat for the world, as terrorism is benefiting from the crisis in Syria and other crises in the world,” he said.

Guterres, 67, is no stranger to the camp, having served as the U.N. refugee agency’s high commissioner for a decade, visiting the dusty desert facility numerous times. He headed UNHCR when the Syrian conflict broke out in March 2011. But this visit was different, now as the U.N. chief, coming with the burden of Syria’s grinding war on his shoulders.

“I remember six years ago at the border, when I saw the first Syrian refugees coming to Jordan. How sad it is, how terrible it is, that today we still have Zaatari camp … and that the tragedy of Syrians is going on and on and on,” he said.

Syria’s war has killed more than 320,000 people and has forced 4.9 million people to flee their country.

Guterres is a practicing Catholic and clearly demonstrates his compassion for people. He listened carefully to the concerns of refugee women battling family violence and early marriage in the camp of some 80,000.

“These things are very worrying. Are there people to listen and solve the problems?” he asked, inquiring about the appropriate support systems available to help them.

He empathized with another woman requesting the need for family reunification. Her husband and a son are now in Germany; another son is in Turkey; she and two other sons are in Zaatari camp.

“This is not good. It would be much better if everyone could be reunified,” Guterres told her.

“When I was head of UNHCR, we discussed family reunification a lot. It always seemed like the right thing to do. But, unfortunately, a lot of countries are still not willing to do it. But we will see what we can do,” the U.N. chief said.

Guterres’ face lit up as he visited a boisterous classroom of fourth-grade refugee children learning English. He encouraged a special book club and information technology forum, dubbed the “Tiger Girls,” to keep pursuing their dreams.

The adolescent girls are championing reading and are considered role models for their community. He encouraged them to do well in school so they can one day return to Syria and perhaps become members of parliament.

One told him that she wanted to become a psychologist when she grew up, to help her people traumatized by the conflict.

Guterres told the teen that his wife and sister are psychiatrists. “Psychiatrists do very important things. They make people feel happy again.”

“He is very open about his Catholic identity,” said Msgr. Robert Vitillo, secretary-general of the Geneva-based International Catholic Migration Commission. “I have always found him so passionate and compassionate for refugees and how he tries to find a solution.

“While visiting refugee camps, he isn’t someone who goes off in a suit and tie. He went as someone who really wanted to listen. You could see that he is someone who cares a great deal. This is what impresses me most about him,” Msgr. Vitillo told Catholic News Service by phone.

“People are the center of his attention. This will make him a very good secretary-general of the U.N.,” said the church leader.

Msgr. Vitillo served for years as the Caritas Internationalis head of delegation to the United Nations in Geneva before assuming his current post with the International Catholic Migration Commission.

The commission is a network of Catholic bishops’ conferences and organizations that work with migrants and refugees, and it advocates on the global level. In the Mideast, the commission provides humanitarian assistance inside Syria, including medical services for pregnant women and children, and makes available safe play spaces for children.

Guterres has established new procedures at the U.N. against sexual abuse to address violations carried out in by U.N. peacekeepers and staff. There are now internal controls to prohibit someone with such history from consideration for a U.N. job, Msgr. Vitillo said.

“He made it absolutely clear that there is zero tolerance for such behavior. I’m very impressed with his strong stand on this,” Msgr. Vitillo said. “We have to make sure that this is not happening in the refugee community.”

NEXT: Agency’s gift boxes provided by donors bring joy to children in Haiti