Conference aims to give young people a voice ahead of synod, WYD 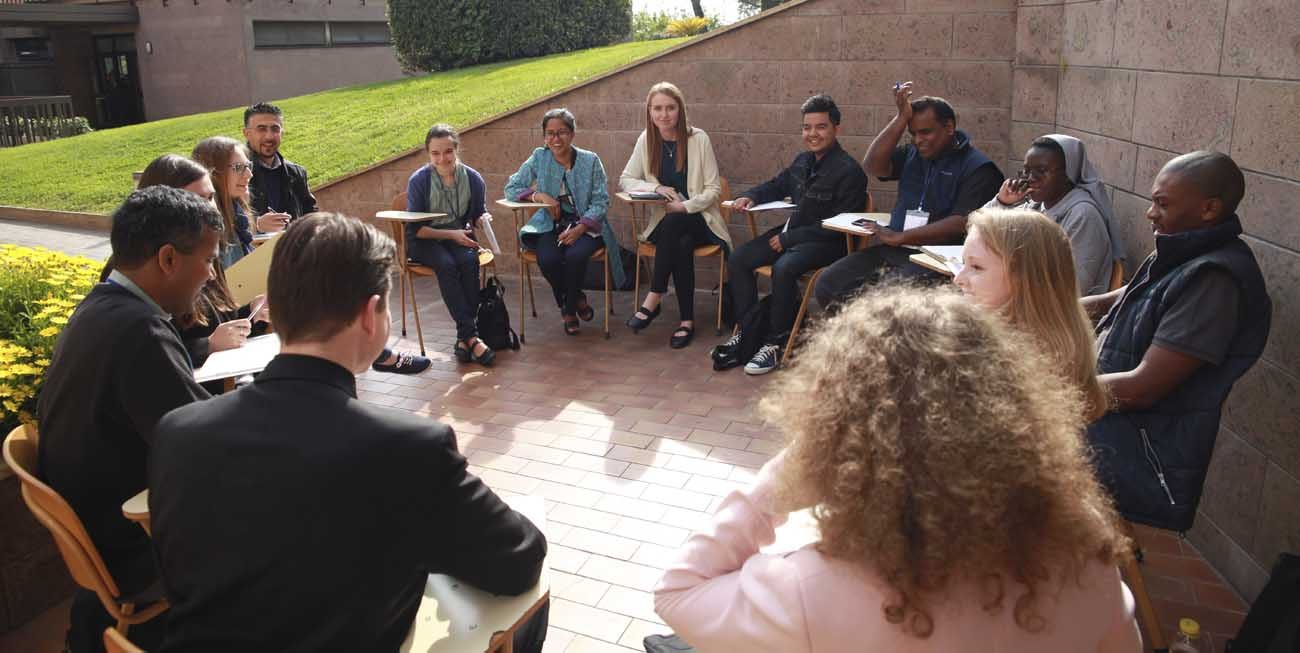 Young people talk during a conference in Rome April 6. The conference was in preparation for next year's Synod of Bishops on young people, the faith and vocational discernment and World Youth Day in 2019. (CNS photo/courtesy Dicastery for Laity, Family and Life)

ROME (CNS) — Preparing for the 2018 Synod of Bishops on youths and the celebration of World Youth Day 2019 in Panama, the Catholic Church needs to examine how it speaks to young people, several of them told a Vatican meeting.

The church needs to learn how to communicate with young adults who “don’t know the church is looking for us,” said Suness Jones, a 22-year-old U.S. delegate to the Vatican Youth Forum.

The April 5-9 forum was organized to discuss ways both to prepare young men and women for the synod and World Youth Day, but also to engage with young people on the issues affecting them most.

Addressing some 300 young adults from around the world April 6, Cardinal Lorenzo Baldisseri, secretary general of the Synod of Bishops, said as a sign of the “pope’s affection for young people,” he personally chose the theme, “Young people, faith and vocational discernment.”

The synod, which will be held in October 2018, is not designed as a study on young people nor will it be led by them, the cardinal said, but the Vatican hopes it will be a synod “with young people” and one that helps them better express and share their faith.

“The general disconnection from church is one of the biggest challenges” the church faces in reaching out to youths and young adults, said Paul Jarzembowski, assistant director of the U.S. Conference of Catholic Bishops’ Secretariat of Laity, Marriage, Family Life and Youth.

“One of the biggest things young people face today is just this feeling that they may not feel that the church loves them, cares for them, even knows they exist. And so they become indifferent, they become disconnected,” he told Catholic News Service April 6.

The church needs to focus on evangelization “not because we need more numbers,” but to let young men and women know they are appreciated and that their “gifts are important to building the kingdom of God,” he said.

Jarzembowski represented the United States at the Rome meeting along with Jones, who is a lay missionary for NET ministries in the Diocese of Fort Worth, Texas.

Young men and women, she told CNS, “want to be known as part of a church that loves them, that cares for them, that sees them as valuable.”

Ashleigh Green, a 25-year-old social worker in the Diocese of Broken Bay, Australia, also spoke on the church’s need to reach out and she focused specifically on young adults who are marginalized and suffering due to violence, drugs or alcohol abuse in their homes.

Green told the assembly of one her most recent cases: a 14-year-old girl living in a Catholic Care group house after being removed from her home due to domestic violence and neglect.

The girl, she said, proudly told her that she came up with her own religion. When asked more about the religion she made up, the girl described it “as a religion where everyone is accepted as who they are. There was only love in this religion and no fighting with other religions.”

“As I listened to this girl talk, she essentially described everything that our church envisions itself to be. If this girl, who is living in a Catholic Care residential home, believes that she needs to create her own religion to find one that is welcoming, loving and accepting of people from all walks of life, it makes me wonder what her experience of the church has been.”

“My hope is that we not only address the issues of the youth who are sitting in the pews on Sundays, but that we go outside and be an outgoing church,” Green told CNS. Catholics need to see “how we can engage young people on the margins and young people who don’t normally have a voice and give those young people a voice.”

Jones, the U.S. delegate, said that with its focus on discernment, the synod could find ways to help young people trying to understand and discern their vocation, although the term often is misunderstood as referring only to priesthood and religious life.

“I think in the United States when we think about vocation, we think about priesthood, we think about religious life, and I think that’s scary for a lot of youths,” Jones said. “A lot of girls I know do not want to be sisters, it just freaks them out.”

The synod is an opportunity to “expand the term” and help young adults get “better clarity for valuing marriage,” which also could give “a lot of strength to the relationships they have now so that they can prepare for a strong marriage that serves God,” she said.

Marina Sampayo, a 22-year-old member of the youth movement of the Teresian Institute in Barcelona, Spain, told participants at the conference that young people “have to search on Wikipedia” to try to understand church documents and tenets of the faith. Her blunt assessment of church communications failures received applause from the audience.

Later, Sampayo told CNS that while she does read church documents, “it’s something that I’m not really passionate about because it demands concentration.”

She said she hoped the synod will focus on better ways to engage young men and women who often feel left out or lose interest because they do not understand the language the church uses.

NEXT: Report: Consider conditions in Central America before mass deportations