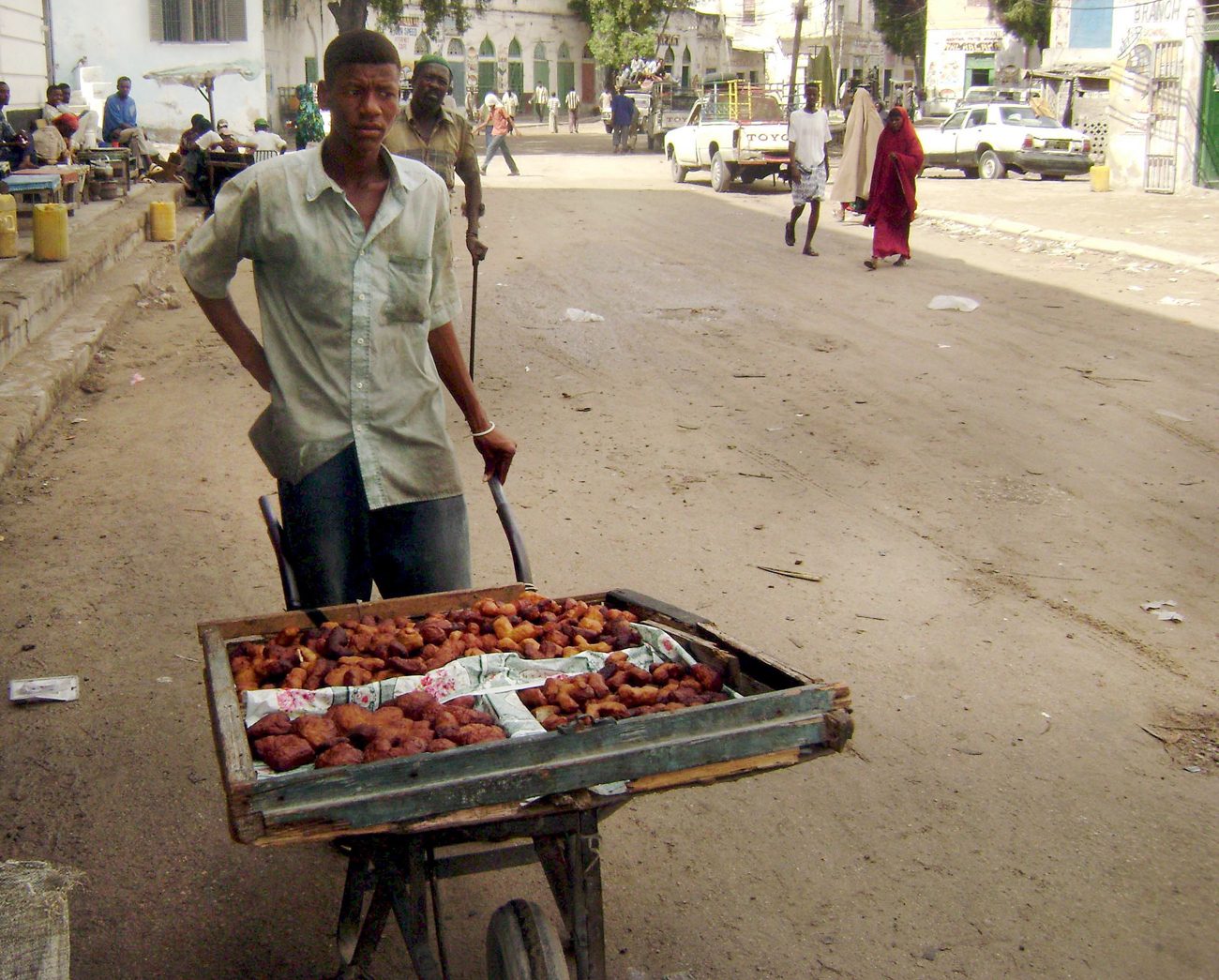 A man in Mogadishu, Somalia, sells fried flour in a market in this 2008 file photo. (CNS photo/Badri Media, EPA)

WASHINGTON (CNS) — Countries such as the U.S., the United Kingdom and Canada have pledged large sums of money to assist countries facing severe food emergencies, but a gap exists between pledged aid and the amount of aid collected.

An Aug. 4 report from the U.N. Office for the Coordination of Humanitarian Affairs stated that South Sudan, Somalia, northeast Nigeria and Yemen need more than $6.3 billion in humanitarian aid if they are to “avert a humanitarian catastrophe” of 20 million people. At least $4.9 billion of the requested $6.3 billion is needed for immediate needs. At the time of the report, only 51 percent of $4.9 billion had been received since the initial request in early spring.

The U.N. reported that the U.S., Canada and Australia have completed funding their pledges, but not all contributions from the U.K. and the European Union have been received. The same report stated the U.S. made contributions to the Central Emergency Response Fund as well, providing humanitarian aid to “scale up mitigation measures” specifically addressing famine, malnutrition and food insecurity in Africa and Yemen.

On July 8, the U.S. Agency for International Development announced it was increasing humanitarian assistance by $639 million, bringing its total pledge for fiscal 2017 to more than $1.8 billion for Africa and Yemen.

“Despite the influx of aid that has helped to alleviate famine in some areas of South Sudan, and has so far prevented famine in Yemen and Somalia, the overall food security situation is worsening, and life-threatening hunger continues to spread in both scope and in scale,” Robert Jenkins, acting assistant administrator for the U.S. Agency for International Development’s bureau for democracy, conflict and humanitarian assistance, told a news conference July 11. 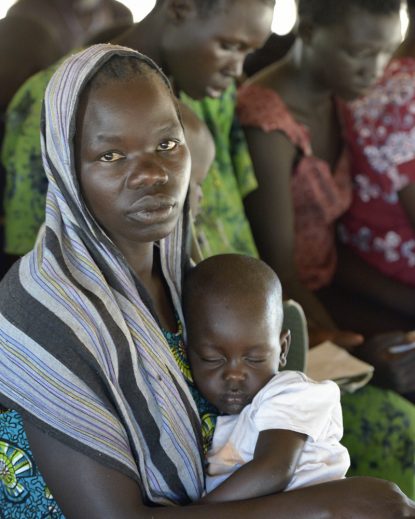 A woman waits with her child in an outreach clinic in the Rhino Refugee Camp in Uganda May 3. Uganda is housing 1 million refugees from South Sudan. (CNS photo/Paul Jeffrey)

A common concern for many, however, is the amount of time that passes between the appropriation of funds and the delivery of aid to the countries facing crisis.

Catholic Relief Services has worked with members of Congress in both parties to secure funding for the foreign assistance programs for the upcoming fiscal year 2018, which will begin in October. The House appropriations committee passed the fiscal year 2018 foreign assistance appropriations bill, and the Senate is expected to mark up its version of the bill following its return from the August recess.

“In response to proposals completely eliminating Food for Peace and cutting International Disaster Assistance, we saw Congress in both chambers continue to fund these programs at high levels, which we are very appreciative of,” Garduno told Catholic News Service Aug. 3.

CRS draws much of its funding for its international emergency aid programs through International Disaster Assistance and Food for Peace, two federally funded accounts for food and nonfood aid. Such funds, plus private resources, enable CRS to support programs in Africa and Yemen.

Many other countries have provided aid through their own federal funding, increasing international involvement in Africa and Yemen.

Development and Peace, the international development organization of the Catholic Church in Canada, worked to raise $2.5 million between March 17 and June 30. The Canadian government’s Famine Relief Fund agreed to match up to $1.3 million raised in that time frame. The two were able to send $3.8 million to Africa and Yemen through on-the-ground partners such as Caritas Internationalis.

“We are deeply thankful for our donors and the government of Canada for their help in providing life-saving relief to tens of thousands of men, women and children who are in imminent peril in Africa and Yemen,” said Serge Langlois, executive director of Development and Peace.

The British Catholic agency CAFOD began a joint appeal with 12 other aid agencies March 15. By the end of June, it had raised 60 million euros (US$70.4 million), which included 10 million euros from the U.K. government aid match fund. Similar to Canada, the funds were directed to local Caritas chapters for distribution of goods such as food, mainly consisting of rice, flour, cooking oil and beans.

While South Sudan, northeastern Nigeria, Somalia and Yemen remain the countries in most danger, surrounding areas are also experiencing extreme conditions due to drought. On Aug. 3, the U.S. announced more than $169 million in humanitarian aid to be directed toward Ethiopia and Kenya. This increase in funding will allow for emergency food assistance, particularly nutrition supplies designed to treat malnourished children and safe drinking water, said USAID.

While presenting humanitarian aid immediately to these countries can bring assistance to suffering people, providing solutions to conflict will bring lasting solutions.

David Cloutier, professor of theology at The Catholic University of America, told CNS that often aid can become a source of dependence for the struggling countries, whose corrupt governments can put their own country’s progress on the back seat.

“That seems not to excuse people from the responsibility of helping those who are immediately in need,” Cloutier said. “In fact, people in these countries are suffering because they have been thrown off of land that they may have worked for a long time. … It is possible to produce food, but they are experiencing acute conditions where they can’t produce food, and there is a need for immediate help. It is true that long-term aid is not the solution. There has to be an end to conflict.”

Sean Callahan, president and CEO of Catholic Relief Services, told Catholic News Service about his recent trip to South Sudan, where he witnessed firsthand the need for humanitarian aid to this region.

“If we don’t assist people in their homes, in their countries, where they actually would like to stay, they’re going to migrate for a better life, for security for their children, for opportunities,” Callahan said. “I think it’s inherent upon us as Catholics, and as Christians, that we reach out and help people who are in dire need. … They actually don’t want to migrate to another country, and if we don’t provide that assistance, they will.”

NEXT: In Sudan’s Nuba Mountains, no food left, and children are dying