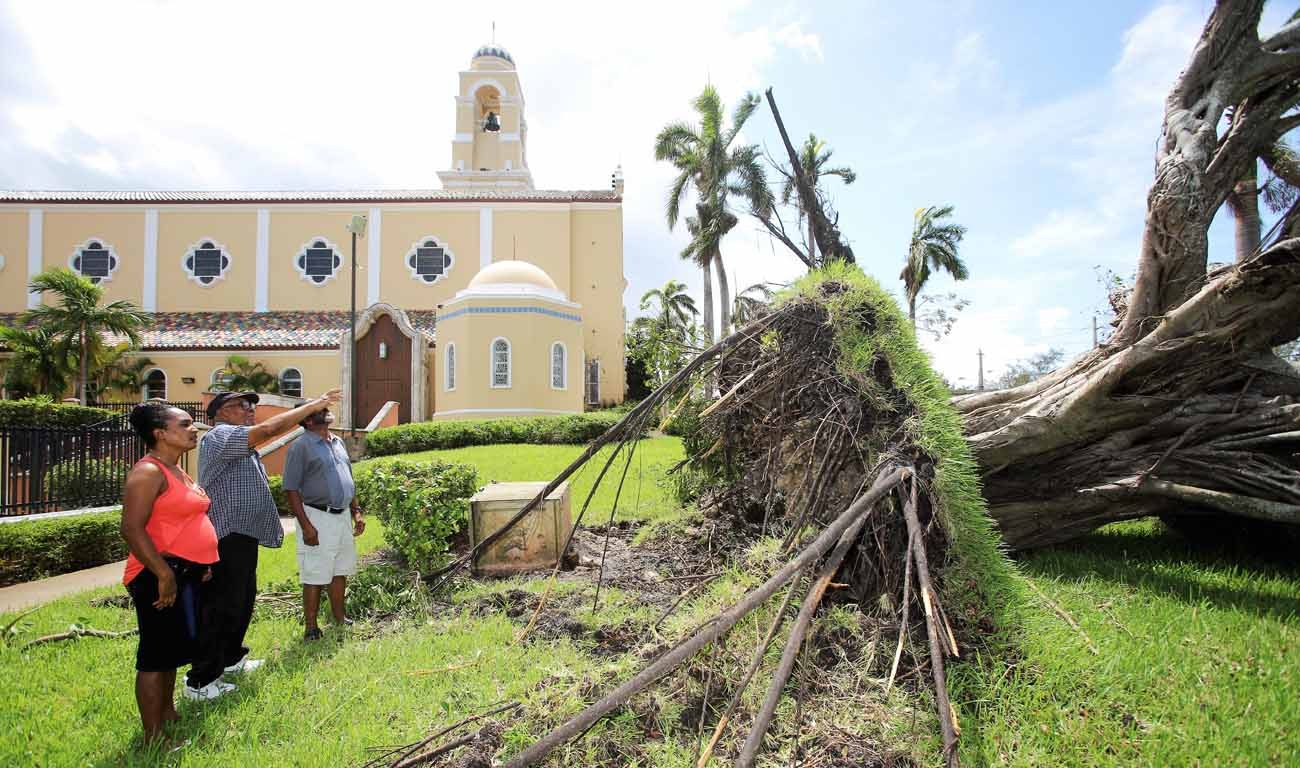 Parishioners point at a fallen tree Sept. 11 uprooted on the grounds of St. Mary Cathedral in Miami after the passing of Hurricane Irma. (CNS photo/Marlene Quaroni, Florida Catholic newspaper)

MIAMI (CNS) — It could have been a lot worse.

That was the initial assessment for Archdiocese of Miami parishes and schools after Hurricane Irma scoured South Florida.

Even the initial reports from the hardest hit portion of the archdiocese — the lower Keys, where the Category 4 storm made landfall Sept. 10 — were cautiously optimistic.

Drone images showed the church, parish hall and rectory of St. Peter Church on Big Pine Key — about 10 miles east of Irma’s landfall at Cudjoe Key — had survived the storm.

In a Facebook post Sept. 11, the Basilica of St. Mary Star of the Sea in Key West announced that Father John Baker, pastor, and the Sisters of the Holy Spirit who serve at the church — none of whom evacuated — “have all weathered the storm without incident and are well.”

A Sept. 13 post said “despite some minor damage to the roof, and some downed trees, all is well at the basilica. … Clearly, we remain under Sister Louis Gabriel’s patronage and Our Lady’s protective mantle. Interestingly enough, Father John also reported that despite hurricane force winds, all of the candles in the grotto remained unscathed during the storm.”

The reference was to the outdoor grotto of Our Lady of Lourdes, built in 1922, where locals traditionally pray for protection from storms. Sister Louis Gabriel was the Sister of the Holy Names of Jesus and Mary who asked that the grotto be built, and promised that as long as it stood, “Key West would never experience the full brunt of a hurricane.”

That protection seemed to have extended to the rest of the Archdiocese of Miami, which had been bracing for the full brunt of Irma’s wrath.

The storm broke records — with wind speeds reaching 185 miles per hour and remaining at Category 5 for more than three days — before barreling into the Leeward Islands of Barbuda and St. Martin, pummeling the U.S. Virgin Islands and Puerto Rico, and then scraping northern Cuba.

After making its long-anticipated turn northward, the eye made a second landfall at Marco Island on Florida’s west coast, sparing Miami-Dade and Broward counties the feared worst-case scenario of catastrophic winds and disastrous storm surge.

“We did get hurricane gusts and for the most part our buildings did pretty well. We lost shingles, tiles, but in Dade and Broward we didn’t see major catastrophic structural damage,” said David Prada, archdiocesan director of Building and Properties.

The one exception was the old St. Stephen School in Miramar — now a charter school — where the roof failed, allowing water inside.

Most of the damage to church properties — like the damage to homes and neighborhoods throughout South Florida — involved falling trees and branches. Most archdiocesan schools delayed classes until Sept. 18 to clear the grounds of debris and await the return of electricity, not just to their facilities but to surrounding streets and traffic signals.

“We were very lucky,” Prada told the Florida Catholic newspaper. “We were expecting we might have catastrophic issues,” but even a gym under construction at the Basilica School of St. Mary Star of the Sea in Key West withstood Irma’s blast.

“It’s a testament to good design and good building codes. They make a difference,” said Prada.

He noted, however, that he had only heard secondhand reports about the damage in the Keys, since the pastors of the four remaining parishes — San Pablo, St. Peter, San Pedro in Tavernier and St. Justin Martyr in Key Largo — had not been allowed into the area Sept. 13 to personally assess the buildings.

“Communication breakdown is the hardest part,” said Prada, noting that cellphone service throughout South Florida was spotty but it was practically nonexistent in the Keys.

Miami Archbishop Thomas G. Wenski posted on Twitter that, thanks to a crew from AT&T, he had spoken briefly to Father Baker and the “Conch Republic seems to have fared well.”

In fact, most communication between pastors and their parishioners, and principals and school parents, seemed to be taking place on social media.

The archdiocese certainly used its Facebook, Twitter and Instagram pages before and after the storm, posting constant updates on school closings and re-openings, as well as Archbishop Wenski’s statement that no Masses be celebrated over the Sept. 9-10 weekend.

Because of the storm, the archbishop granted a dispensation from the Sunday obligation. But the faithful could still attend Mass via the links to the Masses for shut-ins, in English and Spanish, which are posted on the archdiocesan website.

Or they could have caught the Facebook feed of Immaculate Conception Church in Hialeah. On the evening of Sept. 9, as everyone hunkered down to wait for Irma, Immaculate’s pastor, Father Manny Alvarez, and his three resident priests celebrated the vigil Mass in the parish chapel and streamed it via Facebook Live.

The department’s Instagram post went viral, and Sister Margaret Ann wound up being interviewed by CNN’s Erin Burnett. Inside Edition, CBS News, NPR and a host of other news outlets also jumped on the story of the chainsaw-wielding nun.

“We teach our students, do what you can to help,” she said, noting the school “had chainsaws sitting in the closet” that needed to be used. “So this was an opportunity where I could do something to help and thanks be to God I was able to do it.”

The archdiocese hopes everyone remembers that lesson when it comes to helping others recover from Irma’s blows. Catholic Charities of the Archdiocese of Miami is accepting monetary donations for Hurricane Irma relief efforts at www.ccadm.org.

PREVIOUS: Priest in constant recovery mode for parishioners who ‘lost everything’