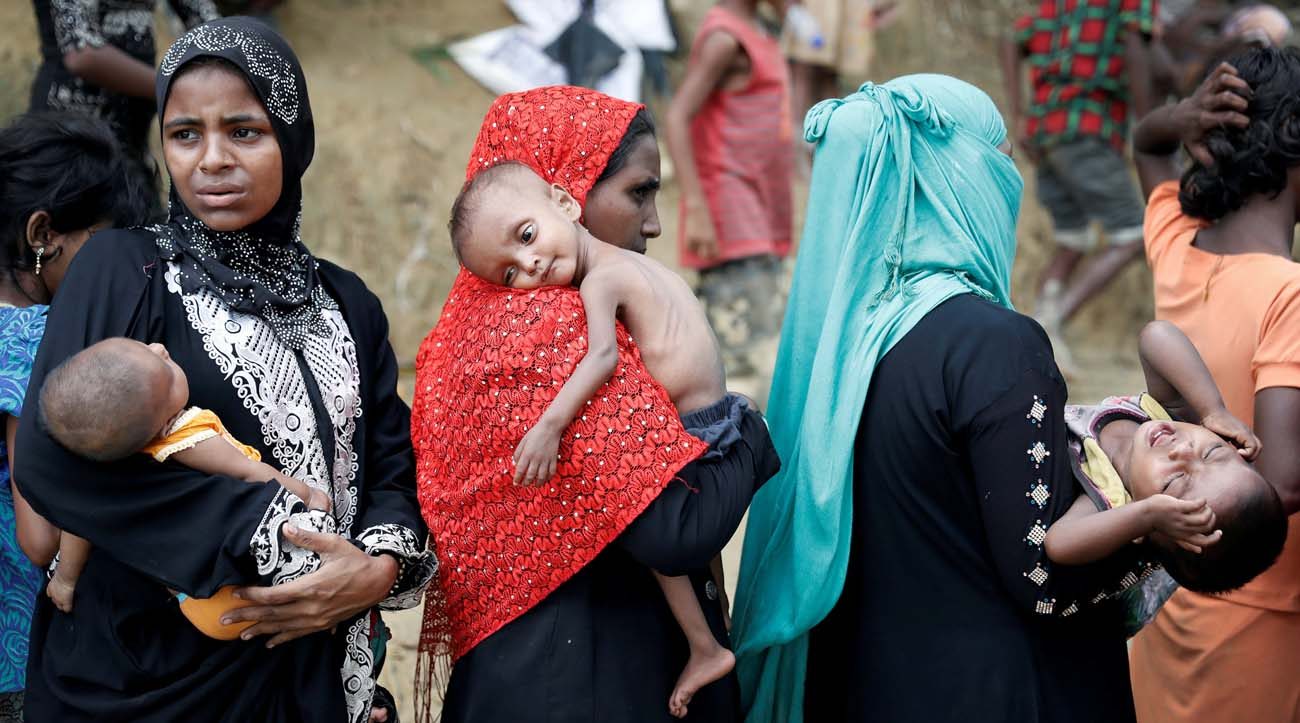 A severely malnourished child is seen as Rohingya refugees wait to receive aid Sept. 25 at a camp in Cox's Bazar, Bangladesh. Immigrants and refugees need to be respected and assisted, not treated like an enemy, a panel said during a Sept. 27 news conference at the Vatican launching the Caritas "Share the Journey" campaign. (CNS photo/Cathal McNaughton, Reuters)

VATICAN CITY (CNS) — Politicians and community leaders must recognize the benefits of welcoming newcomers and not believe immigrants should be rejected automatically, said members of a panel launching the Caritas “Share the Journey” campaign.

Immigrants and refugees need to be respected and assisted, not treated like an enemy, they said during a Vatican news conference Sept. 27.

“If that person’s creativity and talents are developed, they do not become a threat; they even contribute to the community,” said Philippine Cardinal Luis Antonio Tagle of Manila, president of Caritas Internationalis.

“And if a politician cares for his or her country, this is one way by which he or she could care for the country,” the cardinal said. “Don’t close the doors! You might be closing the doors to people who might enrich your society.”

The two-year campaign, sponsored by Caritas Internationalis, the global network of national Catholic charities — including the U.S. Catholic Relief Services and Catholic Charities USA — aims to encourage all Catholics to organize or take part in events and opportunities that allow immigrants and refugees to share their stories with their host community.

“Whenever I meet a migrant, I am reminded of my grandfather, who migrated from China as a poor boy and came to the Philippines,” the cardinal said.

Who would have thought that that poor boy would someday “produce a cardinal grandson?” he said.

“Why are you afraid?” the cardinal said, slamming his hand down, then immediately apologizing with a smile for the gesture.

“The migrant that you are rejecting might be contributing to that community,” he stressed.

Oliviero Forti, head of Caritas Italy’s migration office, said increasing hostility toward migrants and refugees was one of the reasons to launch the campaign.

“It is a campaign that is against no one,” he said.

It’s about sharing a journey and a message, especially with those who are having a hard time understanding or dealing with immigration “because our role is above all to speak with those today who are afraid, because fear is never without a reason,” he said.

The first step, he said, is to engage in dialogue and explain the reasons why people feel forced to abandon their homelands. The campaign aims to help all people, including Catholics, “serenely” live the reality of migration, which must never “get out of control.”

Sister Norma Pimentel, a member of the Missionaries of Jesus and executive director of Catholic Charities of the Rio Grande Valley in Texas, said she has seen people who were “100 percent against immigration” suddenly become “100 percent” more accepting after these personal encounters.

“It opens their minds” and lets them see that immigrants and refugees “are people like us,” she said. That kind of direct contact, she said, also could help leaders formulate assistance and policies that are based on the actual lived experience and problems of immigrants and refugees, not on presumptions or prejudice.

Bekele Moges, head of Caritas Ethiopia, said people “are not really moving for the purposes of moving,” but “there is something forcing us to move.”

The “Share the Journey” campaign, he said, is about changing people’s attitudes from wanting to put up walls to welcoming and protecting.

Immigrants and refugees “should not be seen as an enemy or as a threat. We have to be approached, we need to be talked to, dialogue — that makes a difference,” he said.

Yankuba Darboe, who works with young immigrants at Caritas centers in southern Italy, told Catholic News Service that the campaign is a “plea to the whole world” to not see immigrants “as criminals,” but instead secure borders from militias and gangs that run human trafficking rings.

Darboe, a 21-year-old from Gambia, had been kidnapped and tortured by traffickers as he made his way into Libya looking for work. After escaping, he went to Italy and found Caritas, which helped him with his studies; he is now pursuing a university degree in biology.

Migration from Africa is often rooted in politics because leaders are not always acting in the best interest of their own people, Darboe said. Often they are trying “to secure a job for themselves” at whatever the cost.

Many countries in Africa “are not independent,” he said, in the sense that their leaders are heavily influenced by Western interests “that invaded our culture,” which results in adverse conditions or limited opportunities, and encourages people to leave Africa.

Ironically, he said, the Western leaders whose policies fuel African expatriation “are the same politicians giving a bad name to immigration” and the people landing on their shores.

“If a host country tries to make people understand that (immigration) is not a bad thing for a country, migration will be a different story for the host country,” Darboe said. “Instead of judging someone you do not know, get to know him first, because interacting and learning about each other will change worlds; it makes life easier.”

NEXT: Share hope with those seeking better lives, pope says