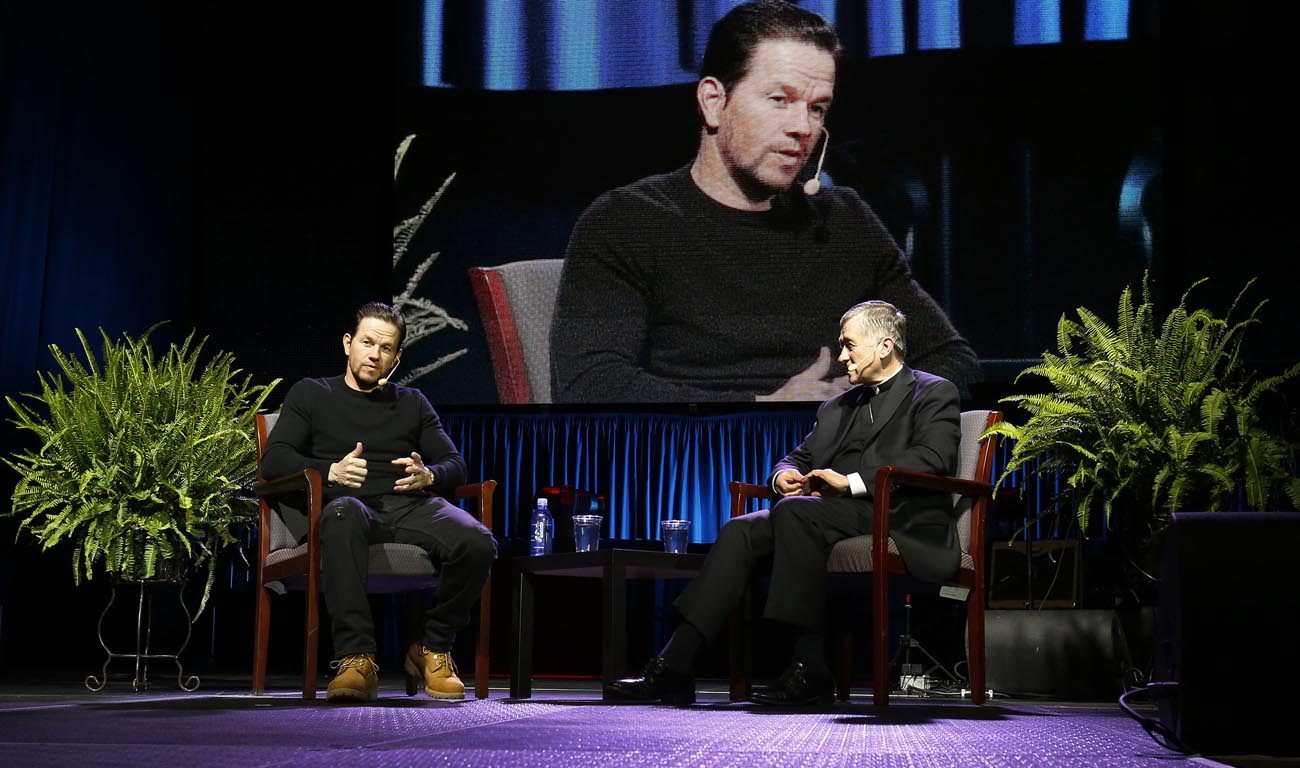 Actor Mark Wahlberg and and Cardinal Blase J. Cupich of Chicago discuss faith and the life of young adults during a re(ENCOUNTER) event at the UIC Pavilion Oct. 20. (CNS photo/Karen Callaway, Chicago Catholic)

CHICAGO (CNS) — Hearing the faith journey of Hollywood actor and businessman Mark Wahlberg left an impression on the hearts of many young adults at the Archdiocese of Chicago’s first (re)Encounter event Oct. 20 at the UIC Pavilion.

“It’s powerful for a celebrity to feel that way about religion,” said Omar Lopez, 21, from St. Gall Parish. “For me, when I think about a celebrity, I think cockiness, selfishness, but to hear an artist say that he takes time to just pray, that’s an incredible feeling.”

Lopez rushed to the stage at the end of Wahlberg’s segment and got to shake the actor’s hand.

“I came to hear him because personally I feel lost myself,” Lopez told the Chicago Catholic, the archdiocesan newspaper. “At first I was really skeptical about it. I came here to just to hear different stories and to hear different aspects of life.”

The highlight was a question-and-answer session with Wahlberg and Chicago Cardinal Blase J. Cupich.

Star of movies such as “Transformers: Age of Extinction,” “Ted” and “Deepwater Horizon” and producer of the popular HBO series “Entourage,” Wahlberg takes his faith seriously, often attending daily Mass and making time for quiet prayer each morning. He emceed the Festival of Families with Pope Francis during the World Meeting of Families in Philadelphia in 2015.

His faith wasn’t always important to him. Youngest in a family of nine children, he dropped out of school at 13, and served prison time. At 16, he was charged with attempted murder but he pleaded guilty to assault.

Today, he said, he’s committed to being a good father and husband and giving his children the Catholic education he didn’t have.

“I’m a street kid from Dorchester, Massachusetts. Grew up in St. Greg’s and St. William’s parishes,” he told the crowd.

Because his parents worked a lot, he was often unsupervised and took to running the streets.

“Ended up getting into a lot of trouble, incarcerated, tried as an adult at 16, 17. That was a big wake-up call for me,” he told Cardinal Cupich. “A lot of people go to God, especially when they get in trouble. When I heard the jail doors close behind me, I started praying right away.”

It was then that he turned his life around.

“Still, every day it’s a process. That’s why I start my day, every day, by getting on my hands and my knees and starting a time of prayer and reading, reading Scripture. Then I feel like I can go out there and conquer the world or at least do my job and give back because I’ve been blessed so much,” Wahlberg said.

He keeps in daily touch with his parish priest from when he was growing up, Father Ed Flavin, who married him and his wife and all of his siblings and baptized his four children. When Wahlberg decided to turn his life around, the priest was one of the people he looked up to.

Wahlberg, 46, said his biggest mistake was quitting school. Despite having a successful career as an entertainer and businessman, that haunted him, so he got his GED at age 42.

Responding to a young adult’s question about making time for prayer and Mass in a busy life, the actor said it’s a “must.” He goes to bed early every night and wakes up before his family to pray in the chapel he built in his home.

Addressing another audience question about knowing when one has made the right decision in life according to God’s will, Wahlberg shared how he felt God was calling him to more involvement with his faith leading up to the World Meeting of Families and his role as emcee at an event featuring the pope.

Somebody came to speak at the church … they were saying, ‘Are you a participant in the church and the community or are you a spectator?’ And I was like, ‘Whoa.’ I felt like, yeah, I’m a bit of a spectator right now,” Wahlberg said. “I’m coming and getting what I need, but I’m not really giving back, you know, reciprocating the kind of love and support I’m getting.”

Mary Kando of the Assyrian Church of the East, Mar Gewargis Cathedral, also connected to the actor’s faith story.

“Not that my life has been anywhere near his life, but sometimes I feel like, ‘How can I pull myself together?'” Kando said.

A friend invited Kando to (re)Encounter and she was glad she accepted.

“I heard about it but I wasn’t really motivated to go because I didn’t want to go by myself,” she said. “I was looking for something to pull me back in. Not that I was away, but I was just kind of sick of the mundane, ‘It’s just Sunday Mass.’ I wanted to get rejuvenated.”

PREVIOUS: Concern rises over impact of expected tax cuts on programs for the poor