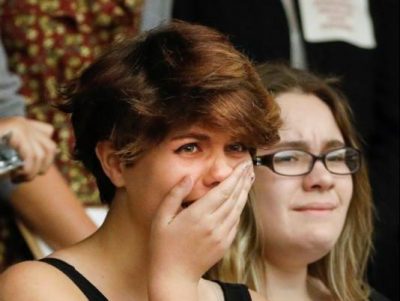 Sheryl Acquaroli and Ashley Santoro, students from Marjory Stoneman Douglas High School in Parkland, Fla., react as they watch the Florida House of Representatives vote down a procedural move to move a bill banning assault weapons from committee to the floor for a vote in Tallahassee. (CNS photo/Colin Hackley, Reuters)

UPDATED – TALLAHASSEE, Fla. (CNS) — About 100 students from Parkland arrived in Tallahassee the evening of Feb. 20, highly motivated to press their state lawmakers in person to reform gun laws after the deadly shooting rampage at their high school.

The afternoon shooting spree Feb. 14 at Parkland’s Marjory Stoneman Douglas High School in Broward County left at 17 people dead and at least 14 injured. Former student Nikolas Cruz, 19, is being held without bond on 17 counts of first-degree premeditated murder in the attack.

According to CBS News, the passion on the gun issue among the students who boarded buses to the state capital “is palpable.” Among their demands were a ban on military-grade weapons and universal background checks.

During a rally outside the state Capitol Feb. 21, several of the Parkland students took the microphone to demand Florida lawmakers vote for changes in gun laws. “Ninety-percent of my fellow Americans support background checks, yet you lawmakers have failed to act,” said Florence Yared, 17. “Some of you said it was too soon to talk about gun control. No, it is not too soon.”

Later, some of the students, wearing blue T-shirts, stood with their chaperones in gallery above the Florida Senate as the lawmakers had a moment of silence to honor the shooting victims.

While the students were en route to Tallahassee, the Florida House of Representatives voted against moving a bill banning assault weapons from committee to the floor for a vote. But Stravitz said she and her schoolmates were not discouraged because they knew their efforts to bring about gun reform would not be easy.

One of the Republican House members who opposed moving the measure out of committee was Rep. Chris Latvala. He told The Wall Street Journal in an interview that he is against keeping guns from law-abiding citizens but supports other measures to curb gun access, such as banning so-called bump stocks, devices used to make a semiautomatic gun act like a fully automatic weapon.

Shortly after the Parkland shooting, Archbishop Wenski issued a statement urging community members to come together “to support one another in this time of grief.”

“With God’s help, we can remain strong and resolute to resist evil in all its manifestations,” the archbishop said. “May God heal the brokenhearted and comfort the sorrowing as we once again face as a nation another act of senseless violence and horrifying evil.”

In Tallahassee, the first stop for the Parkland students was Leon High School, where they listened to a speaker instruct them on how to speak with Florida state legislators about strengthening gun control laws.

Florida Gov. Rick Scott said government officials “have to make changes on school safety.” Florida News Service reported that in the days following the Parkland massacre, he met with leaders from work groups he charged with focusing on education, law enforcement and mental health to get input for legislation he planned to present to lawmakers Feb. 23.

Among the groups’ recommendations were metal detectors at schools, better coordination among agencies and “keeping guns out of the hands of people who are mentally ill,” the news service said.

In Washington Feb. 21 and Feb. 22, President Donald Trump was holding what the White House described as “listening sessions.” He was meeting with high school students, parents and teachers, among others, over the two days in an effort to formulate a response to mass shootings.

Attendees were to include victims of the 1999 shooting at Columbine High School in a Denver suburb and the 2012 shooting at Sandy Hook Elementary School in Newtown, Connecticut.

On Feb. 20, Trump issued a directive to the Department of Justice to draft a federal regulation that would ban the bump stock devices.

In Miami Feb. 21, students at all eight archdiocesan high schools left their classrooms and went either outdoors or to the gym to mark 17 minutes of silence and prayer — one minute for each victim.

“Some schools did a prayer service and some did prayers,” said Kim Pryzbylski, archdiocesan superintendent of schools and senior director of the Secretariat for Education. “Some students were talking about leaving campus and going different places. We didn’t want that to happen. We thought it would be more meaningful to do it as a school community.”

It also was safer for the students to remain on campus.

“This was an organized walkout with a meaningful end,” said Mary Ross Agosta, archdiocesan director of communications.

Both spoke with the Florida Catholic in Miami while returning from a funeral at Nativity Parish in Hollywood for one of the three Stoneman Douglas High School faculty members killed in the Feb. 14 shooting: athletic director Chris Hixon.

Asked if she knew of any archdiocesan high school students who planned to join the March 24 march in Washington, Pryzbylski said, “Not to my knowledge. No.”

Contributing to this story was Ana Rodriguez-Soto in Miami.

NEXT: Rev. Graham dies; world famous evangelist was admired by most Americans