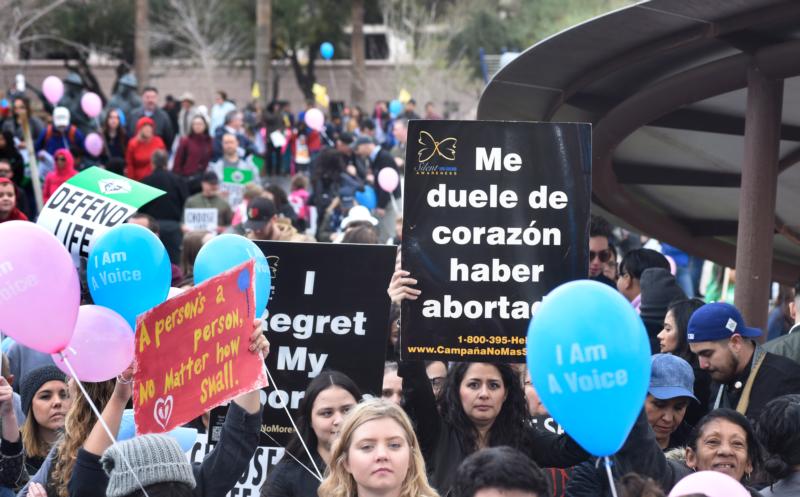 A woman holds a sign in Spanish that translates to “My heart hurts from having an abortion,” during the Jan. 20 Arizona for Life Rally in Phoenix. The event was one of many held across the country to mark the anniversary of the U.S. Supreme Court’s 1973 decision legalizing abortion. (CNS photo/Jesus Valencia, Catholic Sun)

MADISON, Wis. (CNS) — Rain or shine, life is precious and a gift from God.

More than 500 people were probably reflecting on that as they marched from St. Patrick Church in Madison to the Wisconsin Capitol Jan. 22 — the 45th anniversary of the U.S. Supreme Court’s Roe v. Wade decision to legalize abortion at all stages of pregnancy in all 50 states.

Sponsored by the Diocese of Madison, the event was the first of its kind in about 20 years in Madison and was one of many held around the country, including in Washington, to mark the 1973 decision.

“It’s important (to march for life) because it’s exactly what God calls us to do,” said Deacon Jim Hoegemeier, associate director of Madison’s diocesan Apostolate for Persons with Disabilities.

“What we’re called to do is be that model that other people can follow,” he said. “What more important is there than life? That’s why Christ came, to give us life. … We’re marching to basically fulfill what God calls each one of us to do and who to be.”

Before the march to the Capitol, schoolchildren, members of area parishes and staff from diocesan offices gathered for a Rosary for Life and Mass at St. Patrick Church, which is part of downtown’s Cathedral Parish.

Several priests from around the diocese came to pray the rosary and concelebrate the Mass.

Msgr. Kevin Holmes, rector of Cathedral Parish, welcomed all who were there to thank God “for the gift of life and to beg his grace for the legal protection of life in our country.”

Later in his homily, he said the pro-life movement of past four decades has been a “peaceful and serene witness to the dignity and sanctity of human life.”

He called it “the least self-interested social movement in the history of our country. Every single person involved in this movement has already been born. We are not trying to look out for ourselves.”

“One abortion is one too many,” he added.

After Mass, as people exited St. Patrick into the rain, umbrellas were hurriedly opened, hoods were quickly raised over people’s heads, signs were held and a line formed ready to head to the Capitol.

As everyone gathered at the top of the steps, Msgr. Holmes led a prayer of thanksgiving to God for “your countless blessings” and for “the gift of life, which you have made the basis of every other gift that you give us.”

He added in part: “We give you thanks for whatever opposition, scorn, or hatred that we encounter in giving witness to the sanctity of life in accord with the words of your son in the beatitudes that we are blessed because our reward will be in heaven.”

Prayer was followed by 60 seconds of silence for those who have lost their lives to abortion in the past 45 years. More than 60 million lives have been lost to abortion since the high court’s 1973 decision.

The participants went inside the Capitol and took with them one of dozens of roses and the name of a state lawmaker to whom to give it.

Across the country in Arizona, a chilly overcast day did not deter an estimated 4,500 people from gathering Jan. 20 to celebrate life and raise awareness for a growing pro-life movement at the Arizona for Life March and Rally in downtown Phoenix.

Mary Fowler, a 15-year-old who attends St. Timothy Parish in Mesa, Arizona, was excited to carry one of the banners at the start of the march, adding that she is proud to show what she believes in by fighting to end abortion.

“These babies are people too,” Fowler told The Catholic Sun, newspaper of the Phoenix Diocese. “I just wanted to fight for those who couldn’t fight for themselves.”

That was the message of the march and rally, organized by the Arizona Life Coalition — to be a voice for the voiceless.

Phoenix Bishop Thomas J. Olmsted, one of the speakers at the rally, talked of Catholics’ mission to be that voice and to lift up the dignity of human life.

“By God’s providence, you and I are living in 2018,” he said. “It’s God’s plan that we be his sons and daughters, that we be his voice on behalf of the voiceless in this time in history.”

Jim Ward of Blessed Sacrament Parish in Scottsdale, Arizona, said that pro-lifers have been fighting an abortion war ever since Roe v. Wade and feels rallies like the one in Phoenix are necessary to boost the morale of pro-lifers who may feel weary from the battle.

“I think we should show that we are celebrating life, and it’s joyful and beautiful and a blessed thing,” Ward said. “I think that is great as a witness to the whole community, and it’s great for the people here. Sometimes you get tired of working, but it’s nice to be inspired.”

The event began at Cesar Chavez Plaza in downtown Phoenix. Thousands of people then made the roughly one-mile march to hear the speakers.

Marchers carried pink and blue balloons that read, “I am the voice.” Parishes from around the diocese carried banners, and individuals decorated signs with Bible verses, J.R.R. Tolkien quotes and even Dr. Seuss verses.

Jamie Jeffries, who runs the nondenominational group Let Life Live, said she was most looking forward to the actual march because it was a way for her to show Arizona her goal of “having an abortion-free AZ.”

Among the teenagers in attendance was 15-year-old Pierce Vittone of St. Thomas the Apostle in Phoenix.

“I’m looking forward to meeting new people who are with the organization, so I can know how to stand up for life and those who are defenseless,” Vittone said. “These babies don’t have anyone to protect them, and they need people to protect them.”

NEXT: Supporters say vilification of immigrant children, families must stop