Pre-synod meeting is a chance to change the world, youths say 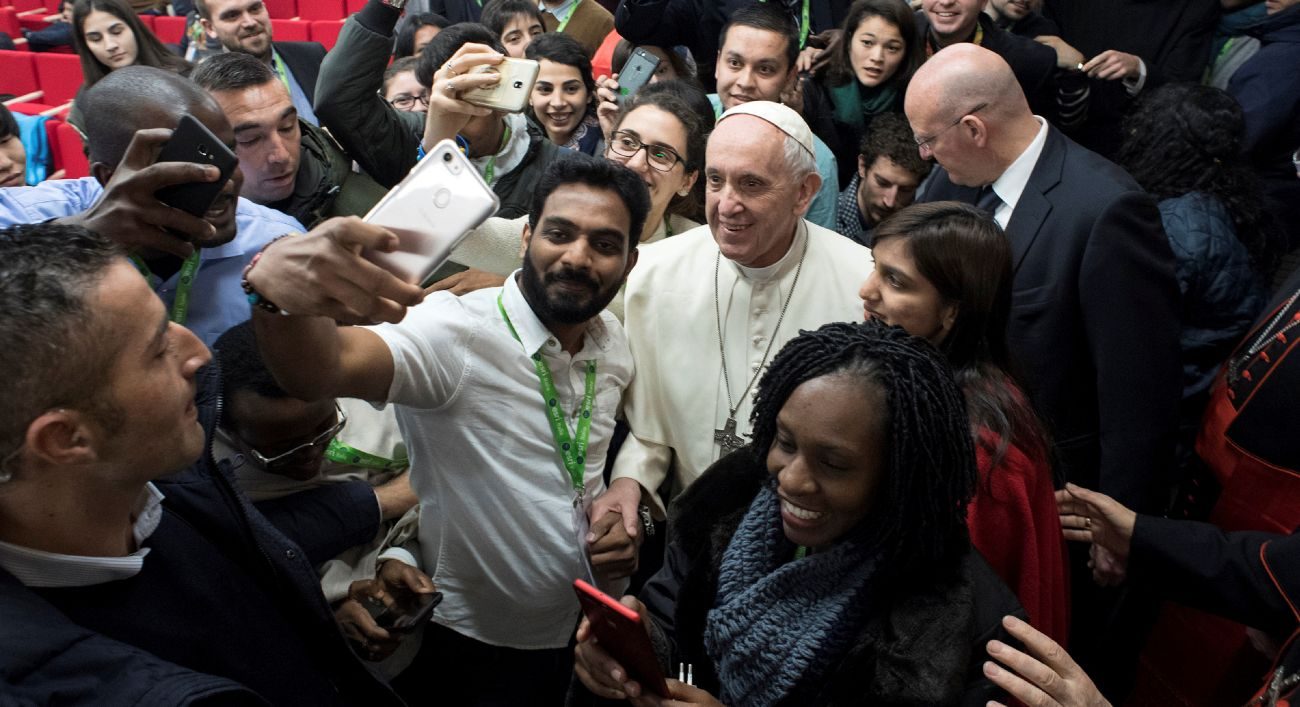 Pope Francis poses for a selfie during a pre-synod gathering of youth delegates at the Pontifical International Maria Mater Ecclesiae College in Rome March 19. The meeting was in preparation for the Synod of Bishops on young people, the faith and vocational discernment this October at the Vatican. (CNS photo/Vatican Media)

VATICAN CITY (CNS) — If the Catholic Church at every level — and governments, too — would listen to young people and give them a voice in decision-making, they could unleash great potential, said two African young adults.

Vincent Paul Nneji of Nigeria and Tinyiko Joan Ndaba from South Africa were among the 305 young adults participating in a weeklong meeting designed to allow young people — involved Catholics and others — to provide input for Pope Francis and the world’s bishops, who will meet in a synod in October to discuss “young people, faith and vocational discernment.”

Nneji told Catholic News Service March 20 that the preparatory meeting offers a chance for young Catholics in his country who are considered “a minority voice” to speak out on important issues.

While struggles with “social injustice, bad leadership, poverty and financial insecurity” are just some of the difficulties facing young Nigerian men and women today, Nneji said, “the major challenge is trying to be a Catholic youth and a light for other people, even in the midst of the conflicts we face in Nigeria.”

African youths today, Nneji added, have “so many things in our hearts we want to express and want to say,” yet they often feel disregarded. Too many, he said, then resort to violence in the hopes of provoking change.

“Sometimes when you’re not allowed to say these things, it’s like a volcano and when it gets so big,” it blows up, he said.

Nneji told CNS he hopes that, through the pre-synod meeting, the whole world “may see a reason for allowing youths to be heard, for allowing (young people) to be part of decision-making, even in society.”

“And of course, in various parts of the world where youths are being exploited and used for various forms of violence, those things will reduce, those things will stop because this time around they will say, ‘We have a platform where we can talk, so we don’t need to carry guns, we don’t need to carry machetes. We just have to go and dialogue,'” Nneji said.

Ndaba told CNS, “I hope that young people can be given a chance to change society because I think we have so much potential.”

“But we can’t do it on our own,” she said. “We need support from the people who have been there before and who can give us direction where to go.”

While the Catholic Church in South Africa is doing its best to prevent future cases of human trafficking, she said, the church also must warn young people of the harm inflicted by those who exploit women, especially when “the demand is coming from Catholics.”

During the opening session of the pre-synod meeting March 19, Blessing Okodion, a young Nigerian rescued from forced prostitution in Italy, asked Pope Francis what could be done to increase awareness of human trafficking.

Pope Francis noted that since the vast majority of Italians are Catholic, the majority of men who use prostitutes in Italy also must be.

“One who goes to a prostitute is a criminal, a criminal,” Pope Francis told the young people. “This is not making love. This is torturing a woman. Let’s not confuse the terms. This is criminal.”

As one of many men and women working a to prevent human trafficking in Africa, Ndaba told CNS she was happy to hear the pope speaking frankly about a “hidden crime” that is “not talked about so much.”

Human trafficking is an important topic for a youth gathering, she said, “because most victims of human trafficking are young people who are trying to find better jobs, a better life so they migrate and traffickers take advantage of that, most especially with young people.