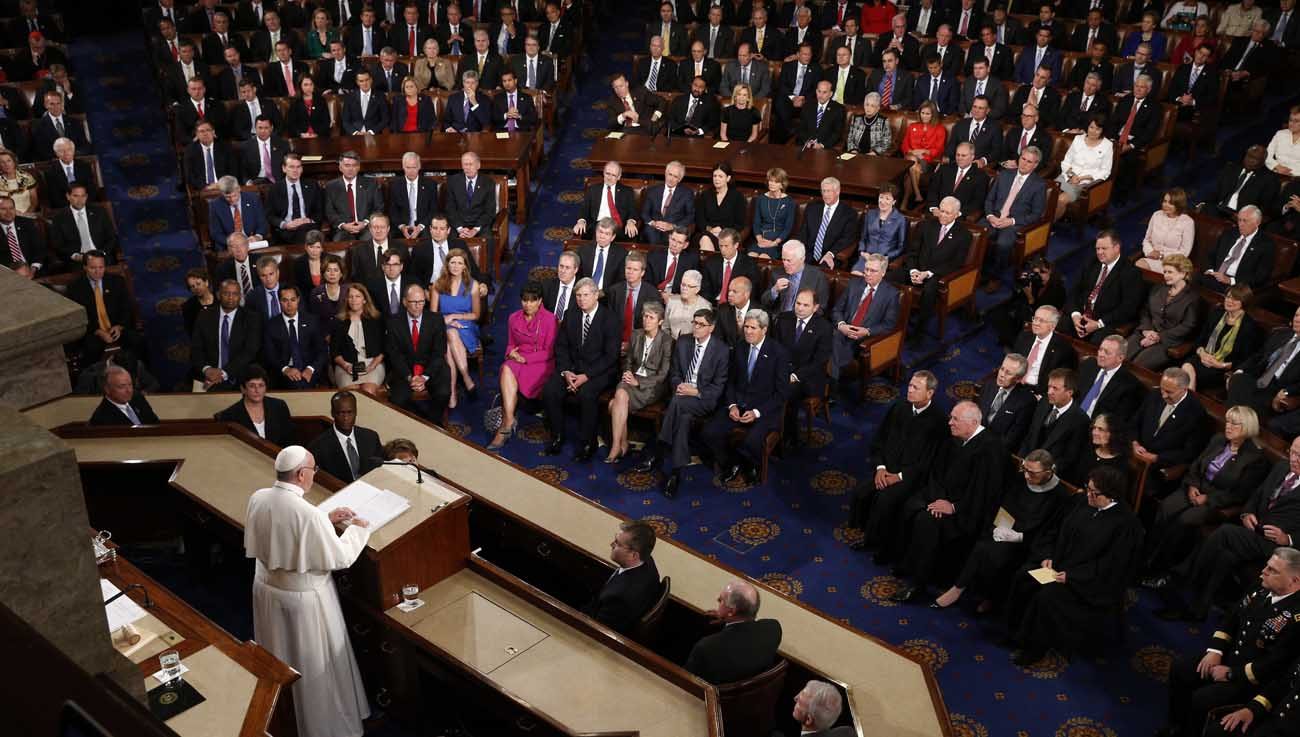 Pope Francis addresses a joint meeting of Congress at the U.S. Capitol in Washington in this Sept. 24, 2015, file photo. As the pope marks his fifth anniversary in the papacy, a new Pew Research poll of U.S. Catholics shows their regard of the pope is, for the first time, colored by their political leanings. (CNS photo/Paul Haring)

WASHINGTON (CNS) — In the advent of Pope Francis’ fifth anniversary in the papacy, a new Pew Research poll of U.S. Catholics shows their regard of the pope is, for the first time, colored by their political leanings.

The survey, released March 6, said it saw “signs of growing discontent with Francis among Catholics on the political right, with increasing shares of Catholic Republicans saying they view Francis unfavorably, and that they think he is too liberal and naive.”

“In our polling about John Paul II and Benedict XVI, when we look at them we don’t see any falloff from them over time,” Greg Smith, a Pew senior researcher, told Catholic News Service. “What’s interesting about this survey that this is the first one where this political polarization among American Catholics really stands out.”

Pope Francis still maintains marks any religious or civil leaders would covet: 94 percent of Catholics say he is compassionate and 91 percent say he his humble — numbers unchanged from a 2015 Pew survey. His overall favorable rating is down one point, from 85 to 84 percent, from a 2014 poll. Those with unfavorable views of the pope were double that of 2014, but still in the single digits at 8 percent.

But “the share of American Catholics who say Pope Francis is ‘too liberal’ has jumped 15 percentage points between 2015 and today, from 19 percent to 34 percent,” the poll said. And 24 percent of U.S. Catholics now say he is naive, up from 15 percent in 2015.

Since 2014, “the share of Catholic Republicans who say Francis represents a major, positive change for the Catholic Church has declined from 60 percent to 37 percent. By contrast, there has been little movement since the end of Francis’ first year as pope in the share of Catholic Democrats who view him as a major change for the better,” the poll said — 71 percent today vs. 76 percent four years ago.

Other groups hold Pope Francis in high esteem, although not as much as Catholics do. Of white mainline Protestants, 67 percent approve of Pope Francis’ tenure, as do 58 percent of religiously unaffiliated adults.

The survey introduced new questions not asked in past polls.

Fifty-five percent of Catholics said the priests at their parish are “very supportive” of Pope Francis. Another 23 percent say their priests are “somewhat supportive” of the pontiff.

The survey further asked Catholics to describe the most significant thing Pope Francis has done in his time as pope. In response, American Catholics named a broad range of accomplishments without being prompted as to specific issues. Nine percent noted Francis’ work in setting a good Christian example, another 9 percent cited his “opening up the church and becoming more accepting.” Eight percent said helping the poor; 7 percent said Pope Francis has made the church more accepting toward gays and lesbians; 6 percent mentioned his global outreach; and 5 percent said he is uniting the Catholic community and encouraging open communication and dialogue.

Four percent each cited two negative or neutral actions: becoming overly involved in politics or alienating conservative Catholics. Another 4 percent of respondents said he hasn’t done anything significant at all, or that they are still waiting to see what he will do. And 29 percent either did not know or could not name any significant thing that Pope Francis has done.

NEXT: A small sampler of Pope Francis quotes