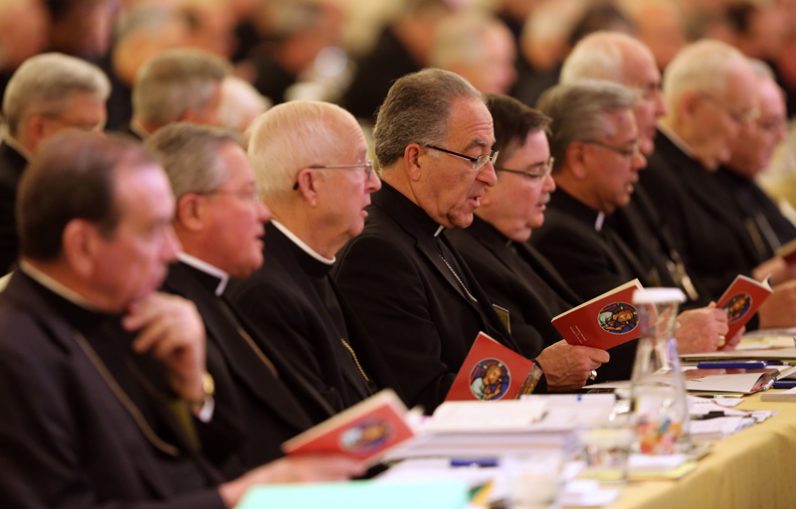 Prelates pray during the 2017 fall general assembly of the U.S. Conference of Catholic Bishops in Baltimore. Discussion and voting on concrete measures to address the abuse crisis and a day of spiritual discernment and prayer will top the agenda for the U.S. bishops when they meet Nov. 12-14 in Baltimore. (CNS photo/Bob Roller)

UPDATED – WASHINGTON (CNS) — Discussion and voting on concrete measures to address the abuse crisis and a day of spiritual discernment and prayer will top the agenda for the U.S. bishops when they meet Nov. 12-14 for their fall general assembly in Baltimore.

Public sessions of the assembly also will be livestreamed live tweeted and carried via satellite, said an Oct. 29 news release from the U.S. Conference of Catholic Bishops.

The assembly will begin Nov. 12 with an address by Cardinal Daniel N. DiNardo of Galveston-Houston, who is USCCB president, as well as remarks by Archbishop Christophe Pierre, papal nuncio to the United States.

The body of bishops will then adjourn to an on-site chapel for a full day of spiritual discernment and prayer. This will be followed by a Mass celebrated at the site of the assembly that evening.

In a letter sent late Oct. 26 to all U.S. bishops, Cardinal DiNardo asked them to spend seven days before the meeting, from Nov. 5 to Nov. 11, in “intensified” prayer, fasting and reparation to prepare for their general assembly in Baltimore.

During their business sessions, the U.S. bishops will discuss and vote on a series on concrete measures to respond to the abuse, including those approved for their agenda at the September meeting of the Administrative Committee.

Actions approved by the committee Sept. 19 and to be voted on include approving the establishment of a third-party confidential reporting system for claims of any abuse by bishops.

Committee members also instructed the bishops’ Committee on Canonical Affairs and Church Governance to develop proposals for policies addressing restrictions on bishops who were removed or resigned because of allegations of abuse of minors or adults.

They also initiated the process of developing a code of conduct for bishops regarding sexual misconduct with a minor or adult or “negligence in the exercise of his office related to such cases.”

In Baltimore the bishops also will hear reports from the National Advisory Council and National Review Board.

They also will vote on a proposed pastoral on racism titled “Open Wide Our Hearts: The Enduring Call to Love — A Pastoral Letter Against Racism.”

“Despite many promising strides made in our country, the ugly cancer of racism still infects our nation,” the proposed document says. “Racist acts are sinful because they violate justice. They reveal a failure to acknowledge the human dignity of the persons offended, to recognize them as the neighbors Christ calls us to love.”

They also will hear a report on the now-concluded Synod of Bishops on young people, the faith and vocational discernment, will vote on a 2019 budget as well as voted for a USCCB treasurer-elect and a couple of committee chairmen and five chairman-elect.

The USCCB announced several of the nominees Oct. 30:

— For chairman of the Committee on Catholic Education: Bishop Michael C. Barber of Oakland, California, and Bishop David J. Malloy of Rockford, Illinois.

Nominees for chairman-elect include:

— For the Committee on Clergy, Consecrated Life, and Vocations: Bishop James F. Checchio of Metuchen, New Jersey, and Bishop Michael F. Olson of Fort Worth, Texas.

— For the Committee on Migration: Auxiliary Bishop Mario E Dorsonville-Rodriguez of Washington and
Bishop John E. Stowe of Lexington, Kentucky.

The bishop also will vote on a new chairman for the Committee on National Collections, to succeed the late Bishop Joseph R. Cistone of Saginaw, Michigan. He was elected chairman-elect for the collections committee last November and was to begin a three-year term as chairman at the end of this year’s general assembly. He died Oct. 16.

Also on the agenda will be a voice vote to endorse the sainthood cause of Sister Thea Bowman, the granddaughter of slaves and the only African-American member of the Franciscan Sisters of Perpetual Adoration. The request comes from Bishop Joseph R. Kopacz of Jackson, Mississippi — where Sister Bowman grew up and also where she ministered in her last years while taking care of her aging parents while subsequently fighting cancer herself.

Public sessions of the discussions and votes during the general assembly as well as portions of the day of spiritual discernment will be available via livestream at: http://www.usccb.org/live.

News updates, vote totals, texts of addresses and presentations and other materials will be posted to this page: www.usccb.org/meetings as soon as possible. Those wishing to follow the meeting on social media can use the hashtag #USCCB18 and follow on Twitter (@USCCB) as well as on Facebook, www.facebook.com/usccb, and Instagram, https://instagram.com/usccb.