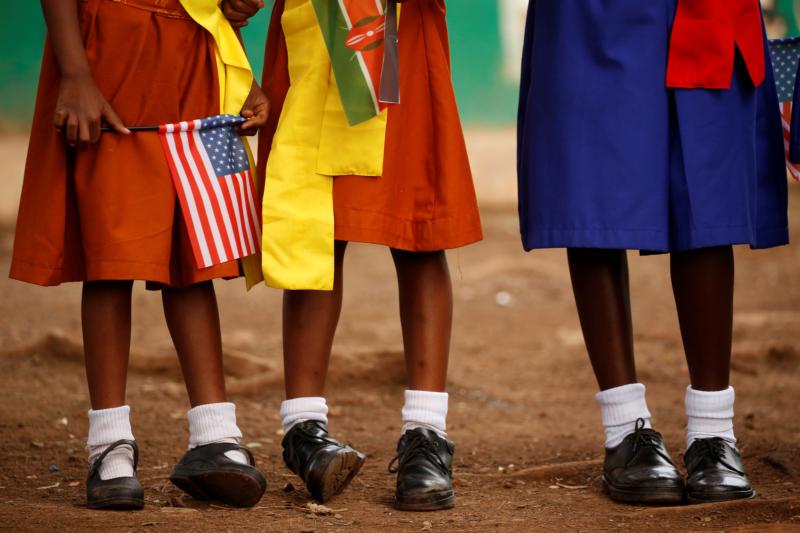 Girls hold U.S. and Kenyan flags as they wait to greet U.S. Ambassador to Kenya Robert Godec as he visits a President’s Emergency Plan for AIDS Relief project for girls’ empowerment in early March in Nairobi, Kenya. Two Catholic leaders Oct. 15 applauded congressional reauthorization of PEPFAR, opening the door for final passage of a bill to keep the program in place for another five years. (CNS photo/Jonathan Ernst, Reuters)

WASHINGTON (CNS) — Two Catholic leaders applauded congressional committees for reauthorizing the President’s Emergency Plan for AIDS Relief, opening the door for final passage of a bill to keep the program in place for another five years.

Citing how the 15-year-old program has saved millions of lives around the world and prevented millions of new infections, Archbishop Timothy P. Broglio of the U.S. Archdiocese for the Military Services, chairman of the U.S. bishops’ Committee on International Justice and Peace, and Sean Callahan, president and CEO of Catholic Relief Services, said in a statement Oct. 15 the program ensures U.S. leadership in the campaign against HIV, AIDS, tuberculosis and malaria.

Funds under the program, known as PEPFAR, support numerous services such as providing free antiretroviral medicines for eligible patients, support for families devastated by AIDS, after-school programs for children whose parents died from the disease and their caregivers, transportation for health services and counseling.

Callahan and Archbishop Broglio said the program is worthwhile even though they hold “principled concerns” about some aspects of PEPFAR and the Global Fund to Fight AIDS through which funds are funneled that are inconsistent with Catholic teaching. Therefore, they said, church agencies do not implement or advocate for them.

CRS, the U.S. bishops’ overseas relief and development agency, has received funding under PEPFAR since 2004. PEPFAR was supported by the USCCB after its staff worked to ensure that conscience protections were included in the law authorizing the program.

PEPFAR “is one of the most successful global health programs in history demonstrating U.S. leadership in saving lives and safeguarding human dignity of the most vulnerable people,” the leaders said.

The number of deaths caused by AIDS and other serious diseases each year has been reduced by one-third since 2002 in countries where the Global Fund invests. The program also has supported 6.4 million orphans, vulnerable children and their caregivers over the years.

“Saving lives and protecting the future of vulnerable children is a proud U.S. legacy thanks to the U.S. Congress,” the statement said.

A final vote on the bill in both houses of Congress is expected this fall.

NEXT: Masses, celebrations in U.S. mark canonization of St. Romero