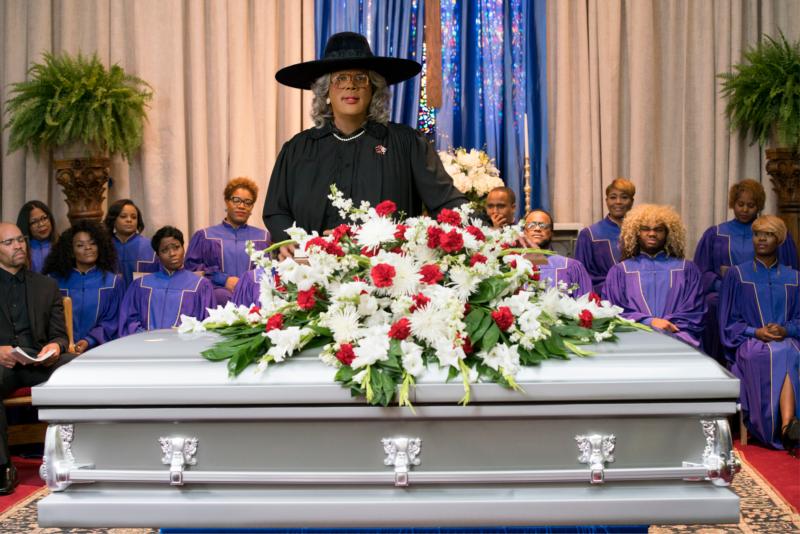 NEW YORK (CNS) — Tyler Perry has given his alter ego Mabel “Madea” Simmons, in what is billed as the final film of her escapades, a sweet and funny valedictory in “A Madea Family Funeral” (Lionsgate).

There’s ribaldry, too, but more earthy than vulgar, and firmly put in harness to the matriarchal moral lesson — call it what is, a homily — that wraps up the picture.

Death, furthermore, has no sting here. Instead it represents merely another opportunity for family members to learn to live their own truth and find happiness.

It’s an immensely satisfying story that returns to the formula of Perry’s successful stage plays. Madea spends most of the movie seated and firing off blunt ripostes, as if writer-director Perry — who not only plays Madea, but her brother Joe, Joe’s son Brian and a new character, legless throat-cancer victim Cousin Heathrow — was reluctant to let her go without allowing her to share everything that’s on her mind.

Making up the rest of the elderly chorus of Cassandras are Aunt Bam (Cassi Davis) and lisping Hattie (Patrice Lovely).

The plot is built around a gathering of Madea’s extended family that ends in an unexpected death. Vianne (Jen Harper) and Anthony (Derek Morgan) are slated to have an anniversary celebration. But at a hotel, Anthony dies during a tryst with family friend Sylvia (Ciera Payton).

This is discovered by AJ (Courtney Burrell), who is having his own affair in the next room with his brother Jesse’s (Rome Flynn) fiancee, Gia (Aeriel Miranda) — and, just as quickly, by Madea and her cohorts. Madea’s tendency to blurt out the raw truth is unrestrained, although the rest of the clan, as per the formula of these tales, fails to listen to her until the end.

She’s likewise scandalized, even though she knows the full story, when Anthony’s considerable intake of Viagra makes the coffin lid difficult to keep closed. This is an ancient gag, but somehow Perry has defanged what could have been a crass dirty joke by making it evidence of sinful activity no one wishes to discuss.

The funeral, a gentle (for Madea, anyway) satire of Pentecostal-style worship, is the centerpiece, shown to take up an exhausting eight hours of singing, prayers and eulogies, even though Madea has limited everyone to two minutes and brusquely kicks off anyone who strays.

With the ritual out of the way, it’s time to set the family straight with Madea’s decidedly nonjudgmental, nonsectarian wisdom about self-esteem and kindness.

The film contains an adultery theme, mature references, including to sexual activity and drug use, some sexual humor, fleeting crude banter and three racial slurs. The Catholic News Service classification is A-III — adults. The Motion Picture Association of America rating is PG-13 — parents strongly cautioned. Some material may be inappropriate for children under 13.

NEXT: Shift your ‘food focus’ this Lent with simple recipes